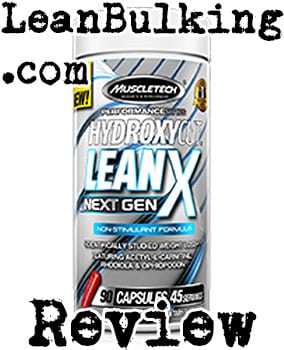 Hydroxycut LeanX Next Gen is a fat burner supplement made by MuscleTech. Were getting an exclusive sneak peak here, so its not actually on sale yet (we dont know the price itll be available yet.

It comes in 45 serving containers, which is a very good number to have. However, one slight issue we have is that Hydroxycut LeanX Next Gen only provides 2 capsule servings daily; studies have shown the optimal number of servings to be 3-4 spread throughout the day, so your body is constantly fuelled-up to burn fat.

Anyway, well analyze Hydroxycut LeanX Next Gens nutrient profile in the next section. But first, well tell those new to supplements more about the company behind it.

MuscleTech are one of the giants in the industry and theres no doubt more experienced gym-goers will know about this company.

Just to put things into perspective, MuscleTech managed to sign Arnold Schwarzenegger to his own series of products at one point (although he later cut ties with the company).

Were excited about their new series of Hydroxycut LeanX fat burners, as their original Hydroxycut series helped secure their reputation in the industry. So lets see which ingredients MuscleTech have decided to add to Hydroxycut LeanX Next Gen below…

MuscleTech has added 9 ingredients to Hydroxycut LeanX Next Gen, which is just below what we believe acceptable. This is great, as having under 10 nutrients allows companies a better chance of dosing their products optimally without pricing them too high.

From first glance, were happy to see some great fat burning ingredients in Hydroxycut LeanX Next Gen, such as Cayenne Pepper Extract and Green Coffee Bean Extract. Other beneficial nutrients such as L-Carnitine have also shown to promote fat loss too.

Another thing we really like is that MuscleTech havent added any potentially harmful nutrients (like Bitter Orange Extract, Synephrine or Yohimbe Bark Extract). This means that there is considerably less risk of side effects, if any at all with Hydroxycut LeanX Next Gen.

However, we would have liked to have seen an ingredient capable of suppressing your appetite here; Glucomannan Extract (Konjac Root) has shown to deliver this benefit, so this could have been an option in Hydroxycut LeanX Next Gen.

Anyway, well take you through each ingredient in Hydroxycut LeanX Next Gen. By the end of this review, youll have a good idea of how safe and effective this fat burner really is. 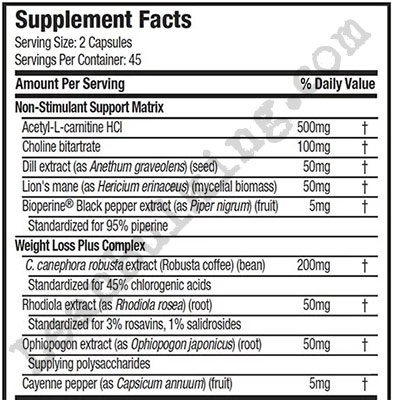 L-Carnitine is a great ingredient, as its shown to help reduce muscular damage and fatigue.

While this is its main function, L-Carnitine has shown to have a slight effect on fat loss too. Regardless of how effective it is at helping you lose fat, one thing is for sure - L-Carnitine is beneficial.

This is probably our least favorite ingredient in Hydroxycut LeanX Next Gen, which means MuscleTech have actually done a great job.

Why? Because Choline Bitartrate has shown to cause an unwanted side effect - fishy odors in your breath and sweat.

In fairness, this isnt exactly a deal-breaker for everyone, so its not going to put many people off. Just on a personal level, wed rather not consume Choline Bitartrate - especially as there are better options to promote fat loss available, such as Green Tea Extract.

So what does Choline Bitartrate do? Well, its believed to help improve your cognition, but there havent been enough studies to make it reliable.

Were not too sure why MuscleTech have added Dill Extract here. Its not a common addition to fat burners, or supplements in general.

However, we believe its because Dill Extract has shown to improve your digestion; this might mean that MuscleTech aimed to boost the absorption rate of Hydroxycut LeanX Next Gen here.

While Dill Extract isnt a key addition to Hydroxycut LeanX Next Gen, it serves as a good bonus ingredient.

Lions Mane Mushroom is a key addition to nootropic supplements, as its tried-and-tested to improve your cognition.

But were not convinced that this is a necessary addition to Hydroxycut LeanX Next Gen; Lions Mane Mushroom hasnt shown to help you shred fat, so we would have preferred an ingredient capable of promoting fat loss, such as Green Tea Extract here.

But as it is useful to improve your cognition that might help you at work, its a useful bonus in Hydroxycut LeanX Next Gen too.

In case youre wondering, this is a patented form of Black Pepper Extract; yes, the same stuff you sprinkle onto your food to enhance its taste.

Its more useful than you think though. Black Pepper Extract has shown to improve your digestion and the absorption rate of supplements that its added to.

Green Coffee Bean Extract is one of the best ingredients in Hydroxycut LeanX Next Gen and is a key fat burning nutrient.

Why? Because its proven to help you lose fat as its a thermogenic, due to containing high amounts of chlorogenic acid.

Its been dosed well here, so MuscleTech have done a great job.

Rhodiola Rosea is a herb thats proven to boost your cognition, which is why we consider it to be a key addition to nootropic supplements.

The slightly bad news is that Rhodiola Rosea hasnt shown to promote fat loss. As a result, we dont believe this is a necessary addition to Hydroxycut LeanX Next Gen.

Saying that, theres nothing bad about having it here, as its not shown to cause any side effects.

Not much is known about this ingredient at all, so were unable to make a judgement about how effective it is here.

This is the first time weve seen Ophiopogon Extract in any supplement, so its certainly interesting (also known as dragons beard). But as its not proven to promote fat loss in any reliable study, we dont consider it to be a necessary addition to Hydroxycut LeanX Next Gen, in our honest opinion.

Well repeat that we would much rather have seen something tried-and-tested such as Green Tea Extract here.

Cayenne Pepper Extract is another key fat burning nutrient, as its hard to argue against it; youll know how spicy these chilli peppers are, and they will make you sweat after eating one.

Well, this raise in body temperature is exactly what boosts your metabolism and promotes fat loss. We would have preferred to have a bigger dosage of Cayenne Pepper Extract here, but were still happy to see that MuscleTech has included it in Hydroxycut LeanX Next Gen. 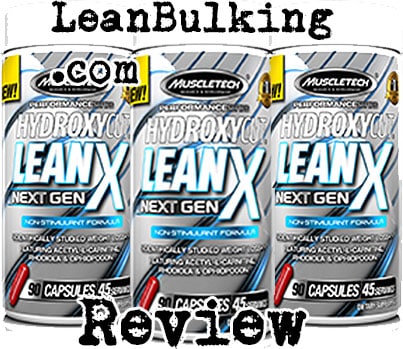 One of the best things about Hydroxycut LeanX Next Gen is that its not going to cause any potentially harmful side effects.

Theres only 1 ingredient that can cause any unwanted side effect at all, which is Choline Bitartrate; studies have shown that this is capable of making your breath and sweat smell fishy.

But overall, this isnt something thats going to put everyone off Hydroxycut LeanX Next Gen.

Heres the potential side effects from taking Hydroxycut LeanX Next Gen:

One small criticism is that we would have preferred MuscleTech to replace Choline Bitartrate with something tried-and-tested to help you burn fat, such as Green Tea Extract. But overall, this is a very respectable fat burner supplement.

The only real bad thing about Hydroxycut LeanX Next Gen is that Choline might make your breath and sweat smell fishy.

But its the small things that make the difference between very good products, and the highest rated fat burners on the market.