See Your Best Options In Our
- Top 3 Test Booster Supplements -

Test Black is a testosterone booster supplement made by MuscleSport. Priced at $89.99 for 30 serving containers on their website, this is one of the most expensive products weve reviewed - so were expecting only the best.

It has a serving size of 4 capsules per day, which is great; this keeps your body fuelled with nutrients, giving it the best chance to raise its testosterone levels.

Anyway, well analyze MuscleSport Test Blacks nutrient profile after telling you more about the company behind it.

To be honest, their about us page on their website was filled with them explaining what exclusive means. As a result, we didnt learn anything new about this company at all.

So lets stop wasting time and get to the main event; the ingredients inside MuscleSport Test Black.

MuscleSport Test Black contains 9 main ingredients that well be analyzing for you today. This is a good number to have in a supplement; we believe that products containing under 10 nutrients have the best chance of being properly dosed.

As we mentioned, MuscleSport Test Black is one of the most expensive testosterone boosters weve reviewed on LeanBulking.com. So were expecting only the best, with optimally dosed ingredients here.

Well take you through each ingredient inside MuscleSport Test Black - so you can see how effective this test booster really is. 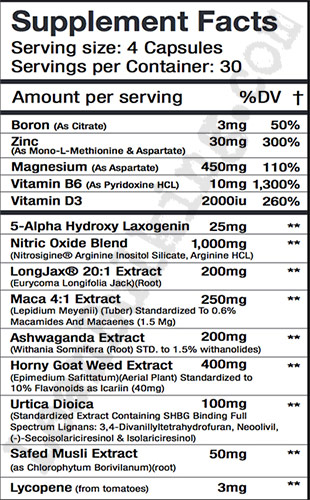 This might sound fancy, but dont be fooled. Its the same species of plant that mustard is produced from.

This is the first time weve seen 5-Alpha Hydroxy Laxogenin in a supplement before. But we can see why its not commonly used - because it doesnt work…

Simply put, studies have shown that 5-Alpha Hydroxy Laxogenin has no effect on your testosterone (or estrogen) levels.

The good news is that this plant hasnt shown to cause any side effects anyway. But there hasnt been enough research to be sure about this.

For this reason, well be staying away from 5-Alpha Hydroxy Laxogenin.

Weve grouped these 2 ingredients together, as theyve shown to have no effect on your testosterone levels in studies.

In fact, were not sure why MuscleSport has included these ingredients; theyre more commonly added to pre-workout supplements, as theyre believed to promote muscle pumps.

However, as Arginine has a poor absorption rate - studies have proven that its mostly ineffective when orally supplemented. So, as these 2 ingredients contain Arginine, they wont do much either.

And well repeat; they have no effect on your test levels.

Also known as Longjack and Tongkat Ali; this is a herb thats been used in ayurvedic (traditional Indian) medicine for a while.

It was believed to raise your testosterone levels. But on further study, it was revealed that Eurycoma only improved your strength and libido in the gym.

These are still useful benefits - but when buying a testosterone booster, you want the end result to be raised test levels.

Maca is another herb thats been used in traditional Indian medicine for a while now. And it also has no effect on your testosterone levels.

However, one positive is that Maca Extract can increase your libido. So its not completely useless. but its definitely not the best ingredient either.

Youre probably not surprised to read that Ashwagandha is another ayurvedic herb. And again, Ashwagandha hasnt shown to raise your test levels at all.

But it can improve your strength in the gym and libido. While its the best from the rest of the ayurvedic herbs, its still not as good as proven nutrients such as Vitamin D3 (which isnt inside MuscleSport Test Black).

You might recognize this by its other name - stinging nettle extract. If youve been stung by this plant before, then youll know where its name comes from.

Anyway, stinging nettle extract has shown to raise your test levels when consumed with other key testosterone boosting ingredients.

Unfortunately, as MuscleSport Test Black doesnt contain any other ingredient proven to work - it wont do much here.

Otherwise known as Chlorophytum Borivilianum; this is another herb thats used in traditional Indian medicine.

Its believed to be an aphrodisiac and raise your libido. However, Safed Musli Extract has only been tested with rats in studies.

As theres no human studies to prove that it works - we consider this to be an unreliable ingredient.

All you need to know about Lycopene; its basically the red pigment responsible for making tomatoes red.

Its not shown to deliver any benefits or raise your testosterone levels - making it useless in MuscleSport Test Black.

Not only that; Lycopene has been reported to cause a few side effects (well expand on this in the side effects section below). 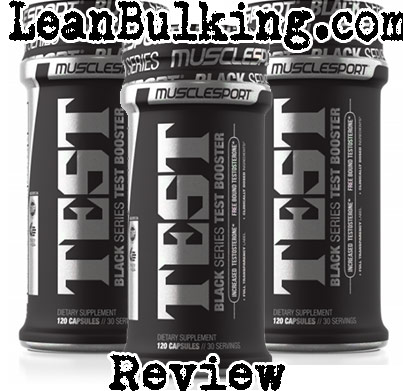 Most of the ingredients inside MuscleSport Test Black are relatively safe. However, there is 1 thats been reported to cause side effects - Lycopene.

We mentioned that Lycopene is a useless ingredient (apart from making tomatoes look red).

Heres the potential side effects from taking MuscleSport Test Black:

Lets be honest here; for $89.99, this is the worst product weve seen for this price. However, it is more expensive than most on the market.

Ultimately, the ingredients inside a product determine how effective it is. And MuscleSport Test Black only contains 1 ingredient shown to positively affect testosterone levels (the others only raise your libido, in our honest opinion).

Personally, when we buy a testosterone booster, we want to experience a rise in test levels (not just libido, although this is a great benefit to have as well).

MuscleSport Test Black isnt worth its $89.99 price tag. You can pick up one of the best test boosters available for less.