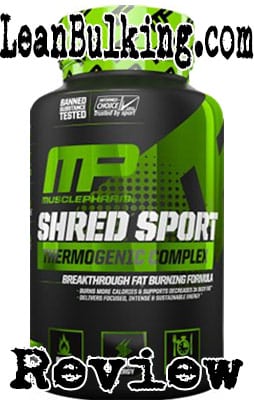 Shred Sport is a fat burner supplement made by MusclePharm. It comes at the price of $26.99 for 30 serving containers, with a serving size of 2 capsules per day.

We prefer fat burners to have a daily serving size of 3-4 capsules spread throughout the day; this keeps your body fuelled with ingredients needed to burn fat and help you get the abs you’ve always wanted!

But what’s most important is whether Shred Sport contains ingredients that are both safe and effective – but we’ll get to that after telling you a bit about the company behind this fat burner (for those that don’t know, if you do then skip go straight to the next section).

MusclePharm is a well established supplements company that’s been around since 2010. They’re based in Denver, Colorado (USA), and we first saw their logo on the shorts of UFC athletes on TV.

Since then, they’ve built a strong reputation and have matched the giants of the industry. So we’re looking forward to seeing whether Shred Sport can live up to this reputation – we’ll analyze everything below.

MusclePharm’s Shred Sport contains 8 ingredients overall, which is a good number to have – not too little and not too many. But we’re only interested in whether these ingredients are safe and effective; if they are, then this will prove to be a great fat burner.

From first glance, we like that MusclePharm has included one of our favorite fat burning ingredients (Chilli Pepper Extract). However, we’re also concerned as there are 2 sources of stimulants inside – Caffeine and Theacrine.

Anyway, we’ve analyzed each ingredient inside Shred Sport – to show you how good this fat burner really is. 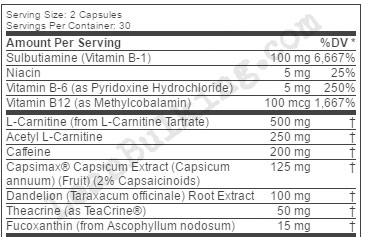 This is a form of L-Carnitine that’s shown to reduce fatigue while boosting your focus in the gym. For this reason, L-Carnitine is a great addition to a pre-workout supplement – but it’s not as useful in fat burners, as it hasn’t shown to help you shred fat.

Also known as ALCAR, this offers the same benefits as L-Carnitine-L-Tartrate – but it’s a bit more beneficial in fat burner supplements. This is because studies have shown ALCAR has a slight effect on promoting fat loss.

However, it’s not really good enough to justify adding into a fat burner for this reason; but reduced fatigue isn’t a bad benefit to have in a fat burner either, just not a key one. There’s no negatives to having ALCAR in MusclePharm Shred Sport, so it’s no problem.

Caffeine is our favorite stimulant in any supplement; it’s proven to boost your energy, strength, endurance, and focus in countless studies. It’s the sole reason why tea & coffee are so popular (and why Starbucks have become such a big company).

MusclePharm Shred Sport also contains another stimulant (Theacrine), but we’ll expand on this later in this section.

As we’ve mentioned, this is one of our favorite fat burning ingredients for one reason – it works. And the best thing is you can actually feel this working.

Simply put, if you’ve had a spicy meal before, you’ve probably ended up sweating in the restaurant. Well, this increase in body temperature is exactly what boosts your metabolism; as your body works harder to cool itself down, it uses more calories and is more likely to use your body fat as fuel.

You can’t argue with this one as it’s backed by numerous studies and has been known as a ‘thermogenic’ for a long time.

Also known as Taraxacum Officinale, this is believed to be a diuretic (meaning it encourages your body to pass more urine and reduce the amount of water in your body). However, this isn’t needed in a fat burner and is actually a gimmick.

Why is it a gimmick? Well, losing water weight can fool you into thinking you’ve lost body fat – but this won’t be the case. In fact, it’s actually unhealthy to become dehydrated, and if you’re not aware you’re taking a diuretic, then you can be at risk of becoming severely dehydrated.

For these reasons, we avoid fat burners containing diuretics. If you want this effect, then it’s safer to sit in a sauna.

Theacrine is quite a recent discovery (as of 2017), and is simply another source of stimulant like Caffeine. Studies have shown that it might be useful, as it’s believed that humans don’t build a tolerance to Theacrine – which would make it better than Caffeine in long term usage.

However, the first problem is that it’s not been studied enough for Theacrine to be reliable or safe. Not only that; MusclePharm Shred Sport already contains Caffeine, so there’s no need to have another stimulant in this fat burner.

Simply put, having 2 stimulants in 1 fat burner increases your risk of suffering from jitters and energy crashes. For this reason, we recommend that you stick to fat burners that only contain 1 source of stimulant (for now, Caffeine Anhydrous is the safest and most effective form of stimulant on the market).

Fucoxanthin is an uncommon ingredient in fat burners, but here’s what you need to know; it’s a brown pigment found in seaweed, believed to promote fat loss.

However, there hasn’t been enough studies conducted on Fucoxanthin to make it reliable. For this reason, we prefer to stick to ingredients that’re proven to work instead (such as Green Tea Extract, which unfortunately isn’t in MusclePharm Shred Sport). 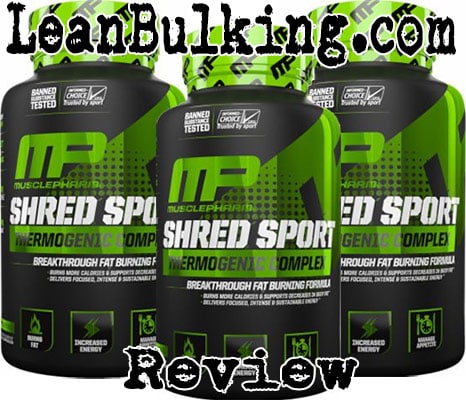 We have 1 concern with MusclePharm Sport Shred – it contains 2 stimulants (Caffeine & Theacrine), which increases your risk of jitters and energy crashes.

Here’s the potential side effects from taking MusclePharm Shred Sport:

If MusclePharm hadn’t added Theacrine into Shred Sport, then we would’ve rated this higher. However, having both Caffeine and Theacrine in 1 fat burner always increases your risk of side effects – and no-one wants to pay for a supplement that might make them feel like sh*t.

However, we don’t want to criticize MusclePharm Shred Sport too much; it’s not the worst fat burner we’ve seen, and we like that it doesn’t contain any banned ingredients or nutrients shown to cause harmful side effects consistently.

We can’t recommend this, as we’ve reviewed and tried fat burners with much better ingredients (that haven’t caused any side effects).