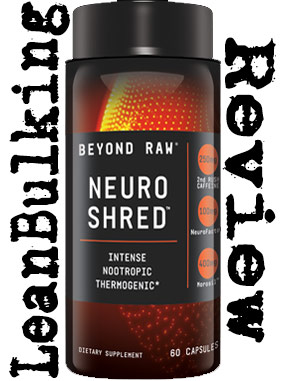 Neuro Shred is a fat burner supplement made by Beyond Raw Labs. It comes at the price of $49.99 for 30 servings (on GNC), with a serving size of 2 capsules per day.

We prefer serving sizes of 3-4 capsules, spread throughout your day; this keeps your body topped up with essential fat burning ingredients needed for you to reach you goals. Consuming all these ingredients in 2 servings will give you a spike for a few hours, then you’ll experience no more benefits for the rest of your day.

Anyway, we’ll tell you a bit about the company behind Neuro Shred, before analyzing the ingredients inside this fat burner.

Who are Beyond Raw Labs?

Beyond Raw Labs are a USA-based supplements company that offer a variety of products – ranging from a pre-workout called LIT (which we’ve also reviewed), and even a mass gainer protein powder.

There wasn’t much more information available about this company, so we’ll move onto the ingredients section below.

From looking at Neuro Shred’s ingredient list, we can see that it only contains 6 ingredients; we like this, as there’s too many fat burners filled with over 10 ingredients that aren’t needed.

But it’s important that Beyond Raw Labs has added safe and effective ingredients into Neuro Shred. Basically, the ingredients make or break a supplement – so we’ll be using our expertise to show you whether this fat burner will work or cause any side effects.

At first glance, we like that Beyond Raw has added one of our favorite fat burning ingredients inside (Chilli Pepper Extract); we love this in both our food and supplements, as really kicks your metabolism into gear.

Anyway, you’ve heard enough about our first impressions…let’s see what’s really inside Neuro Shred, so you can see how good this fat burner really is. 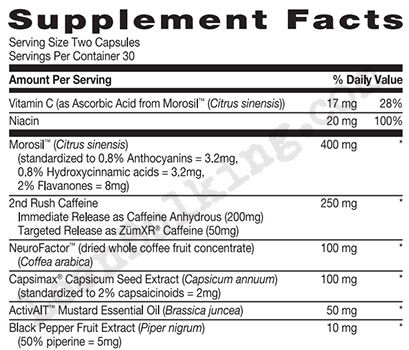 This is a group of oranges that includes the common sweet orange and blood orange. Don’t mix this up with ‘Citrus Auranium’ (which is also known as Bitter Orange), as that’s been banned in numerous countries due to causing harmful side effects.

However, it’s not shown to be very useful in fat burners (or any other supplements); simply put, it hasn’t shown to promote fat loss – making it ineffective here.

We believe Beyond Labs has added Citrus Sirensis in Neuro Shred, as it’s shown to improve blood flow and help your brain perform slightly better; this is due to the Hesperidin inside Citrus Sirensis. Judging from the name of this fat burner, Neuro Shred is designed to promote cognition too – but we don’t see the need for a fat burner to offer improved brain function too.

Personally, we prefer to take a specialist Nootropic supplement when we need a boost in cognition, and a specialist fat burner when we’re wanting to get our abs back. Not only that, there are much better ingredients proven to improve brain performance more than Citrus Sirensis anyway.

There are 2 sources of Caffeine in Neuro Shred: Caffeine Anhydrous and ZumXR.

Basically, Caffeine Anhydrous is the most commonly used source of Caffeine that’s proven to be safe and effective – so there’s no need to have another Caffeine source alongside this.

So what’s ZumXR? Well, it’s marketed as a ‘time release’ Caffeine…but think about it, do you want the effects of Caffeine to keep you up at night? We don’t think it’s a good idea for Caffeine to be in your system for longer than it is naturally as part of a ‘time release’ formula; anyone who’s consumed coffee too late in the evening will know that it stops you from sleeping.

Call us old fashioned, but we’ll stick to what’s proven to be safe and effective (Caffeine Anhydrous).

Not only that, there’s a problem with the dosage due to the low serving sizes; you’ll be consuming 125mg Caffeine in each capsule, which is quite alot. This is a great example of why we prefer fat burners with serving sizes of 3-4 spread throughout the day, so you don’t get the big dosages of ingredients all at once…or twice in this case).

To stay safe from jitters or energy crashes, we recommend checking that fat burners contain less than 100mg Caffeine per capsule.

This is extracted from the middle of the coffee bean (known as Coffee Fruit). It’s believed to improve your cognitive function, but no studies have actually proven that it works. Again, we don’t see the need for a fat burner to offer improved cognition – but if we were Beyond Labs formulating Neuro Shred, we would’ve replaced this with Lion’s Mane Mushroom instead (as this is proven to boost brain function).

However, as this is primarily a fat burner, we would’ve preferred to see an ingredient such as Green Tea Extract instead; simply put, Green Tea Extract has shown to promote fat loss and has been used for centuries in Asia.

This is one of our favorite ingredients in any fat burner, but you might not know what ‘Capsicum’ is, so let us explain; they’re more commonly known as chilli peppers and it’s the official name for these species of peppers.

If you’ve ever eaten spicy dishes (such as curries), then you’ll know that chilli peppers can make you sweat. Well, this raise in body temperature is exactly what boosts your metabolism (ultimately increasing your fat burning potential). As you’re body has to work harder to cool itself down, it uses more calories to do this – promoting fat loss.

For this reason, we always look for fat burners that contain chilli peppers inside – studies have proven that they’re both safe and effective to help you get those abs!

More commonly known as Brown Mustard or Green Mustard Cabbage, it’s a species of mustard plant. While it can improve your general health due to being vitamin rich, it’s not shown to directly promote fat loss in any studies – making it ineffective in Neuro Shred.

We would’ve preferred an ingredient that supresses appetite instead here; in our experience of using fat burners, ingredients that can keep you full for longer can makecalories much easier for you (resulting in more fat loss). This is definitely something that’s missing in Neuro Shred that Beyond Labs should’ve thought about.

This is the same Black Pepper used to season your food and make it taste better – if you’ve seen Hell’s Kitchen, you’ll know that Gordon Ramsay loves this stuff…

Anyway, you might not know this, but Black Pepper Extract has shown to improve digestion and the absorption rate of supplements it’s added to. Although it won’t make an ineffective product great, it can definitely be a great bonus ingredient to have.

The good news about Neuro Shred, is that none of the ingredients have shown to cause any side effects. However, as there’s 125mg Caffeine in each capsule, you might want to avoid taking this late in the evening (as it might keep you up).

As we’ve mentioned, this is why we prefer fat burners that come with daily serving sizes of 3-4 capsules – so the Caffeine and other ingredients are more split up into smaller dosages, making it easier for your body to process and stay topped up at optimal levels with.

We can see why Beyond Raw Labs has tried to make a unique product when there’s hundreds of fat burners on the market, but it hasn’t paid off.

There’s simply no need for a fat burner to offer improvements in cognition; personally, we buy fat burners when we’re looking to get our abs back after enjoying ourselves a bit too much (not when we’re looking for a boost in brain performance…that’s what Nootropics are made for).

Not only that, Neuro Shred contains some ineffective ingredients that could’ve been replaced by those proven to promote fat loss – such as Green Tea Extract and our favorite ingredient in any fat burner, Glucomannan (this expands in your stomach keeping you full for longer, helping to reduce your calorie intake).

In our honest opinion, Neuro Shred can’t compete with the best fat burners on the market right now.

Personally, we would prefer to spend a bit extra and get a specialized fat burner supplement that’s proven to help you get that 6-pack you’ve always wanted.