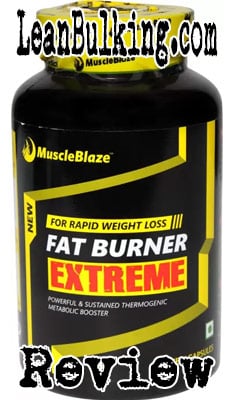 Fat Burner EXTREME is weight loss supplement made by MuscleBlaze. We found this product on Amazon for  1,124.00 Indian Rupees (around $20) for 90 serving containers.

This might sound like a great deal at first, but we realized that the serving size was 1 capsule per day. This isn’t great, as studies have revealed that 3-4 capsules per day is the best serving size; it’s more likely to fuel your body with fat burning nutrients (1 capsule will only stay in your system for 2-3 hours maximum).

Anyway, it’s always interesting to see whether a popular fat burner in India, would be able to compete with the highest rated fat burners in the USA. So we’ll analyze Fat Burner EXTREME’s nutrient profile after telling you more about the company behind it.

MuscleBlaze are a supplements company based in India. They haven’t managed to penetrate markets in different countries, but we believe that they remain very popular in India.

This company has released a wide range of supplements, from protein powders, pre-workouts and fat burners such as MuscleBlaze Fat Burner Extreme.

So let’s see which ingredients are inside this product, and whether it’s worth trying out or not, in the next section below…

Ultimately, this is the most important section of this MuscleBlaze Fat Burner Extreme review.

Why? Because companies can hide behind fancy advertisements and marketing, but they can’t lie about what ingredients are inside their supplements.

Every product has to list each ingredient inside, so this is exactly what we’ll be analyzing for you here. By the end of this review, you’ll know exactly how effective this fat burner is, and whether it’s worth trying out.

We have mixed first impressions about MuscleBlaze Fat Burner Extreme. This is because this product contains some great nutrient such as Green Coffee Extract & Cayenne Pepper Powder.

However, it also contains some potentially harmful ingredients such as Yohimbe. We’ll explain eveything in more detail, so read on to find out.

To show you how effective MuscleBlaze Fat Burner Extreme is, we’ll take you through each ingredient inside. 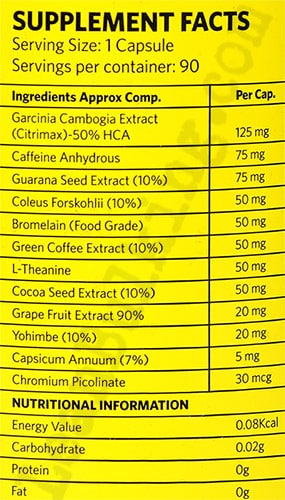 If you’re wondering what this is, Garcinia Combogia Extract is a fruit that’s known for being able to enhance the taste of foods.

It’s also believed to improve the satiety of your meals, but this hasn’t been proven in any studies. As a result, we consider this ingredient to be an unnecessary addition to MuscleBlaze Fat Burner Extreme.

Caffeine is the best stimulant you can find in any supplement.

It’s proven to raise your energy levels; this makes it the perfect addition to any fat burner supplement, especially while you cut calories and carbs from your diet.

However, it’s important to know that you shouldn’t consume more than 100mg per capsule. If you intake more at one time, then you’ll put yourself at risk of jitters and energy crashes.

In case you’re not aware, Guarana Seed Extract is another source of caffeine (meaning it’s a stimulant).

It’s not a good idea to consume 2 stimulants in 1 supplement, as this increases your risk of suffering from side effects such as jitters and energy crashes.

We just mentioned that there was a good dosage of Caffeine Anhydrous in MuscleBlaze Fat Burner Extreme. However, when you add that to the 75mg Guarana Seed Extract per capsule, then you’re likely to suffer from jittery side effects.

For this reason, we would have preferred MuscleBlaze to have left Guarana Seed Extract out of MuscleBlaze Fat Burner Extreme.

Coleus Forskohlii is a very interesting ingredient; it’s quite a new discovery in the industry, and hasn’t proven to be reliable at doing anything yet.

However, some believe that it could improve your testosterone levels while promoting fat loss too.

Ultimately, if it’s shown to deliver these benefits reliably, then Coleus Forskohlii will be 1 of the best ingredients available. However, as it’s not tried-and-tested, we have to consider this an unreliable nutrient.

But saying that, we’ll be keeping a close eye on this ingredient for the future.

You might have heard about this nutrient before, as it’s contained in pineapples. The main benefit, is that it can help you digest protein, as well as improve your general health.

However, these aren’t really advantages that are necessary when taking MuscleBlaze Fat Burner Extreme. For this reason, we have to consider Bromelain as an unnecessary addition to this fat burner.

If you’re still interested in consuming this nutrient, then simply add pineapple to your diet…

Now, this is an ingredient worth talking about. Simply put, Green Coffee Bean is a key fat burning nutrient that’s proven to boost your metabolism and promote fat loss.

For this reason, we’re always happy to see that companies have completed some research to add this into their supplements. However, as MuscleBlaze Fat Burner is a cheap supplement (1,124.00 Indian Rupees/around $20), this shows in the dosage of this nutrient.

Basically, the optimal dosage of Green Coffee Bean Extract is 500mg+ per serving. As MuscleBlaze Fat Burner Extreme only contains a tiny 50mg serving, it’s not likely to work here.

Ultimately, this is a great example of why you should check the ingredient list for each supplement; carefully checking the ingredients and their dosages, to see whether it’s actually going to work.

While L-Theanine is a key addition to a pre-workout supplement or nootropic, it’s not necessary in a fat burner.

Why? Because it’s main benefit is working with Caffeine to enhance your cognition.

However, there’s also nothing wrong with having this in here either. If MuscleBlaze Fat Burner Extreme contained more key fat burning ingredients, then L-Theanine would have been a great ‘bonus’ to have here.

But ultimately, we would have preferred to see a nutrient that’s tried-and-tested to promote fat loss instead (eg. Green Tea Extract).

You might be wondering why Cocoa Seed Extract has been added into MuscleBlaze Fat Burner Extreme.

Well, this is because it contains Theobromine, which is another stimulant. As you should know by now, this is bad news, because it adds to the already high amount of stimulants in this fat burner – making it almost certain for you to suffer jitters and energy crashes.

We always advise you to only consume products that contain under 100mg Caffeine per capsule as it’s only stimulant source, so you stay safe from side effects.

Grapefuit Extract is basically just added to improve your general health. It contains antioxidants to help you, but ultimately it has no effect on the rate you burn fat at.

For this reason, we consider Grapefruit Extract to be an necessary addition to MuscleBlaze Fat Burner Extreme.

Yohimbe is known for being a potentially harmful ingredient. It’s structurally similar to Yohimbine, which has been banned in countries such as the UK & Canada.

We will acknowledge that Yohimbe has shown to help you lose weight. But we don’t think the side effects you might suffer are worth it – especially when there are safe and effective nutrients available.

For this reason, we advise you to avoid Yohimbe when choosing a fat burner supplement – to stay safe.

This is a species of chilli pepper, which is a great thing. Basically, chilli peppers have proven to boost your metabolism by process of thermogenesis; importantly, this has shown to help you lose fat a an accelerated rate.

As a result, we always consider any form of chilli pepper (such as Cayenne Pepper) to be a key addition to any fat burner supplement. Good job by MuscleBlaze here.

Now, this is an essential mineral that helps to regulate blood glucose levels, promoting fat loss.

It’s naturally found in green vegetables such as brocolli (if you didn’t know why broccoli was so healthy, then you do now). For this reason, Chromium Picolinate is a useful addition to MuscleBlaze Fat Burner Extreme. 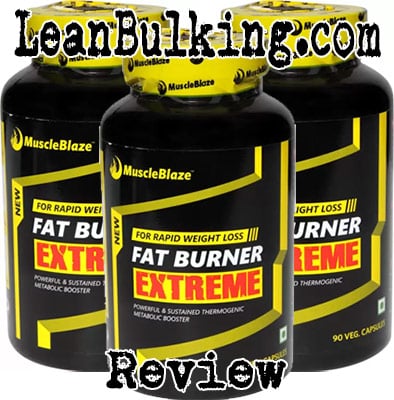 There are 2 main concerns with MuscleBlaze Fat Burner Extreme; it contains Yohimbe, which has proven to cause numerous side effects, as well as 3 different stimulants.

Remember that you should only consume 100mg Caffeine per capsule when taking fat burner supplements; this will ensure you stay safe from jitters and energy crashes, but unfortunately, MuscleBlaze Fat Burner Extreme contains much more overall.

Ultimately, MuscleBlaze Fat Burner Extreme is one of the cheaper fat burners on the market. For this reason, we can’t expect it to be able to compete with the more premium, higher rated supplements available.

However, we wouldn’t recommend you to consume MuscleBlaze Fat Burner due to it containing Yohimbe (which has commonly been reported to cause numerous side effects, as you ca see above).

Not only that, we advise you to look out for the overall amount of stimulants in fat burner supplements; MuscleBlaze Fat Burner Extreme contains a good dosage of Caffeine Anhydrous on its own, but it also contains 2 other stimulants (Guarana Seed Extract & Cocoa Bean Extract), which makes it likely that you’ll suffer from jitters.

As a result, personally, we would save up more money and buy a fat burner that’s tried-and-tested to work.

MuscleBlaze Fat Burner Extreme might be a cheap supplement, but it lacks nutrients that actually work, in the right dosages.

For this reason, it’s easy to see where the costs have been cut.

We don’t believe that MuscleBlaze Fat Burner Extreme is able to compete with the highest rated fat burners on the market.