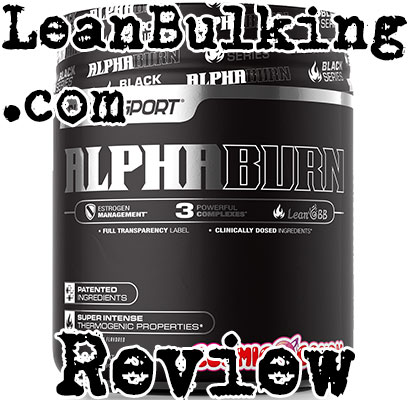 It costs $69.99 for 30 serving containers, which is quite a normal price for a fat burner supplement, but would be every expensive for a pre-workout. So whether this is highly priced or not depends on how you view this supplement.

We’ll be reviewing AlphaBurn as mainly a fat burner supplement, as that’s how we believe it’s been marketed to be. So we don’t believe that AlphaBurn’s 1 daily serving size is optimal; studies have shown that 3-4 servings spread throughout the day is better at keeping your fuelled in body in fat burning mode for longer.

Anyway, we’ll expand on this when we analyze AlphaBurn’s nutrient profile in the next section. But first, we’ll tell you more about the company behind it.

MuscleSport have marketed themselves to be a premium supplements company, which is reflected in the pricing of their supplements. We personally don’t mind paying extra for supplements if it means getting a higher quality product, so this doesn’t bother us.

However, we would have liked to have been shown the year MuscleSport was founded, among other important information about the company. But in fairness, none of this affects the quality of AlphaBurn.

Let’s be honest too, you’re really here to learn more about AlphaBurn, so let’s see which ingredients have been added below…

AlphaBurn contains 12 main ingredients overall, which we would usually consider to be more than necessary; from personal experience, we’ve found that products packed with more than 10 nutrients are usually under-dosed.

But from first impression after looking at AlphaBurn’s nutrient profile, we’re happy to see good dosages of many ingredients. We’re also especially happy that MuscleSport haven’t hidden any ingredients in any proprietary blends – so you can see the exact dosages of each ingredient in AlphaBurn.

But one issue we have, is that AlphaBurn contains Rauwolscine; this has been reported to cause side effects by users in the past.

Anyway, we’ll expand on this as we take you through each ingredient in AlphaBurn. By the end of this review, you’ll have a good idea of how safe and effective this fat burner really is. 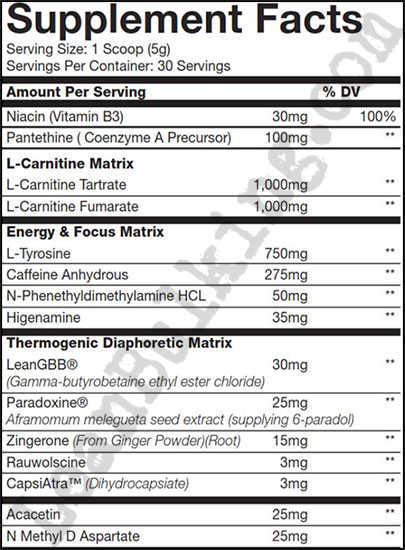 We’ve grouped these 2 ingredients together, as they mainly deliver the same effects; they’re both slightly different forms of L-Carnitine, which is known for being able to reduce muscular fatigue and damage.

As a result, we consider L-Carnitine to be a key addition to pre-workout supplements. But remember that AlphaBurn is mainly marketed as a fat burner.

Even so, L-Carnitine has shown to have small effects on fat loss, so it’s certainly not the worst ingredient MuscleSport could have added here. Not only that, we’re happy to see that they’ve added optimal dosages of both L-Carnitine forms.

L-Tyrosine is a ‘brain booster’ ingredient that’s proven to enhance your cognition. However, a boost in focus or memory isn’t really needed when taking fat burner supplements; simply put, the main reason you buy these supplements is to try and lose body fat.

Ultimately, L-Tyrosine has no effect on fat loss, so it’s not necessary in AlphaBurn here. But saying that, as it doesn’t cause any side effects, it can be a good ‘bonus’ nutrient to have.

Caffeine Anhydrous is the best stimulant you can find in any supplement; it’s proven to be safe and effective, due to being a pure, dehydrated form of caffeine.

But as you know after consuming too many coffee’s, consuming large dosages of Caffeine Anhydrous can cause jittery side effects.

So in our honest opinion, AlphaBurn would put many people at risk of jittery side effects and energy crashes. Only those very tolerant to Caffeine would benefit from this huge 275mg dosage here.

Also known as Eria Jarensis Extract, it’s a stimulant that’s believed to be effective at promoting fat loss. Not only that, it’s thought to be very similar to DMAA in chemical structure too, but this could mean that it’s potentially harmful too.

Ultimately, DMAA was banned due to causing harmful side effects, so we’d personally feel safer avoiding anything similar to DMAA too. We would have much preferred to see something proven to be safe and effective instead, such as Green Tea Extract.

Higenamine is another ingredient that’s believed to be an effective fat burner with limited evidence backing it.

As there simply isn’t enough studies proving it to be effective, we can’t consider it to be a reliable addition to AlphaBurn. Again, we’ll repeat that we would have preferred to see something tried-and-tested such as Green Tea Extract instead.

LeanGBB is a patented form of gamma-butyrobetaine ethyl ester chloride. It’s a precursor to L-Carnitine and is believed to work in syngergy with L-Carnitine to promote fat loss.

However, for us personally, there isn’t enough evidence to prove that it’s effective. Ultimately, this is only our honest opinion, and call us old fashioned, but we would much prefer something proven such as Green Coffee Bean Extract instead.

In case you’re unaware, this is a patented form of Aframomum Melegueta (also known as Grains of Paradise). It’s a peppery spice that works in a similar manner to chilli peppers; Grains of Paradise is able to raise your body temperature, which boosts your metabolism and encourages your body to burn more calories.

You can’t really argue whether this is effective or not, as you’ll experience its thermogenic effects after eating it. Good job by MuscleSport here.

Ginger Root is known for its ability to help treat nausea, but it’s also believed to possess thermogenic abilities too. The problem is that there haven’t been enough reliable studies to prove that it’s able to promote fat loss, in our honest opinion.

We would have much rather preferred to see an ingredient capable of suppressing your appetite instead.

Rauwolscine is a molecule that’s basically an alternate form of Yohimbine; just in case you don’t know, Yohimbine has been reported to cause side effects by users in the past, so it’s something that we try to avoid.

In our honest opinion, Rauwolscine hasn’t proven itself to be any safer than Yohimbine. For this reason, we don’t believe that it’s a very good addition to MuscleSport.

This is a patented form of Dihydrocapsiate, which is a capsinoid found in chilli peppers. It’s shown to be able to deliver a small thermogenic effect to promote fat loss, so it’s definitely one of the better nutrients in AlphaBurn.

Acacetin is a form of o-methylated flavone that can be derived from natural sources, including black locust plant. We don’t really understand why MuscleSport have added this into AlphaBurn, as it has no fat burning effects.

So what does it do? Well, Acacetin is believed to limit estrogen levels and work as an anti-aromatase.

To explain this, it’s going to take a lot of scientific terms and facts that’s probably going to bore the sh*t out of you. So just know that N-Methyl-D-Aspartate hasn’t shown to help promote fat loss in AlphaBurn. 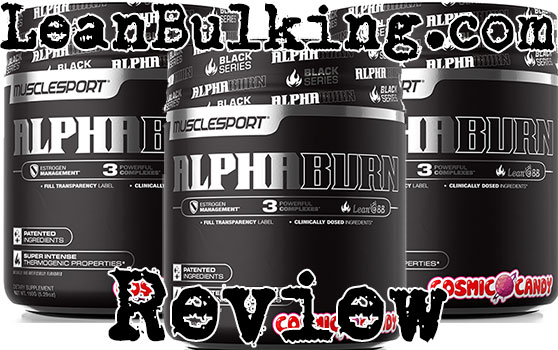 While the majority of ingredients in AlphaBurn are safe from side effects. But there are a few things that can potentially put you at risk; there big dosage of Caffeine Anhydrous might cause those with a low tolerance jittery side effects, and Rauwolscine has been reported to cause nausea, among other side effects too.

However, this doesn’t mean that you’re likley to suffer these side effects. We’re simply using our honest opinion to evaluate AlphaBurn for you.

Here’s the potential side effects from taking AlphaBurn:

We might seem like we’ve heavily criticized AlphaBurn in this review. But we are impressed by many things in AlphaBurn; we’re happy that MuscleSport have positively experimented to adding Dihydrocapsiate, which isn’t seen in many fat burner supplements.

However, as the big 275mg dosage of Caffeine Anhydrous can cause jitters to those with a low tolerance, we can’t recommend AlphaBurn to you.

While the majority of AlphaBurn’s ingredients are positive and it’s been formulated well for the most part, it’s the small mistakes that let AlphaBurn down against the highest rated fat burners on the market.