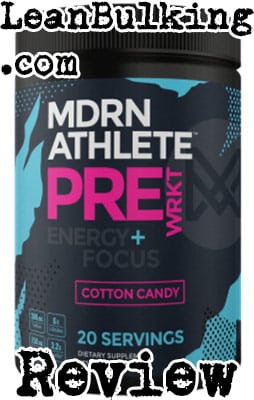 PreWRKT is a pre-workout supplement made by MDRN ATHLETE. It costs $43 for 20 servings, making it a premium priced product; this isn’t bad, but we’ll be checking whether there are effective ingredients in optimal dosage (to see if it’s worth the big price tag).

From first glance, we’re happy to see that PreWRKT doesn’t contain any proprietary blends. This means that you can see the exact dosages of each ingredient in this pre-workout supplement, which is exactly what you want.

Anyway, we’ll expand on PreWRKT’s ingredients as we analyze its nutrient profile in the next section. First, we’ll tell you more about the company behind it.

Who is MDRN ATHLETE?

MDRN ATHLETE is a supplements company based in the USA. We hadn’t heard of this brand before, but we do like that it donates 10% of their proceeds to charities.

Apart from that, it seems like PreWRKT is their first product on the market, so there’s not much else to say. Without wasting any more time, let’s see which ingredients have been added to MDRN ATHLETE’s first creation below…

PreWRKT contains 10 ingredients overall, which is just at the border of what we would consider the right amount; this is because we’ve seen many supplements containing over 10 nutrients that have been under-dosed.

But these concerns are quickly erased with PreWKRT after seeing that it contains an optimal dosage of L-Citrulline, which is one of our favorite ingredients found in pre-workout supplements.

It’s not all good news though. We can see that PreWKRT also contains Betaine, which can cause your breath & sweat to smell fishy. As well as Beta-Alanine, which is known for causing tingly & itchy skin.

We’ll explain everything in more detail as we take you through each ingredient in PreWKRT. By the end of this review, you’ll have a good idea of how safe and effective this pre-workout supplement really is. 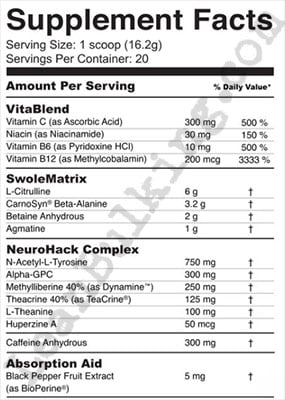 L-Citrulline is one of the best ingredients you can find in pre-workout supplements. This is because it’s proven to enhance your muscle pumps by increasing your nitric oxide levels (which increase your blood flow, allowing more blood and oxygen to enter your muscles).

You can’t really argue against it because most people know that it works. And it’s in an increasing number of pre-workout supplements for this reason.

MDRN ATHLETE has done well to dose this optimally too. So great start to PreWRKT here.

Beta-Alanine is quite a controversial ingredient, and we have mixed feelings about it here.

Why? Because it’s shown to improve your muscular endurance, but also cause a side effect known as paresthesia (itchy & tingly skin).

We’ll acknowledge that this isn’t a serious side effect that’ll cause long-term damage. It’s temporary and will fade away by the time your workout is finished, but we do find it very distracting while we’re trying to focus on making gains in the gym.

For this reason, we personally try to avoid Beta-Alanine when we can. But as we mentioned, we can see why many others enjoy taking this ingredient in pre-workout supplements.

Ultimately, we prefer Creatine Monohydrate; this is renowned for improving your muscular strength and endurance, without causing any side effects. So we do wish that MDRN ATHLETE had added this instead.

Betaine is the first ingredient that we see as a negative, in our honest opinion.

Why? Well, studies have shown that Betaine is capable of causing your breath and sweat to smell fishy (a side effect officially known as Trimethylaminuria).

If you don’t believe us, then you can refer to a clinical study that proves it here: https://www.ncbi.nlm.nih.gov/pmc/articles/PMC3848652/

Anyway, even more bad news is that we don’t believe Betaine Anhydrous to be reliable in offering benefits to improve your gym session either. For this reason, we personally try to avoid this ingredient in pre-workout supplements.

Agmatine Sulfate is derived from L-Arginine. But this isn’t good news, as L-Arginine is known for having a poor absorption rate when orally supplemented.

So what is Agmatine Sulfate supposed to do? Well, it’s believed to enhance your muscle pumps and cognition.

However, in our honest opinion, there simply isn’t enough evidence that prove it to work for Agmatine Sulfate to be a reliable addition to PreWRKT.

Not only that, Agmatine Sulfate isn’t even needed here, as PreWRKT already contains an optimal dosage of L-Citrulline, which is tried-and-tested to get the job done.

L-Tyrosine is a ‘brain booster’ nutrient that’s known to improve your cognition. However, as it doesn’t offer any other benefits that’ll take your training to the next level, we don’t consider it to be a necessary addition to pre-workout supplements.

That doesn’t mean it’s useless though; we believe L-Tyrosine to be a key player when added to nootropic supplements.

The bottom line is that Caffeine improves your focus enough to benefit your workout. So other cognitive boosting nutrients simply aren’t needed, in our honest opinion.

Alpha GPC is another ingredient that’s believed to enhance your cognition. But as we just mentioned, we don’t believe cognitive boosters to be necessary for pre-workout supplements such as PreWRKT.

Not only that, some websites think that Alpha-GPC can cause side effects including; diarrhea, headaches, fatigue, and nausea (which would ruin your gym session).

For this reason, we try to avoid Alpha-GPC when we can.

Also known as Methyliberine, this is a caffeine derivative (so it’s a stimulant). It’s a fairly new addition to supplements in general, first being seen in 2018 to our knowledge.

Basically, it’s supposed to be faster acting than Caffeine. But let’s be honest, Caffeine works pretty well and there’s no need to fix something that’s not broken, in our honest opinion.

There’s 250mg in PreWKRT, which is quite a big amount. And adding this to the Caffeine and Theacrine dosages in this pre-workout, we would consider the overall dosage of stimulants to be wayyy too much for most people.

As we just mentioned, Theacrine is another stimulant that’s been added to PreWRKT. Personally, we prefer pre-workouts without more than 1 stimulant contained, to keep us safe from jitters.

So in effect, we can only recommend PreWRKT to those that are extremely tolerant to stimulants (eg. drink more than 5-6 cups of coffee daily).

Huperzine A is a cognitive enhancer that increases your levels of acetylcholine (which increases your focus). It’s been dosed at the lower end of the scale here, but 50mg should still work.

But some websites do believe that Huperzine A is capable of causing side effects such as nausea, diarrhea, and cramping. So for this reason, we don’t consider it to be a key addition to any pre-workout supplement.

In case you’re wondering, ‘Anhydrous’ simply means that Caffeine has been dehydrated into powder form, so it can be added to supplements.

PreWRKT packs a HUGE 300mg dosage here, which might cause those that are sensitive to caffeine jittery side effects. In fact, we personally wouldn’t feel comfortable consuming this amount.

We prefer Caffeine Anhydrous dosages of under 200mg per serving; we’ve found that this is a safe dosage that will keep everyone safe while providing that ‘kick’ of energy you want in the gym.

For this reason, we don’t believe adding any more than 200mg Caffeine Anhydrous is necessary for pre-workout supplements. And don’t forget that PreWRKT contains 3 other stimulants that add to your risk of jitters (Theacrine and Dynamine).

You might be confused to see Black Pepper Extract here. But it’s more useful than just being used to sprinkle onto your food.

Basically, Black Pepper Extract contains high amounts of piperine; this is capable of improving your digestion and absorption rate of supplements it’s added to.

Therefore, while Black Pepper Extract is never going to be a key addition to any product, it’s certainly a useful ‘bonus’ to have. 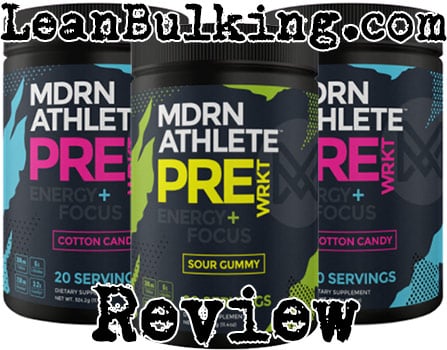 The main concern we have with PreWRKT is that it contains an overload of stimulants. It contains HUGE dosages of 3 different stimulants, which puts many people at risk that don’t regularly consume coffee on the regular.

Lesser risks of side effects include itching & tingling from Beta-Alanine, and nausea, diarrhea, cramping, headaches, and fatigue from Alpha-GPC and Huperzine A.

Here are the potential side effects of taking PreWKRT:

PreWRKT is clearly a respectable pre-workout that those with a very high tolerance to stimulants will really enjoy. But people that’re more sensitive to stimulants might be at risk of jittery side effects.

That being said, we’re impressed that MDRN ATHLETE has added a great dosage of L-Citrulline into PreWRKT; this will ensure that you experience great muscle pumps while lifting weights in the gym.

The overload of stimulants won’t be for everyone, and PreWRKT is missing some key nutrient such as Creatine Monohydrate.

For this reason, we don’t think it can compete with the highest rated pre-workouts on the market.