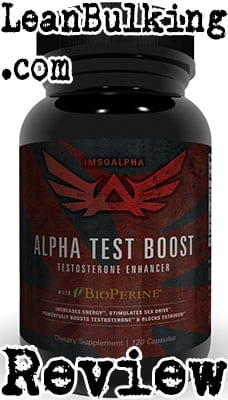 Alpha Test Boost is a testosterone booster by ImSoAlpha. It costs $62.95 for 30 serving containers, offering 4 capsule servings per day; this is the perfect number of daily capsules to keep your body fuelled in T-Boosting mode, so great job by ImSoAlpha here.

From first impressions, were happy to see that Alpha Test Boost contains D-Aspartic Acid, which is a key test boosting nutrient proven to work. However, were not as convinced by Bulbine Natalensis, among others.

Well expand on this as we analyze Alpha Test Boosts nutrient profile in the next section. But first, well tell you more about the company behind it.

ImSoAlpha is a USA-based supplements company founded by boxer and bodybuilder, Mike Rashid.

Were not sure how long this company has been around for, but were aware that Alpha Test Boost was released in early 2018. As ImSoAlpha is run by online bodybuilding sensation turned boxer, its only natural that the brand will gain popularity.

So were interested in seeing how safe and effective Alpha Test Boost is - and whether it can compete with the highest rated testosterone boosters on the market. So lets see which ingredients have been added below…

Alpha Test Boost contains 5 ingredients overall, which is a great number to have in a supplement; we always find that products containing over 10 are usually under-dosed, so well be keeping a close eye on Alpha Test Boosts dosages.

As we mentioned at the start of this review, our first impressions of Alpha Test Boost are positive. Were especially happy to see a key T-Boosting nutrient, D-Aspartic Acid has been included in an optimal dosage.

However, its not all good news. Were not fans of Tribulus Terrestris and Bulbine Natalensis is known to be quite an unreliable ingredient.

Anyway, well take you through each ingredient in Alpha Test Boost. By the end of this review, youll have a good idea of how safe and effective this testosterone booster really is. 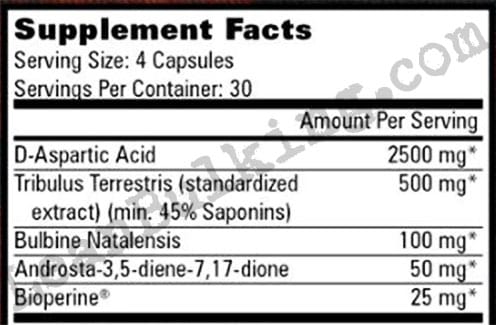 D-Aspartic Acid is something that we look for in every testosterone booster we analyze. This is because studies have shown that its able to raise your test levels when consumed in the right dosage (between 2,000mg-3,000mg).

But we will warn that consuming over 3,000mg per day has shown to be unreliable and potentially cause the opposite effect.

The good news is that Alpha Test Boost contains a clinical 2,500mg D-Aspartic Acid, which is an optimal dosage. So great start by ImSoAlpha here!

Tribulus Terrestris is definitely one of the better-known ingredients. Its been used for decades in Ayurveda (Traditional Indian Medicine) and has shown to potentially raise your libido.

However, the bad news is that studies show that Tribulus Terrestris isnt able to boost your testosterone levels.

Not only that, this herb has also shown to be capable of causing prostate enlargement in some studies. This is a side effect that could lead to serious male health issues, so we personally try to avoid this ingredient when looking for T-Booster supplements.

We would have much preferred to see something tried-and-tested (and safer) such as Fenugreek Seed Extract; this is another ayurvedic herb but has shown to be reliable in countless studies.

In case youre wondering, Bulbine Natalensis is a herb thats native to Africa (Southern and South East Africa). Its known to have been used in traditional medicine as a libido enhancer, which is why modern research has begun trying to determine its effectiveness at raising test levels in humans.

But as of this year, Bulbine Natalensis hasnt been proven to be 100% reliable; this is because there havent been enough studies to come to a conclusion, and there havent been any clinical human studies at all.

So simply put, all successful studies involving Bulbine Natalensis have been conducted on rats. Not only that, this herb has shown to potentially cause liver and kidney damage, which is the reason why we personally try to avoid it.

If youre interested in seeing the study suggesting that Bulbine Natalensis might cause liver and kidney damage, you can see it here: https://www.ncbi.nlm.nih.gov/pubmed/19735182

Another issue is that the studies involving rats show that a 150lb person would need 550mg Bulbine Natalensis for it to work anyway. And there is only a tiny 100mg dosage in Alpha Test Boost, so its not likely to work regardless.

So if you really are sold on Bulbine Natalensis, we would suggest looking for dosages upwards of 550mg. Personally, we believe that Vitamin D3 would have been a much better and reliable option in Alpha Test Boost (in our honest opinion).

You might be confused by the scientific, chemical name of this ingredient. But you might understand it easier once we tell you that its simply an anti-aromatase (aromatase inhibitor) thats been used to treat breast cancer in women.

So basically, Androsta-3, 5-diene-7, 17-dione has been added to try and stop you from suffering gynecomastia (man boobs). But the issue is that youll never be at risk from man boobs with any natural testosterone booster supplement.

For this reason, were not convinced that this nutrient is necessary in Alpha Test Boost. We would have much preferred to have seen something proven to raise T levels, such as Vitamin D3.

Bioperine is a patented form of Black Pepper Extract. Yes, the same stuff that you sprinkle onto your food to enhance its taste.

But its more useful than that; black pepper contains a molecule called piperine, which has shown to improve your digestion, as well as the absorption rates of supplements.

The slightly bad news is that Black Pepper Extract doesnt have any effect on testosterone levels. So while its a useful bonus addition to any product, itll never make or break a supplement. 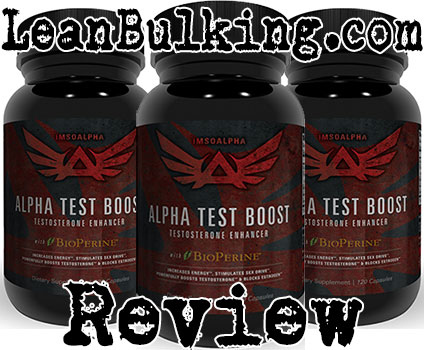 As weve mentioned in the ingredients section above, there are a few ingredients in Alpha Test Boost that can cause some trouble. So in case you skimmed past, well give you a quick summary below…

Basically, Tribulus Terrestris is suggested to potentially cause prostate enlargement, which is a side effect that should be avoided at all costs. Also, Bulbine Natalensis has shown to be capable of causing liver and kidney in a study, which is also worrying.

Here are the potential side effects of taking Alpha Test Boost:

After analyzing Alpha Test Boost, its clear to see that its a very respectable testosterone booster supplement. Our favorite things about it are that it contains D-Aspartic Acid, and ImSoAlpha hasnt stuck with conventional ingredients and gone for less known nutrients instead (such as Bulbine Natalensis).

Of course, adding lesser-known ingredients also comes with unreliability; nutrients that have been commonly used for longer are much more reliable, as theyve been tried-and-tested for years.

Our main concern with Alpha Test Boost is that 2 of its ingredients can potentially cause side effects (Tribulus Terrestris and Bulbine Natalensis). But again, well repeat that this is a respectable addition to the market.

While there are many good aspects of Alpha Test Boost, the fact it might cause side effects and is missing key T-Boosting nutrients mean that it cant compete with the highest rated test boosters on the market, in our honest opinion.