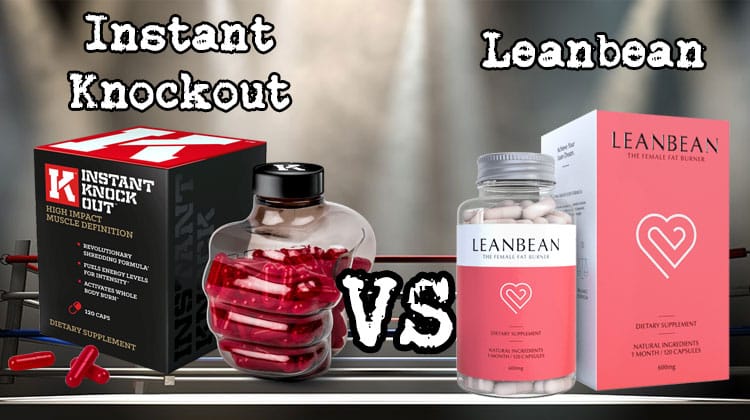 The interesting thing about these 2 fat burner supplements is that you can only buy both of them online. We weren’t too sure about what Leanbean was, but we’ve been assured by readers that it’s an up-coming female fat burner.

One thing to keep in mind, is that Instant Knockout isn’t gender-specific; this is good, as we haven’t seen one good ‘only for female’ supplement on the market yet…but this could change.

Anyway, we’ll be comparing both products side-by-side, to help you see which is the better fat burner for yourself. No lies, just honest facts comparing features and ingredients of both supplements.

Find out everything you need to know in this Instant Knockout vs Leanbean battle of the fat burners: 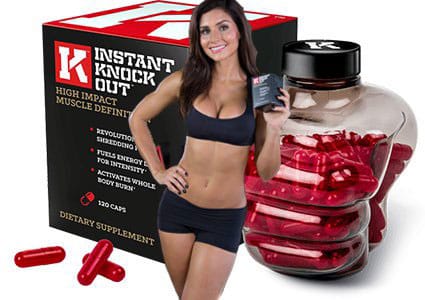 What Makes Instant Knockout Stand Out:

While Instant Knockout doesn’t contain any pink packaging, it’s backed by internally acclaimed fitness model, Alexia Clark (who’s also known as ‘The Queen of Workouts’). This was enough reason for us to try this fat burner – and we’re glad we tried it.

After only 2-3 weeks, we started seeing results; of course, we worked our booty-off in the gym and cut our calories too, but everyone knows this is still necessary when taking any fat burner supplement.

This makes Instant Knockout one of the fastest acting fat burners that we’ve ever tried. And it’s certainly the most effective that we’ve tried. But how does it work? 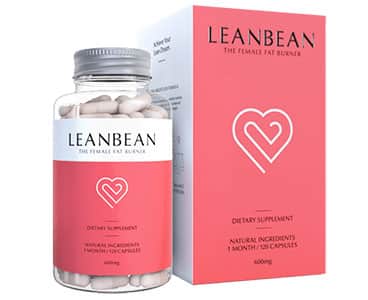 Leanbean is a very respectable fat burner, and it could even be one of the best we’ve seen.

However, we’ve given it a 3.5 rating because it’s a female-only fat burner; personally, we prefer fat burners that aren’t gender specific – because when was the last time green tea only benefited females, right?

Are ‘female only’ fat burners necessary?

The truth is, there’s no reason for most ‘female only’ products to be aimed only at women. The only positive for females we can think of with Leanbean, is that it doesn’t contain any stimulants, so there’s no risk of jitters.

However, you won’t be at risk from jitters with fat burners containing sensible dosages of Caffeine Anhydrous anyway. And in our honest opinion, a kick in energy levels is essential when cutting our carbs and lowering your calorie intake in order to lose fat.

Other issues we had with Leanbean include the under-dosed Glucomannan and Green Tea Extract in this fat burner; while Leanbean is priced to compete with other premium product, it doesn’t quite offer the same value for money, in our honest opinion.

Overall, Leanbean is a respectable fat burner but it’s missing that ‘wow’ factor

In fairness though, we really like how Leanbean has marketed this product, calling their bundles as ‘Bikini Body’ and really appealing to our desire of looking good on the beach.

It’ll only take a few improvements for this fat burner to be one of our favorites for women. And we’ll repeat that this is a very respectable product that deserves a spot on the market.

From looking at Instant Knockout vs Leanbean, it’s clear to see that both fat burners are very respectable and deserve a place on the market.

However, it’s clear to see why Instant Knockout is endorsed by countless people; from international fitness model, Alexia Clark to UFC legends such as Diego Sanchez. It’s the best fat burner on the market.

In fact, we’re pretty lucky that Instant Knockout was made available to the public. This fat burner was originally formulated for professional athletes and fitness models, so it’s no surprise that it works!

We’ve used Instant Knockout ourselves, here at Team LeanBulking.com, and we can confidently recommend this fat burner to all people. Regardless of whether you’re a high-level athlete or casual gym-goer.

Again, we’ll give our respects to the fallen Leanbean in this battle of the fat burners; it’s clearly a good product, but it simply can’t compete with the Instant Knockout.

Instant Knockout is the best natural fat burner on the market for: