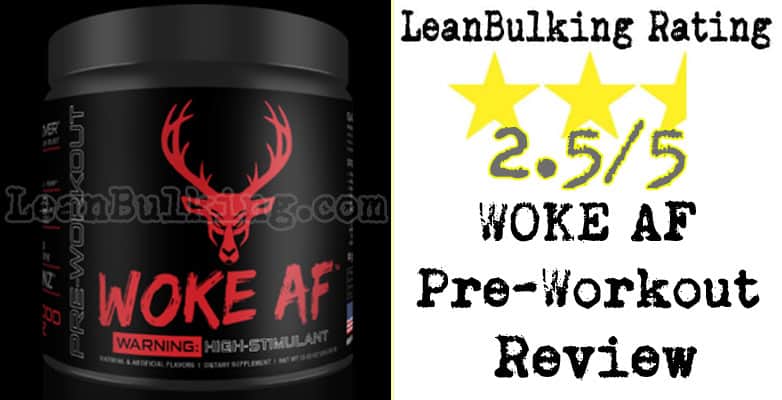 Woke AF is a pre-workout supplement made by DAS (Deer Antler Spray) Labs. It costs $54.95 for 30 serving containers and comes in a choice of 4 flavors; Blue Raz, Blood Raz, Grape, Rocket Pop.

A few years ago we would have said that the price of Woke AF makes it a premium product. But the price of the average supplement has increased so we dont actually think Woke AF is too bad (its certainly not cheap though).

Woke AF has become a popular pre-workout. So much so that its been discussed on Reddit a few times; although, the comments on Reddit claim that they didnt see any improvements while taking it…

Anyway, well analyze Woke AF pre-workouts nutrient profile in the next section. But first, well tell you more about the company behind it.

Who is DAS Labs

DAS Labs is a relevatively new supplement company compared to some of the brands that have been around for a few decades. Their products are sold in some of the biggest retailers such as GNC and Vitamin World, so theyre clearly popular with many lifters.

We personally havent tried too many of their products yet. But we liked the plain black and red container of Woke AF, and we were looking for new products; were always on the lookout to see if any pre-workouts can compete against the top rated pre-workouts on the market.

Anyway, lets see which ingredients have been added in the section below…

Woke AF pre-workout contains 10 ingredients overall, which is on the borderline of what we would consider as necessary; we often see products containing over 10 nutrients, with each individual one being under-dosed (and therefore ineffective).

However, this doesnt seem to be the case with Woke AF pre-workout. From first glance, were happy to see that some key pre-workout ingredients such as Citrulline Malate has been dosed optimally - which is more rare to see than you might think.

Well take you through each ingredient in Woke AF pre-workout, so you have a good idea of how safe and effective this pre-workout supplement really is.

Muscle pumps are something that everyone wants to experience in the gym. While you lift weights to tone up or make gains, theres simply no better feeling than when your muscles inflate during some biceps curls or squats.

Well, this is exactly what Citrulline Malate enhances; its proven to raise your nitric oxide levels, leading to more blood and oxygen being pumped into your muscles during exercise. This actually helps to reduce muscle damage and fatigue too.

Not only that, as we mentioned earlier, were very happy that DAS Labs have dosed Citrulline Malate optimally at 6,000mg here. Were actually surprised at how rare this is to see in pre-workouts, so great job by DAS labs here.

If theres one ingredient that divides lifters like the red sea, its Beta-Alanine.

Why? Because its shown to be beneficial but also causes a side effect. Basically, it enhances muscular endurance but causes itchy and tingly skin (a side effect called paresthesia).

Personally, we would prefer to avoid Beta-Alanine when possible for this reason. But dont worry, this side effect isnt life threatening or harmful - we just find it distracting during a gym session.

We believe that Caffeine Anhydrous is an essential addition to any pre-workout supplement. This is because its proven to raise your energy levels (and is the main reason why coffee and tea is so popular around the world).

But one thing you need to look out for is the dosage of Caffeine Anhydrous in pre-workouts; if you consume too much at once, youll suffer from jittery side effects.

As a general rule for ourselves, we would be worried about consuming more than 200mg Caffeine Anhydrous in 1 serving.

But this depends on how tolerant you are. For example, if you drink tons of coffee everyday (more than 5 cups per day), youll be able to handle bigger dosages. But if you dont drink too much coffee, then your tolerance will be lower.

So for people with a lower Caffeine tolerance, the 333mg dosage of Caffeine Anhydrous in Woke AF pre-workout might cause jittery side effects.

However, if youre buying a product called Woke AF, then were guessing youre wanting a big hit of Caffeine anyway. So while this wont be for everyone, its clear to see that DAS Labs have targeted the right people here - fair play to them.

Alpha GPC is mainly known for its ability to improve your cognition. This means that it might improve your mind-muscle-connection while lifting weights.

But we believe that its more useful in a nootropic supplement and isnt really necessary in a pre-workout; Caffeine Anhydrous offers enough of a boost to your focus to benefit your gym session.

Not only that, sites such as Web MD and Dr Oz have linked Alpha GPC with many side effects such as headaches, diarrhea, and nausea.

For this reason, we would rather avoid Alpha GPC when possible. But we can certainly respect DAS Labs intentions here.

Many people mistakenly believe that Taurine is able to boost your energy levels. But its important to know that its not a stimulant.

So what does it do? Well, Taurine is mainly used due to its ability to help prevent cramping.

So while its not a key ingredient in any supplement, we consider it to be a useful bonus addition in Woke AF pre-workout.

Were not going to sit here and pretend to know tons about Dendrobium - we dont. But we do know that it was found in the infamous pre-workout called Craze (which is now banned after causing harmful effects).

Basically Dendrobium is believed to be a stimulant. However, the only thing that we found this ingredient to be capable of is being an anti-inflammatory and promoting digestion.

For this reason, we dont believe that it was the magic ingredient that makes pre-workouts great. Instead, wel consider it to be more of a bonus addition here.

In case youre wondering, this is basically crushed up deer antler (into a powder so it can be added to supplements). Its believed to increase your testosterone levels and help increase muscle growth too.

However, we believe that this is more like how eating the heart of an animal makes you brave. Its mostly come from myth and its use in traditional Chinese medicine. And recent studies show that it doesnt reliably boost your T levels or promote muscle growth.

For this reason, we dont buy into the hype about Deer Antlet Velvet Extract here. We wish that this was replaced by something more useful such as Creatine Monohydrate in Woke AF pre-workout here.

Were always quite disappointed to see that Synephrine has been added to a supplement; this is because weve experienced bad side effects after consuming it.

However, we are aware that studies have shown that Synephrine is capable of promoting fat loss. So we wont claim that this ingredient doesnt work.

Ultimately, we cant get past the risk of side effects when consuming Synephrine (in our honest opinion). And a fat loss ingredient isnt even necessary in a pre-workout such as WOKE AF anyway.

As a result, we dont see the need for Synephrine here. If youre main aim is to lose body fat, then youll be much better off buying a specialized fat burner supplement.

If youre wondering what this is, its a patented ingredient thats shown to improve the absorption rate of supplements. This is therefore similar to Black Pepper Extract, which is why that is also seen in gym supplements too.

Anyway, we wont argue whether it works or not - there has been studies proving that it does. However, in our honest opinion, its never going to one of the most important additions to a supplement such as Woke AF pre-workout.

Saying that, its a great bonus addition here.

This is actually one of the first times weve seen Actagin in a supplement. But we do know that its believed to improve your recovery times and maximize muscle growth.

It sounds a bit too good to be true, and we havent seen enough studies proving that Actagin works yet. So in our honest opinion, we dont consider this to be reliable just yet - maybe we will in the future though, time will tell. 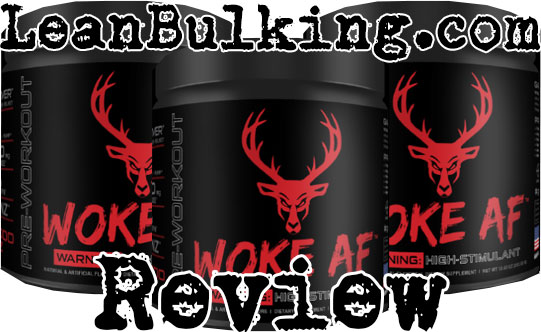 The main concern that we have with Woke AF pre-workout (in our honest opinion) is that it contains Synephrine; as mentioned, this has been linked with numerous side effects.

We will acknowledge that Woke AF pre-workout also contains a big 333mg dosage of Caffeine Anhydrous. This might cause those sensitive to stimulants jittery side effects. But you should be expecting a hard-hitting product after seeing its name - so only those that are very tolerant to Caffeine should consume this.

Finally, due to Woke AF pre-workout containing Beta-Alanine, youre at risk from suffering from itchy and tingly skin. In case youre wondering, this side effect is called paresthesia, and we dont enjoy suffering from this personally (although its not harmful).

Here are the potential side effects from taking Woke AF pre-workout:

For the most part, Woke AF pre-workout is another great addition to the supplements market. It contains some great ingredients, and we are particularly impressed that Citrulline Malate has been dosed optimally here.

DAS Labs have done a lot right with Woke AF; theyve chosen ingredients to improve your endurance, energy levels, and muscle pumps. However, its the ingredients that are capable of causing side effects (such as Synephrine and Alpha-GPC) that lets this product down in our honest opinion.

The optimal 6,000mg dosage of Citrulline Malate really Woke AF pre-workout stand out. However, we personally dont like that it contains nutrients such as Synephrine.

For this reason, we dont think it can compete with the highest rated pre-workouts available right now.