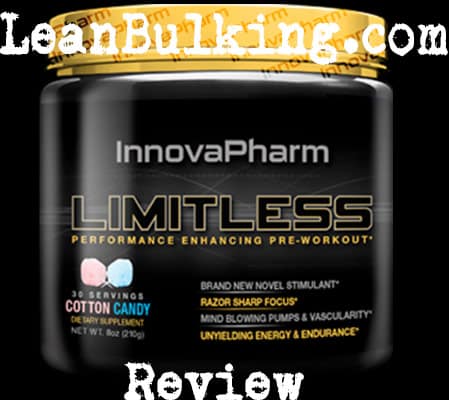 LIMITLESS is a pre-workout supplement made by InnovaPharm. It costs $49.99 for 30 serving containers, and comes in 4 flavors – Cotton Candy, Blue Raspberry, Strawberry Daiquiri, and Orange Tropical.

There’s nothing special about it’s appearance – most pre-workouts come in this generic container, so we’ll check out if LIMITLESS’ ingredients can shine in the next section.

InnovaPharm is a supplements company that claims to make customer satisfaction number one. We like this, as it’s better to know you’re dealing with a reliable company when buying products.

However, there wasn’t any info about when they were founded etc, so we wish their ‘About Us’ section was a bit more detailed.

Anyway, the most important feature of LIMITLESS Pre Workout are it’s ingredients – so let’s see what’s inside.

We have mixed feelings after looking at LIMITLESS’s ingredient list – it contains one of our favorite pre-workout ingredients (Citrulline Malate), but also has ingredients hidden in a proprietary blend.

Basically, a proprietary blend is a mixture of numerous ingredients that’re only shown to you as 1 quantity – this means you’ll never find out the exact dosage of individual ingredients inside.

As you can see from the ingredient list, the blend inside LIMITLESS is called ‘Limitless performance blend’ and has an overall quantity of 1.9g (1,900mg).

We’ll explain each ingredient inside this pre workout – so you can see how good LIMITLESS really is. 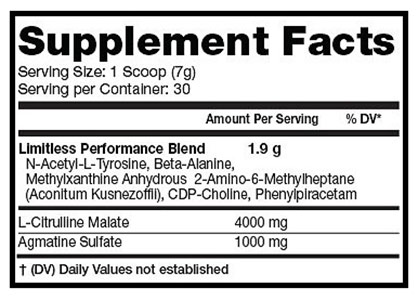 This is a ‘brain booster’ that’s shown to improve your focus. However, L-Tyrosine offers no other benefit to improve your gym session, so it’s better in a Nootropic supplement.

For this reason, we believe ingredients such as Caffeine and Rhodiola Rosea would’ve been a better choice here -but L-Tyrosine doesn’t cause any side effects, so there’s no negatvies to having it in LIMITLESS either.

Beta-Alanine is an interesting ingredient, as it’s both beneficial and can cause a side effect; basically, it’s shown to enhance muscular endurance, but causes paresthesia (see side effect section for more info).

This is found in the human body and other organisms, and is derived from stimulants such as Caffeine and Theobromine. As a result, it’s a mild stimulant itself, and can offer small energy boosts.

But there’s a problem: putting stimulants in a proprieatary blend isn;t a good idea, and Methylxanthine is part of the ‘Limitless Performance Blend’. As no-one knows the exact dosage of this stimulant in this blend, there’s a possibility it might cause jitters or energy crashes.

Not only that, Methylxanthine hasn’t been studied much – meaning it’s not proven to be safe or effective.

Also known as DMHA, this is a stimulant that’s believed to be the ideal replacement for the banned DMAA. It can offer the same benefits as Caffeine, but it’s not as reliable or safe (due to not being as extensively researched as Caffeine).

Not only that, it’s similar to DMAA, which means it could be just as harmful (DMAA was banned in numerous countries after causing harmful side effects, see more info in the section below).

CDP-Choline is another ‘brain booster’ that’s believed to improve focus. However, it doesn’t offer any other benefits to improve your gym session – so we think it’s better in Nootropic supplements.

Not only that, CDP-Choline’s only shown to work in dosages over 500mg per serving; as it’s inside a proprietary blend, no-one knows what dosage is inside LIMITLESS pre-workout (meaning no-one knows whether it’ll work here).

This is another ingredient that only boosts focus. As there’s already 2 ingredients in LIMITLESS that do this (CDP-Choline & L-Tyrosine), there’s simply no need for this in here.

Not only that, Phenylplacteram hasn’t even shown to be effective in healthy male or females. Bottom line is, we would’ve preferred to have an ingredient that boosted your strength or endurance instead (such as Creatine Monohydrate).

Citrulline Malate is actually the best ingredient in LIMITLESS pre-workout – it’s proven to enhance your muscle pumps in dosages of 6,000mg per serving.

But as you can see, there’s only 4,000mg in InnovaPharm’s pre workout (meaning it’s not likely to work). For this reason, we suggest checking for dosages of 6,000mg Citrulline Malate  or above in pre-workouts – to make sure you’re getting the most bang for your buck.

This is extracted from L-Arginine and is believed to help treat drug addiction and reduce pain. However, it’s not shown to deliver any benefits to improve your gym sessions.

For this reason, Agmatine is a useless ingredient in LIMITLESS pre-workout. 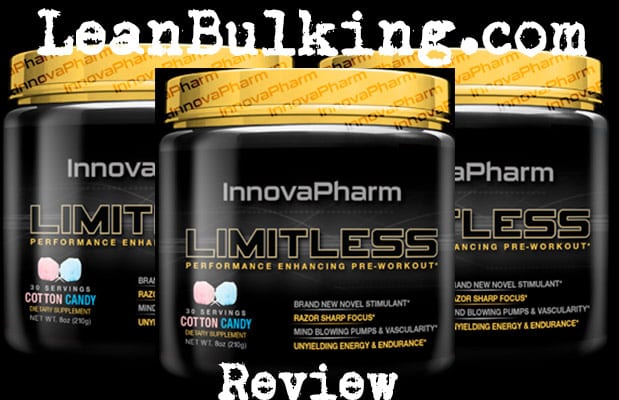 There are 2 ingredients that have shown to cause side effects in InnovaPharm’s LIMITLESS pre-workout – DMHA and Beta-Alanine.

However, as Beta-Alanine’s side effect isn’t harmful, some people don’t mind dealing with paresthesia to experience enhances muscular endurance – personally, we prefer pre-workouts containing Caffeine (in dosages under 200mg), as this can boost your endurance without causing any side effects.

Here’s the potential side effects from taking LIMITLESS:

Although Bradley Cooper’s film called ‘Limitless’ was bad, we believe it was better than InnovaPharm’s pre-workout. Basically, LIMITLESS doesn’t contain any key ingredients in optimal dosages – meaning it’s not the best pre-workout we’ve reviewed, or on the market.

Limitless contains both DMHA and Beta-Alanine which can cause side effects  – as well as missing key pre-workout ingredients such as Caffeine and Creatine Monohydrate.

For this reason, we believe you can get more bang for your buck with other pre-workouts available.