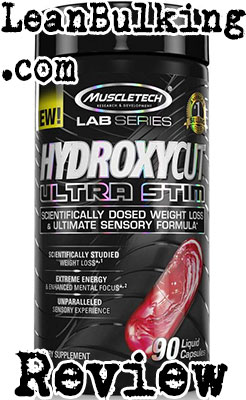 Hydroxycut Ultra Stim is a fat burner supplement made by MuscleTech. It costs $39.99 on their website for 45 serving containers, which seems to be good value for money.

However, we wish that Hydroxycut Ultra Stim offered 3-4 capsule servings per day; this has shown to be the best amount of servings spread throughout the day, but this fat burner only offers 2 capsules daily.

But for the most part, Hydroxycut Ultra Stim looks to be a great product that stands out from the crowd. We particularily like that theyve added Wakame (seaweed) Extract, as its believed to reduce visceral fat levels - well expand on this and more later on.

First, well tell those new to supplements more about the company behind Hydroxycut Ultra Stim.

MuscleTech are one of the giants in the supplements industry, and those whove been using products will no doubt be familiar with this company.

They built their reputation after producing some very well respected supplements; this is reflected especially in their Hydroxycut series of fat burners that Ultra Stim is part of.

Just to illustrate how big MuscleTech really are, they managed to sign Arnold Schwarzenegger to his own line of supplements at one point (although the Austrian Oak later cut ties with the company).

Anyway, youre here to learn more about Hydroxycut Ultra Stim. So lets see which ingredients are inside in the section below…

Hydroxycut Ultra Stim contains 7 main ingredients overall, which is a good number to have. This is because, from first-hand experience, we believe supplements containing over 10 nutrients are usually under-dosed.

But we have to point out that MuscleTechs fat burner contains a controversial ingredient, Yohimbe Bark Extract; this ingredient has been reported to cause many side effects from consumption in supplements in the past.

However, the good news is that most of the ingredients in Hydroxycut Ultra Stim are beneficial. Were especially happy to see that MuscleTech have added Caffeine Anhydrous and Green Coffee Bean Extract, which is a proven thermogenic that helps to promote fat loss.

Well explain this and more as we take you through each ingredient in this section. By the end of this review, youll have a good idea of how safe and effective this fat burner really is. 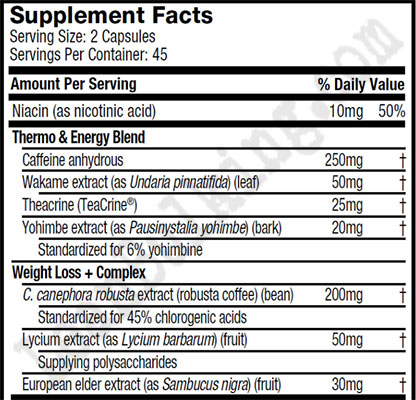 When it comes to raising your energy levels, Caffeine Anhydrous is your best and safest option; as its a pure, dehydrated form of Caffeine, you know exactly how much youre consuming.

Why is this important? Well, if youve ever consumed too much coffee before, youll know that large dosages of Caffeine can cause jittery side effects, which isnt something you want to suffer from.

For this reason, we always advise you to consume under 100mg Caffeine per capsule serving in fat burner supplements. This is a sensible dosage thatll keep you safe from potential jitters and energy crashes.

Now, the slightly bad news is that Hydroxycut Ultra Stim contains 125mg Caffeine per capsule. But as this isnt too much of an over-dose, we believe that those not sensitive to Caffeine will still be safe from jitters here.

As we mentioned before, were happy that MuscleTech have tried to be unique and add Wakame (seaweed) Extract into their fat burner supplement.

Its believed to promote visceral fat loss due to containing high amounts of fucoxanthin, and thought to help keep your blood sugar levels stable too. However, there hasnt been enough studies to prove that its reliable yet.

As a result, we prefer tried-and-tested nutrients such as Green Tea Extract for now, but well keep an eye on future studies on Wakame (seaweed) Extract.

In case youre wondering, Theacrine is a stimulant thats believed to raise your energy levels in a similar way to Caffeine.

But this isnt always a good thing; as we mentioned earlier, consuming large dosages of stimulants can result in jittery side effects.

Now, theres already over 100mg Caffeine per capsule serving in Hydroxycut Ultra Stim, so Theacrine further increases your risk of jitters and energy crashes - especially if youre sensitive to stimulants.

For this reason, we try to avoid fat burner supplements containing more than 1 source of stimulant.

Yohimbe Bark Extract is one of the ingredients that we personally try to avoid when choosing fat burner supplements.

Why? Because its been reported to cause numerous side effects such as nausea and anxiety.

Ultimately, there are safe and effective fat burning nutrients such as Green Tea Extract, so theres no need to risk your health by taking potentially harmful ingredients.

Basically, Green Coffee Bean Extract is a proven thermogenic thats able to boost your metabolism. Not only that, its shown to help keep your blood sugar levels stable too.

For this reason, we consider Green Coffee Bean Extract to be one of the best ingredients you can find in fat burner supplements.

Also known as Chinese Lycium Fruit or Lycium Barabarum, this is believed to improve your general health. But the problem is, not much is known about this ingredient at all.

As a result, its unknown whether Lycium Extract has any effect on fat loss or even works. Ultimately, we would have preferred something tried-and-tested such as Glucomannan Extract, which is proven to help suppress your appetite.

Similarly to Lycium Extract, not much is known about European Elder Extract either (also known simply as Elderberry). Its believed to be beneficial for your general health, but no study suggests that its able to help you lose body fat.

For this reason, we also prefer Green Tea Extract to this ingredient too. 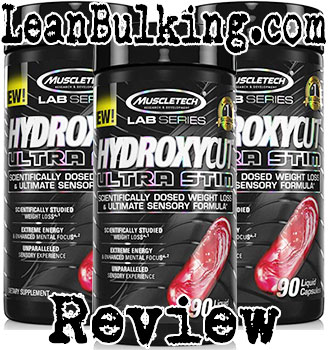 For the most part, Hydroxycut Ultra Stim is good fat burner supplement. However, we personally arent happy that it contains Yohimbe Bark Extract; this has been reported to cause numerous side effects in supplements.

Not only that, if youre sensitive to stimulants, then its important to know that Hydroxycut Ultra Stim contains 2 stimulants, which increases your risk of jittery side effects. But if you consume coffee regularily then you should be safe anyway.

Heres the potential side effects from taking Hydroxycut Ultra Stim:

Hydroxycut Ultra Stim is a respectable fat burner, which is no surprise since its made by one of the biggest supplement companies in the industry, MuscleTech.

However, while it contains some great ingredients such as Green Coffee Bean Extract, you cant ignore that it contains a potentially harmful nutrient (Yohimbe Bark Extract).

Still, we remain big fans of MuscleTech, and we rate another of their fat burners in our top 3 fat burners page out of the hundreds weve reviewed. Unfortunately, Hydroxycut Ultra Stim didnt make the cut though.

Hydroxycut Ultra Stim contains some great thermogenics such as Green Tea Extract. It even a unique nutrient (Wakame Extract).

However, the addition of Yohimbe Bark Extract and overload of stimulants means it cant compete with the best fat burners on the market.