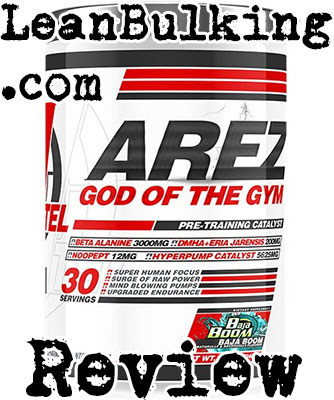 Arez is a pre-workout supplement made by NTel Pharma. It costs $39.95 for 30 serving containers, making it similarily priced to our highest rated pre-workouts on the market.

For the most part, we have good first impressions of this product; it contains some reliable nutrient such as Caffeine Anhydrous and L-Citrulline, with Beta-Alanine also being capable of improving your performance in the gym.

But in our honest opinion, there are some problems too, such as Beta-Alanine potentially causing itchy & tingly skin. Also, Arez Pre-Workout also contains some ingredients that we try to avoid, such as Synephrine and Rauwolfia Vomitoria Extract.

Well expand on all of that in the next section. But first, well tell you more about the company behind it.

Who are NTel Pharma?

This is the first time that weve come across this supplement company, so weve only taken what we learned from their website.

Basically, we couldnt find out the year this company were founded, but we liked that they mention that supplements arent miracle pills like other brands try to market their products to be. We respect that a lot.

However, youre here to learn more about Arez Pre-Workout, so lets see which ingredients are inside below…

In terms of ingredients, Arez Pre-Workout contains 13 overall; personally, we consider this to be too many for 1 supplement, as we usually find those containing more than 10 are under-dosed.

While this seems to be the case for many of the ingredients in Arez Pre-Workout, were happy to see nutrient such as Beta-Alanine have been dosed optimally.

But as we mentioned before, were concerned due to Arez Pre-Workout containing potentially harmful ingredients such as Synephrine and Rauwolfia Vomitoria Extract. Also, the 350mg Caffeine Anhydrous dosage per serving might cause jittery side effects to those sensitive to this stimulant.

Anyway, well tell more about this as we take you through each ingredient in this section. By the end of this review, youll have a good idea of how safe Arez Pre-Workout really is. 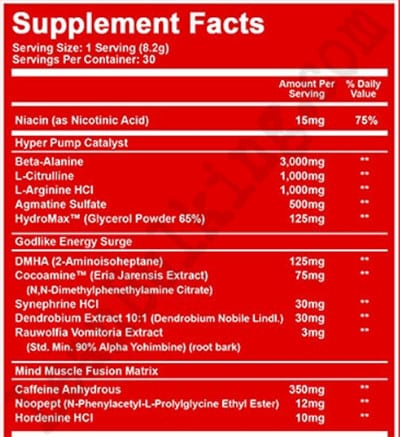 We always have mixed opinions about Beta-Alanine, as its both beneficial and can cause a side effect called paresthesia (itchy and tingly skin).

So how does it benefit you? Well, studies have shown that Beta-Alanine is capable of improving your muscular endurance in the gym.

Personally, we find its side effect very distracting when trying to focus on our gym session. But if youre not as badly affected by tingly and itchy skin, Beta-Alanine can be a great addition to any pre-workout.

For this reason, well leave this up to personal preference whether Beta-Alanine in Arez Pre-Workout is a good or bad thing.

L-Citrulline has increasingly been added to pre-workout supplements for good reason; its able to raise your nitric oxide levels, leading you to benefit from enhanced muscle pumps in the gym.

What does this do? Well, muscle pumps not only make you feel and look better while pumping iron, but it also reduces muscular damage and fatigue too.

But the bad news is that Arez Pre-Workout doesnt contain an optimal dosage of L-Citrulline; studies have shown that dosage upwards of 1.5g L-Citrulline is needed to actually work.

As this supplement only contains 1,000mg per serving, L-Citrulline isnt guaranteed to deliver its benefit here.

For the best results, we recommend looking for pre-workouts containing Citrulline Malate (which is L-Citrulline bound with Malic Acid to help raise your ATP levels too, in a similar way to how Creatine Monohydrate works).

Were not sure why NTel Pharma has added L-Arginine alongside L-Citrulline; L-Arginine has shown to have a poor absorption rate when orally supplemented, so L-Citrulline or Citrulline Malate are much better options.

Simply put, we would have preferred NTel Pharma to have simply increased the dosage of L-Citrulline in Arez Pre-Workout, rather than add L-Arginine here.

For this reason, we would have also preferred NTel Pharma to have left this out of Arez Pre-Workout too, and increased the dosage of L-Citrulline instead.

HydroMax is a patented form of Glycerol, which is believed to help keep your hydrated and therefore improve sporting performance.

As a result, this is more of a bonus addition to Arez Pre-Workout instead of being a key addition (you should always consume 2-3 liters of water per day to stay hydrated anyway).

DMHA is a very controversial ingredient in the competitive sporting world. This is because DMHA is banned from most competitive sports, with soccer players being suspended from playing in the premier league because of it.

In fairness, DMHA has shown promising signs of being able to promote fat loss. But if youre main aim is to lose body fat, then you should be considering fat burner supplements instead.

Just in case youre a competitive high-level athlete, you should always check whether DMHA is allowed in your sport before consuming it (or risk being suspended from playing professionally).

Due to pre-workouts containing DMHA cutting out some people, we dont believe it should be added to pre-workouts which are widely used by many. Instead, we would have preferred a legal, tried-and-tested nutrient such as Creatine Monohydrate.

Not much is known about Eria Jarensis as its not been researched as much as other ingredients. But from what we know, Eria Jarensis is believed to improve your cognition (therefore its probably more useful in a nootropic supplement).

Now, were not saying Eria Jarensis isnt useful in Arez Pre-Workout; an increase in focus can help strengthen your mind-muscle-connection in the gym, but the problem is that we cant confirm whether its reliable at delivering its benefit.

Not only that, personally, we believe that Caffeine Anhydrous improves your focus enough for the purposes of a pre-workout supplement. So we dont consider Eria Jarensis to be a necessary addition to Arez Pre-Workout here.

In our honest opinion, Synephrine is the worst addition to this Erez Pre-Workout; its main function is promoting fat loss, so its not even necessary in pre-workout supplements.

Again, well repeat that fat burner supplements are more beneficial if your main aim is to lose body fat.

But heres the worst part; Synephrine has been reported to cause numerous side effects after being consumed in supplements.

For these reasons, we would have preferred it if NTel Pharma didnt include Synephrine in Erez Pre-Workout. A safe and effective nutrient such as Creatine Monohydrate would have been a much better addition instead, in our opinion.

Dendrobium is a type of plant thats been used in traditional medicine in East Asia. Its believed to contain Phenylethylamine, which would boost your energy levels due to being a stimulant.

However, the bad news is that experts dont believe that Dandrobium Extract actually contains Phenylethylamine. Now, its hard to know for certain, as there hasnt been enough research conducted on Dandrobium Extract, so we consider it to be unreliable.

As a result, Rauwolfia Vomitoria Extract is another ingredient that we try to avoid when choosing pre-workout supplements.

So whats a sensible dosage? We personally choose pre-workouts containing under 200mg Caffeine Anhydrous per serving, to avoid risks of side effects.

However, Arez Pre-Workout contains a HUGE 350mg per serving, meaning those sensitive to this stimulant will be at risk from jitters and energy crashes. But saying that, those that regularly consume coffee will be safe.

Noopept is a patented form of N-phenylacetyl-L-prolylglycine Ethyl Ester; this is a chemical thats believed to improve your cognition.

As a result, we would also suggest that Noopept is more beneficial in Nootropic supplements instead of pre-workouts. Again, we would have preferred NTel Pharma to have added Creatine Monohydrate instead here.

Hordenine is another stimulant thats believed to promote fat loss. Now, well repeat that you should look for fat burner supplements if youre main aim is to lose body fat, so we dont consider Hordenine a necessary addition to Arez Pre-Workout.

Not only that, Hordenine has also shown to potentially cause side effects (which well expand on in the next section below). 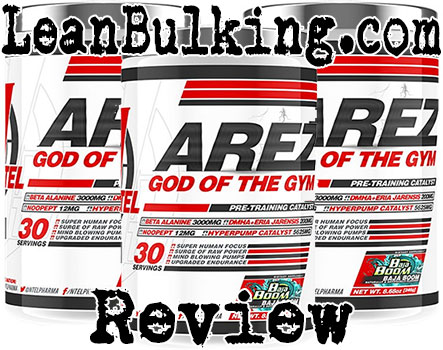 While NTel Pharmas Arez Pre-Workout is a respectable supplement, it does contain ingredients able to cause side effects (in our honest opinion).

As weve already mentioned, the main risks are due to Arez Pre-Workout containing Synephrine, Rauwolfia Vomitoria Extract and Hordenine. But those sensitive to stimulants might also suffer from jittery side effects due to the huge 350mg Caffeine Anhydrous per serving in Arez Pre-Workout.

Heres the potential side effects from taking Arez Pre-Workout:

Arez Pre-Workout is a very respectable pre-workout for the most part. It contains some great ingredients such Caffeine Anhydrous and L-Citrulline, as well as an optimal dosage of Beta-Alanine.

However, we believe that Arez Pre-Workout is lacking a few key nutrient such as Creatine Monohydrate. And we would have preferred this supplement to not contain the likes of Synephrine, Rauwolfia Vomitoria Extract and Hordenine too.

We dont believe Arez Pre-Workout is capable of competing with the highest rated pre-workouts available, but its still has its place on the market.