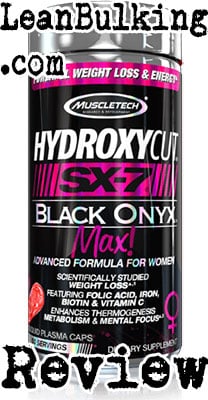 Hydroxycut SX-7 Black Oynx MAX is another addition to MuscleTechs highly rated Hydroxycut series of fat burners. But if you havent already noticed, this fat burner is specifically targeted at females.

Is this a good thing? In our opinion, theres not many reasons to create supplements specifically for any gender. And it seems MuscleTech have aimed Hydroxycut SX-7 Black Oynx MAX at women by adding some pink to its packaging, in our honest opinion..

Apart from that, we necessarily see any ingredients that are more beneficial for women. However, saying that, we do like that there is a sensible dosage of Caffeine Anhydrous per capsule serving of Hydroxycut SX-7 Black Oynx MAX.

In terms of serving sizes, MuscleTech have provided you with 2 capsule servings per day; we personally prefer 3-4 capsules spread throughout the day, as this has shown to keep your body fuelled in fat burning mode for longer.

Anyway, well analyze Hydroxycut SX-7 Black Oynx MAXs nutrient profile for you in the next section. But first, well tell you more about the company behind it.

If you know about supplements, then you would have heard about MuscleTech. Theyre giants in the industry and have built a great reputation for themselves.

They sponsor many athletes such as Abel Albonetti and Lauren Abraham who are both fitness models. But youre here to learn more about Hydroxycut SX-7 Black Oynx MAX. so lets see which ingredients are inside below…

Hydroxycut SX-7 Black Onyx contains 7 main ingredients overall, which is a good number to have; we usually find that supplements containing more than 10 are under-dosed.

From first glance, this seems like a respectable fat burner. No ingredients are hidden in any proprietary blends, so you can see the exact dosages of each ingredient, which is great.

Were also glad to see that MuscleTech have added some great thermogenic ingredients such as Green Coffee Bean. Overall, this remains a respectable fat burner that has a place on the market.

However, in our honest opinion, there are a few things that could have improved Hydroxycut SX-7 Black Oynx MAX; we would have liked to have seen an appetite suppressant added to this fat burner, as well as other key nurients such as Green Tea Extract.

Anyway, well explain this and more as we take you through each ingredient. By the end of this review, youll have a good idea of how safe and effective Hydroxycut SX-7 Black Oynx MAX really is. 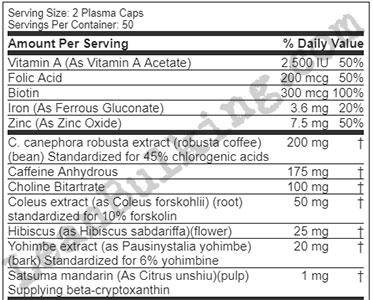 As weve already mentioned, Green Coffee Bean Extract is a tried-and-tested nutrient thats shown to work in studies. Its known as a thermogenic due to containing high amounts of chlorogenic acid (which is able to boost your metabolism).

Caffeine Anhydrous is the best stimulant you can find in supplements. Its the pure form of caffeine in dehydrated powder form, which helps you keep an eye on your intake.

So as you know, after consuming too much coffee, youll experience jittery side effects. Well, the exact same thing happens when you consume too much Caffeine Anhydrous in supplements.

So whats a good dosage? We advise that you consume under 100mg Caffeine Ayhydrous per capsule serving, which will keep even those with a slightly low tolerance to caffeine safe from side effects.

The good news is that MuscleTech have under 100mg Caffeine Anhrous per capsule serving. Good job by MuscleTech here too.

In our honest opinion, this is the first ingredient that we dont completely agree with in Hydroxycut SX-7 Black Oynx MAX.

Why? Because Choline has shown to cause your breath and sweat to smell fishy. You can learn more about Fish Odor Syndrome here: https://www.ncbi.nlm.nih.gov/pmc/articles/PMC3848652/.

Not only that, there arent many studies that prove that Choline Bitartrate can be effective at promoting fat loss. As a result, we dont consider this to be the most reliable ingredient in Hydroxycut SX-7 Black Oynx MAX.

Ultimately, we would have much preferred something more tried-and-tested such as Green Tea Extract.

Coleus Forskohlii Extract is an interesting ingredient, as its a fairly new discovery in terms of the supplements industry.

Basically, its believed that Coleus Forskohlii Extract can help you burn fat while having a positive effect on your testosterone levels. Now, we dont think theres enough evidence to prove that its capable of delivering these benefits.

For now, its a very promising ingredient. But its still unreliable in our honest opinion.

We mentioned at the start that many companies add pink on the packaging and some girly ingredients to try and sell to females (in our honest opinion). Well, Hibiscus is a type of flower, as you might know.

It has shown promising signs of lowering your cholesterol levels and boost your immune system. But we dont believe that its going to make a difference to your fat burning goals.

When choosing a fat burner, one thing we personally try to do is avoid ingredients such as Yohimbe Bark Extract. This is because this nutrient has the potential to cause numerous side effects.

In fact, its not considered as 100% safe by the US Department of Health and Human Services. You can see more about this on their page here: https://nccih.nih.gov/health/yohimbe.

Ultimately, theres no need to consume potentially harmful ingredients when choosing a fat burner supplement. Especially when there are safe and effective nutrients such as Green Tea Extract available.

Satsuma Mandarins are one of our favorite fruits; its seriously tasty and is packed with Vitamin C.

But when it comes to fat burning, its not the best addition to Hydroxycut SX-7 Black Oynx MAX. In fact, this is the first time weve seen Satsuma Mandarin being added into any supplement, and after doing some further research, it doesnt seem to be very effective here, in our honest opinion. 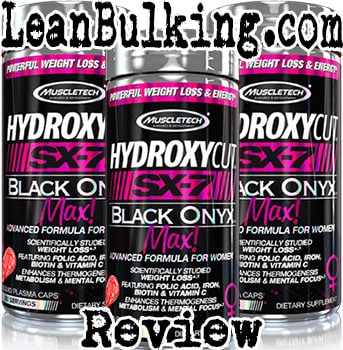 For the most part, Hydroxycut SX-7 Black Oynx MAX is a very safe fat burner supplement. It contains mostly great ingredients, with the exception of a few unreliable ones (in our honest opinion).

But one ingredient that we personally would rather avoid is Yohimbe Bark Extract; while this has shown to slightly help you lose body fat, its also been reported to cause numerous side effects.

As we mentioned before, theres simply no point in risking side effects when there are safe and effective nutrients available.

MuscleTech have created another respectable fat burner that definitely has its place in the market. It contains some great, effective nutrients such as Green Coffee Bean Extract.

We also like that MuscleTech have added a new ingredient (Coleus Forskohlii); this has the potential to be a great ingredient in the future when further research is conducted, but for now it remains unreliable, in our honest opinion.

While we think that Hydroxycut SX-7 Black Oynx MAX is better than many fat burners on the market, it does have some flaws. We dont like that MuscleTech have added the controversial Yohimbe Bark Extract, which is seen in more fat burners than you might think.

Hydroxycut SX-7 Black Oynx MAX is a great fat burner for the most part.

We like that MuscleTech havent added Raspberry Ketones, which is seen in many other fat burners aimed at women.

But as it contains Yohimbe, we dont think it can compete with the highest rated fat burner on the market that come at a much lower price.