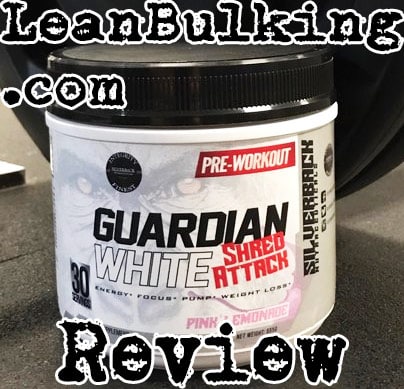 Guardian White Shred Attack is a pre-workout supplement made by Silverback Nutraceuticals. It costs $59.99 for 30 servings, and comes in 1 flavor – Pink Lemonade.

Personally, we don’t mind that it’s not available in more flavor options. But what we do care about are which ingredients have been added inside Guardian White Shred Attack.

We’ll analyze Guardian White Shred Attack’s nutrient profile in the next section. First, though, we’ll tell you more about the company behind it.

Who are Silverback Nutraceuticals?

Silverback Nutraceuticals had a very plain website, which we don’t mind; you can see that our website is also quite plain and straight-talking.

However, after clicking on the ‘about us’ section of Silverback Nutraceuticals website, we couldn’t read the text very well because of the bright background.

Not only that, we didn’t learn what year this company was founded etc. So improvements could definitely be made there – but what really matters are whether the ingredients inside Guardian White Shred Attack are safe and effective…

In total, Guardian White Shred Attack contains 16 main ingredients that we’ll be analyzing for you in this review. We consider this to be too many nutrients, as we usually find that supplements containing over 10 ingredients are under-dosed to fit the budget.

However, in all fairness, while Silverback Nutraceuticals has added too many ingredients, it seems like they’ve dosed them well; from first glance, we’re happy that Citrulline Malate has been dosed optimally.

Anyway, we’ll expand on this as we take you through each ingredient inside Guardian White Shred Attack. By the end of this review, you’ll know how safe and effective this pre-workout really is.

How does it work? Well, it’s able to raise your nitric oxide levels, which directly improves your blood flow. In turn, this allows more blood and oxygen into your muscles to ‘pump’ them up.

Not only that, as more blood is filling your muscles, your muscular endurance is also improved too.

Beta-Alanine is a controversial ingredient, as it’s shown to enhance your muscular endurance. But it’s also known for causing itchy and tingly skin (a side effect officially known as ‘paresthesia’).

We’ll leave this up to personal preference, as some people don’t mind suffering from paresthesia too much. However, we find it very distracting when trying to focus on lifting weights in the gym.

Ultimately, we prefer Creatine Monohydrate; this offers the same benefit, without causing any side effects.

Taurine is more of a ‘bonus’ addition to a pre-workout rather than a key one; it’s shown to help prevent cramping while working out, but doesn’t really offer any other benefits.

As you can gain the same advantage by simply keeping yourself hydrated, Taurine isn’t completely necessary. But there’s certainly no negatives to having it in Guardian White Shred Attack either.

We’ve grouped Betaine and Choline together, as they both cause the same side effect; these 2 ingredients are known for causing your breath and sweat to smell fishy in the gym.

But the worst part is that Betaine and Choline haven’t actually proven to deliver any benefits to improve your workout.

For this reason, we consider both of these nutrients to be unnecessary in Guardian White Shred Attack.

L-Carnitine is a key addition to any pre-workout, as it’s proven to reduce muscular fatigue and damage, while being able to improve your focus too.

Silverback Nutraceuticals has also dosed L-Carnitine very well; studies show that you need at least 500mg per serving for it to work.

In case you’re wondering, ALCAR is another form of L-Carnitine (Acetyl-L-Carnitine), and offers almost the same benefits. The only difference is that ALCAR is known for slightly promoting fat loss.

Agmatine Sulfate is basically a compound extracted from L-Arginine. However, this isn’t a good thing, as L-Arginine has a poor absorption rate so it’s not very effective when orally consumed through supplements.

Basically, Agmatine Sulfate has the same issue. Not only that, it’s not really needed as Silverback Nutraceuticals has already added an optimal dosage of Citrulline Malate, which is proven to enhance your muscle pumps.

Ultimately, the good news is that Agmatine Sulfate hasn’t shown to cause any side effects.

One of the worst things about Guardian White Shred Attack is that it contains an overload of stimulants – a HUGE 350mg dosage of Caffeine, along with Dicaffeine Malate, Theobromine and Hordenine.

For this reason, Guardian White Shred Attack is almost certain to cause jittery side effects. Especially to those that are sensitive to stimulants.

There’s simply for companies to add more than 1 stimulant into their pre-workouts; this is what gave these supplements a bad reputation in the first place, and Caffeine Anhydrous is enough to give you that ‘kick’ of energy in the gym.

Ultimately, we advise you to choose pre-workouts containing less than 200mg Caffeine Anhydrous per serving – to stays safe.

We’ve grouped together the worst ingredients into this section, to save time and you from being bored (as this review is starting to get quite long…)

Anyway, the nutrients that are potentially harmful in Guardian White Shred Attack include; Synephrine, Hordenine and Huperzine A.

However, as you can see, there are many nutrients that can cause side effects here, which isn’t what you want.

Just to expand on this, it’s important to know that Synephrine has been banned in certain countries (including UK & Canada), after being commonly reported to cause numerous side effects.

For these reasons, we recommend you to avoid all the potentially harmful ingredients on your search for the best pre-workout – especially Synephrine. 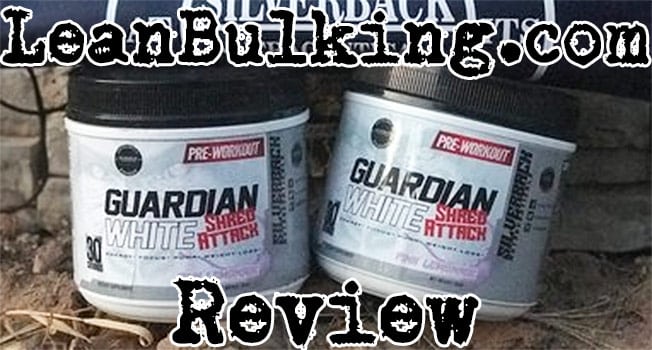 In terms of side effects, there are a few ingredients in Guardian White Shred Attack that can cause side effects; these include Synephrine, Hordenine, Huperzine A, as well as the overload of stimulants.

As we’ve already mentioned, Synephrine has been banned from a few countries after causing numerous side effects. For this reason, we advise you to avoid all the ingredients listed when you can.

Not only that, try to consume under 200mg Caffeine per serving in pre-workouts, to avoid jittery side effects.

Guardian White Shred Attack is actually one of the few products that contains good dosages of ingredients while having more than 10 nutrients overall.

However, after looking deeper into Guardian White Shred Attack’s nutrient profile, you can see that it the potential to cause numerous side effects; the overload of stimulants is almost certain to cause jittery side effects, while it also contains Synephrine which is known for being harmful.

However, we simply can’t recommend this supplement, as it’s likely to cause side effects.