See Your Best Options In Our
– Top 3 Testosterone Boosters Page –

Testovarin is a testosterone booster made by Biogenix. It’s very popular in Europe, priced at the equivalent of around $30 per container, which is a very reasonable price.

From first glance, we’re quite worried about Testovarin; the only effective nutrient at raising your T levels seems to be Stinging Nettle Extract, and even can be unreliable.

Ultimately, we’re always disappointed to see that companies haven’t added Vitamin D3 to their test booster supplement. Vitamin D3 is the best ingredient to add to T-Boosters, as well as being very beneficial to your general health too.

Anyway, we’ll analyze Testovarin’s nutrient profile for you in the next section. But first, we’ll tell you more about the company behind it.

Founded in 2004, Biogenix have become a well established company in Europe.

Interestingly, they use Olimp supplements’ laboratories to create their own products; it’s not clearly stated, but we believe that Biogenix is a brand owned by Olimp.

Looking at their sponsored athletes list, you can see that they’re mostly Polish. And as their supplements are mainly sold through Polish online retailers, we believe that Biogenix are based in Poland.

Anyway, the most important thing is whether Testovarin contains safe and effective ingredients. Let’s find out below…

Testovarin contains 6 main ingredients, which is a good number of nutrients to have in 1 supplement; we find that products containing over 10 ingredients are usually over-dosed.

From first glance, we’re also happy to see that Testovarin doesn’t contain any proprietary blends, so you can see the exact dosages of each ingredient inside this testosterone booster supplement.

However, the problem is that there aren’t any key testosterone boosting nutrients in Testovarin; the only ingredient capable of making a positive impact on your T levels is Stinging Nettle Root Extract.

We’ll take you through each ingredient in Testovarin. By the end of this review, you’ll know how safe and effective this test booster really is. 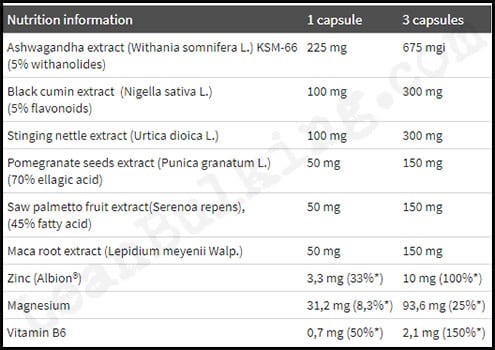 In terms of raising your testosterone levels, Ashwagandha isn’t a good ingredient at all; it hasn’t shown to raise your T in any study conducted.

However, Ashwagandha is able to increase your power output, which is useful in other supplements such as a pre-workout.

Even so, we still consider Ashwagandha to be a useful bonus in Testovarin here, even if it doesn’t raise your testosterone levels.

Also known as Nigella Sativa Extract, this is a spice that’s been used for medicinal purposes for quite a long time.

However, while Black Cumin Extract is believed to benefit your general health, it’s not shown to have any effect on your testosterone levels.

Ultimately, when buying a test booster supplement, the main thing you want is a raise in T levels. For this reason, we consider Black Cumin Extract to be an unnecessary addition to Testovarin here.

Stinging Nettle Extract is the only nutrient in Testovarin that’s shown to have any effect on your testosterone levels; there’s been many studies proving that it works, but we’ll acknowledge that there have been some unsuccessful studies too.

For this reason, while we do consider Stinging Nettle Extract to be effective, it’s not the most reliable choice to add to a test booster supplement.

We would have preferred a more proven nutrient such as Vitamin D3, but as we mentioned, Stinging Nettle Extract is still the best ingredient in Testovarin at raising your T levels.

The main benefit of this ingredient, is that it tastes good…we’re being serious.

Alright, so they’re also quite low calorie so its a good addition to a diet too. But the important thing to know, is that Pomegranate Seeds Extract has no effect on your testosterone levels.

The reason why this is added into test boosters, is because it possesses fatty acids that are believed to raise your testosterone levels.

However, modern research has shown that Saw Palmetto Extract has no effect on your T levels at all.

The only potential benefit that Saw Palmetto Extract could deliver, is that it might suppress prostate growth. But this isn’t necessary for most men, and it’s better to consult a doctor if you’re worried about your prostate health anyway.

We believe Maca Root Extract to be the second best nutrient in Testovarin; it’s a vegetable that is similar in appearance to a turnip, and has been used as an aphrodisiac in the past.

It has no effect on your testosterone levels. But at least it delivers a useful benefit – an increase in libido.

Now, a raise in T levels will naturally raise your libido, but being honest, Testovarin doesn’t seem likely to deliver this benefit. For this reason, Maca Root Extract isn’t bad here.

But it goes without saying, that we would have preferred Biogenix to have added tried-and-trusted ingredients that are proven to raise your testosterone levels instead.

Although Testovarin doesn’t seem to be very effective at raising your testosterone levels, none of its ingredients are likely to cause any side effects either.

We’re glad that Biogenix didn’t add Tribulus Terrestris to Testovarin; this is a mistake that many companies make, as it can cause prostate enlargement, and doens’t have any effect on your T levels.

So credit where credit is due – Testovarin isn’t going to cause any unwanted side effects.

We probably seem like we’ve been very critical of Testovarin in this review. But we call a spade a spade – we give you the stone-cold truth without any BS.

Anyway, now that you know the bad points about Testovarin, we’ll give a quick summary of the positives, to prevent some people leaving with a sour taste in their mouths and giving us negative comments; Testovarin doesn’t have any proprietary blends, which is great so you can see the exact dosages of ingredients inside. Also, it’s not likely to cause any side effects either, which gets the thumbs up too.

However, you can’t ignore the fact that the only nutrient that might have a positive effect on your testosterone levels is Stinging Nettle Extract.

Testovarin isn’t the most expensive product we’ve reviewed, but you can see where Biogenix have cut the costs here.

They only added 1 ingredient likely to raise your T levels, so we advise you to look elsewhere for a more effective T-Booster (containing an optimal 5,000IU dosage of Vitamin D3).