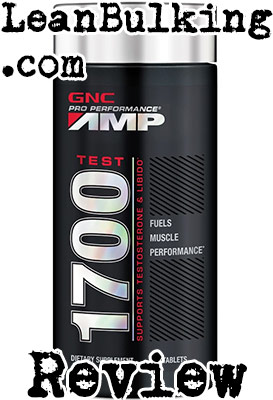 TEST 1700 is a testosterone booster supplement made by GNCs own label, Pro Performance AMP. Its priced to compete with the premium products on the market at $89.99, with a serving size of 4 capsules per day.

Now, were happy that it offers the optimal serving size for a test booster, so this is a great start. And we can also see that it contains a key nutrient, Fenugreek.

However, the bad thing we can see from first glance, is that TEST 1700 contains Tribulus Terrestris, which studies have shown can increase the weight of your prostate.

Anyway, well expand on this and more in the next section, where well analyze TEST 1700s nutrient profile. But first, well tell you more about the company behind it.

Who are GNC Pro Performance AMP?

If youve had previous experience with supplements before, then theres a high chance youll already know about this label; GNC is a massive outlet for supplements, and this is their own brand that theyve created.

However, we can see that they price their own products very highly. In fact, TEST 1700 is actually more expensive than the highest rated test boosters on the market!

So were expecting very big things from this product. Lets take a look at which ingredients are inside, to see how safe and effective it is…

In total, TEST 1700 contains 12 main ingredients, which we believe is too much; supplements containing over 10 nutrients are usually under-dosed, so we prefer seeing under this amount in supplements.

And this seems to be the case with TEST 1700; GNC Pro Performance AMP seem to have decided to add lower amounts of numerous, less effective ingredients, rather than add optimal dosages of key nutrients such as Vitamin D3.

Anyway, youll learn all of this as we take you through the most important ingredients inside TEST 1700. By the end of this review, youll know how safe and effective this testosterone booster really is. 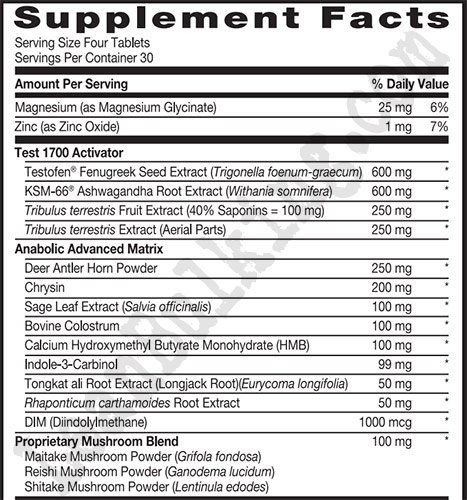 Starting with the best ingredient in TEST 1700. Fenugreek Seed Extract is a key addition to any T-Booster, as its proven to raise your sex drive and testosterone levels in numerous studies.

However, the same studies also show that Fenugreek Seed Extract works in dosages as low as 50mg per serving; this means its unnecessary for companies to add over 100-200mg per serving.

Now, GNC Pro Performance AMP has decided to add a HUGE 600mg dosage of Fenugreek Seed Extract. But in fairness, the most important thing here, is that this ingredient will work.

Ashwagandha Root Extract has been used in ayurdic (Traditional Indian Medicine) for decades. Its proven to boost your power output, which can be useful in the gym.

The bad news is that Ashwagandha hasnt actually shown to increase your T levels in any study; so for the purposes of a T-Booster supplement such as TEST 1700, its not the best option.

However, we do consider Ashwagandha to be a useful bonus in supplements, due to it being able to raise your strength slightly (although you can easily supplement Creatine Monohydrate separately to get the same benefit).

Ultimately, in a perfect scenario, GNC Pro Performance AMP would have added Vitamin D3 instead here. But Ashwagandha isnt the worst addition to TEST 1700 at all.

Tribulus Terrestris is one of the worst ingredients you can find in testosterone boosters.

Why? Because its shown to cause an increase in prostate weight (prostate enlargement) in a few studies. Now, we dont know about you, but we prefer to avoid the risk of this from happening, as it can lead to severe male health issues.

Not only that, Tribulus Terrestris has no effect on your testosterone levels either. So in effect, this is an ineffective ingredient that can cause a nasty side effect.

Also known as Velvet Antler, this has been believed to boost your testosterone in the past. But this is only in the same way that people believe eating the heart of an animal will give them strength.

In fact, studies have actually proven that Deer Antler Horn Powder has no effect on your T levels. So this is an ineffective ingredient in TEST 1700.

Chrysin is a flavanoid compound in bee pollen, but the bad news is that its only shown to raise your testosterone levels when injected into your testicals.

Thats right, were not joking. Unless youre prepared to inject this stuff into your nut sack, its not going to work.

Personally, theres no way were injecting anything down there, so we stay away from Chrysin. But more importantly, as its in TEST 1700, youll be consuming this orally, meaning its not going to be effective here.

Safe Leaf Extract has no effect on your testosterone levels. But it has shown to help your digestive system and treat heartburn.

However, as these arent exactly key reasons why youd buy a T-Booster supplement, we dont believe Sage Leaf Extract is needed here.

In case youre wondering, this is bascially the first milk produces by cows. Its believed to act in a similar way to whey protein, but we would much prefer to consume protein shakes than this…

But most importantly, Bovine Colostrum has shown to have no effect on raising your testosterone levels.

This is another ingredient in TEST 1700 thats believed to promote muscle growth; its an active part of L-Leucine (a branched chain amino acid), so studies have shown that its simply not as effective as the BCAA.

Not only that, HMB has no effect on your testosterone levels either.

Rest Of The Ingredients

To save time and you from getting bored, weve grouped the rest of the ingredients together in a quick summary here.

Its important to know that none of the the other ingredients in TEST 1700 have any positive effect on your testosterone levels at all.

However, the best ingredient out of the bunch, is Tongkat Ali; this has shown to raise your libido, which is a useful benefit thats suited to a T-Booster supplement.

Unfortunately, the rest of the nutrients are very unreliable and not likely to boost your T levels. Ultimately, we would have preferred GNC Pro Performance AMP to have gotten rid of these ingredients and replaced them with an optimal 5000IU dosage of Vitamin D3. 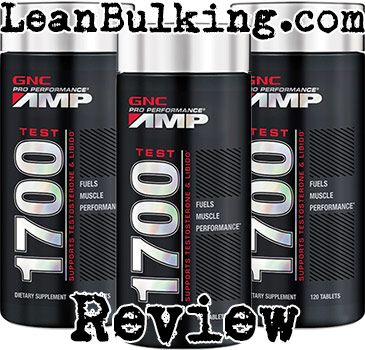 Most of the ingredients inside TEST 1700 are relatively safe, apart from Tribulus Terrestris; this has shown to cause an increase to your prostate weight, which can lead to severe male health issues in the future.

For this reason, we advise that you avoid this ingredient to stay safe - especially as Tribulus Terrestris has no effect on your testosterone levels.

Heres the potential side effects from taking TEST 1700:

We were expecting big things from TEST 1700 due to its big $89.99 price tag, but unfortunately its failed to deliver here.

The only key testosterone boosting nutrient inside TEST 1700 is Fenugreek Seed Extract. The rest of the ingredients arent actually proven to raise your T levels in any study.

Not only that, Test 1700 also contains Tribulus Terrestris, which has shown to cause prostate enlargement in a few studies; this is something were not prepared to risk.

For these reasons, we dont believe that Test 1700 is worth its big price tag.

Test 1700 wouldnt be a bad product if it was priced much lower.

But at the price of $89.99, its trying to compete with the premium products on the market, and it simply cant beat them.