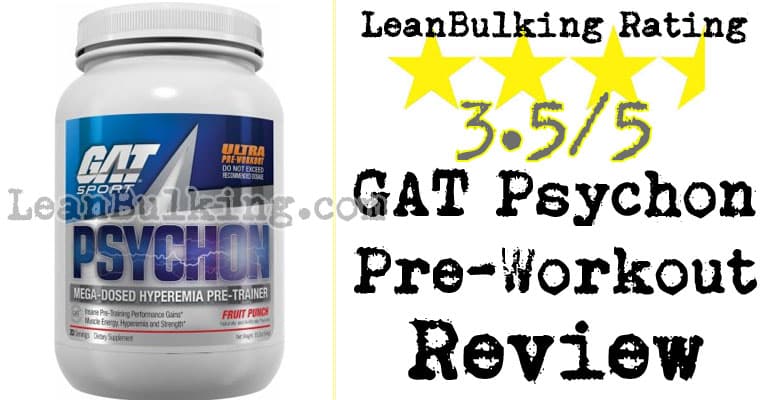 GAT Psychon is a highly rated pre-workout supplement made by GAT Sport. It costs $39.99 on Bodybuilding.com for 20 serving containers ($46.99 on GAT Sports website), making it competes with the premium options out there on the market.

Were not actually sure why this wasnt one of the first pre-workouts that we reviewed. We always knew it existed and always knew that it was a good product.

However, what excited us when we first started this website was finding new products. Sort of like when you get excited when you find new music that you like.

Just like with music though, you eventually return to the old classics. And GAT Psychon can certainly be considered as one of the original popular products on the market.

Anyway, well analyze its nutrient profile in the next section. But first, well tell you more about the company behind it.

Who Is GAT Sport?

GAT Sport has been there since we can remember. That makes sense, because theyve been around for around 20 years (which is how long weve been working in the fitness/supplements industry for) - we know, were getting pretty old…

We really respect GAT Sport for what theyve done. They were one of the first companies to say no to proprietary blends, which is something were very passionate about - great job GAT Sport!

For those that dont know, this means that GAT Sport clearly display the exact dosages of nutrients on their nutrition labels (aka. supplement facts).

Not only that, GAT Sport have sponsored some of the biggest names in bodybuilding such as Big Ramy, Sadik Hadzovic, Janet Layug, Angelica Teixeira, and Sergio Oliva Jr.

Anyway, youre here to learn more about their pre-workout - GAT Psychon. So lets see which ingredients have been added in the section below…

As we mentioned, GAT Psychon is a very popular pre-workout supplement. In fact, its this very reason that youre here reading about it and deciding whether to try it out, right?

Well, on first impression, were very happy with the ingredients in GAT Psychon; it contains some of our favorite pre-workout ingredients such as Citrulline Malate, Creatine Monohydrate, and Caffeine Anhydrous.

Not only that, most ingredients have been dosed perfectly too. So we actually dont think this is priced too badly - its not the worst value for money that weve seen.

One negative, for us personally though, is that GAT Psychon contains a HUGE 350mg Caffeine Anhydrous dosage per serving.

Why is this bad? Well, this is likely to cause us jitters and energy crashes, which is why we prefer consuming under 200mg per serving in pre-workout supplements.

But we know that there will be some people specifically looking for massive dosages of Caffeine Anhydrous to give them a big energy boost. Especially if they are very tolerant to it after drinking 5-6 black coffees per day for decades.

Ultimately, well take you through each ingredient in GAT Psychon. By the end of this review, youll have a good idea of how safe and effective this pre-workout supplement really is.

This is one of the best things about GAT Psychon.

Usually we see pre-workouts with very under-dosed servings of Citrulline Malate. However, GAT Psychon contains a massive 8,200mg per serving - which will almost definitely improve your muscle pumps in the gym.

We will point out that you only need 6,000mg Citrulline Malate for it work. But theres certainly nothing wrong with adding more if you can, so fair play to GAT Sport.

So no complaints from us here. This is a big statement from GAT Sport - not many other products will beat this dosage of Citrulline Malate, even with its big price tag.

In case youre wondering, BCAAs stands for Branched Chain Amino Acids and are made up of L-Leucine, L-Isoleucine and L-Isovaline.

They are 3 of 9 essential amino acids that you need in your diet in order to build and maintain muscle mass. So its not a bad idea to supplement them if you can.

The good news is that there is a great dosage of BCAAs overall in GAT Psychon.

However, personally we like enjoy consuming our BCAAs during our workout. And the big dosage of Caffeine Anhydrous stops you from taking this while working out.

As a result, we would rather buy BCAAs separately instead of having it in this pre-workout; we prefer BCAAs in non-stimulant pre-workout so that you can consume it whenever you want.

But theres certainly no negative to having BCAAs in GAT Psychon.

Beta-Alanine is quite a controversial ingredient for many people. This is because its proven to be beneficial and cause a side effect at the same time.

So what does it do? Well, Beta-Alanine is known for causing itchy & tingly skin (a side effect known as paresthesia). However, its also shown to be capable of improving your msucular endurance too.

The good news is that GAT Sport has clearly done its research; GAT Psychon contains an optimal 3,200mg Beta-Alanine thats proven to work in clinical studies.

So were leaving this up to you to decide whether its good or bad here. Some will be happy with its addition in GAT Psychon, while others wont be.

There is simply no arguing with Creatine Monohydrate. Everyone knows that it works and its been proven to work in numerous studies over the years.

What does it do? Well, Creatine Monohydrate boosts your ATP levels, which leads to you experiencing enhanced strength and endurance while lifting weights; you might feel its effects when youre pushing out your last rep on your last set.

Ultimately, it makes sense that being able to push yourself harder in the gym leads to more results. As a result, we consider Creatine Monohydrate as a key addition to any pre-workout supplement.

Not only that, there is a great 3,000mg dosage of Creatine Monohydrate in GAT Psychon. So great job by GAT Sport here.

Were actually quite disappointed by the addition of Choline Bitartrate in GAT Psychon. This is the first bad ingredient in this pre-workout supplement, in our honest opinion.

Why? Because Choline Bitartrate is known for causing your breath and body odor to smell fishy. Now, we dont know about you, but we dont want to smell like salmon and tuna while working weights in the gym…

On a more serious note, there have also been studies suggesting that Choline Bitartrate doesnt even work. So we have to consider this as an unreliable addition in GAT Psychon too.

Ultimately, we would have preferred to see something more useful such as L-Carnitine in GAT Psychon instead; L-Carnitine has proven to help reduce muscle fatigue and damage.

Were not quite sure why GAT Sport has added L-Ornithine into their pre-workout, GAT Psychon.

Basically, L-Ornithine is most known for being able to detox your liver (because its mainly used in the urea cycle). Its also believed to accelerate wound healing too, as well as improving the quality of your sleep.

However, there arent enough studies to suggest that it can deliver benefits to enhance your gym sessions. For this reason, we have to consider L-Ornithine as an unreliable addition to GAT Psychon.

Back to positives again. L-Tyrosine is certainly a beneficial ingredient in GAT Psychon or any pre-workout.

Why? Well, many clinical studies have shown that L-Tyrosine is capable of improving your cognition. In fact, this is why its known as a brain booster and is also a common addition to Nootropics too.

Why do you need improvements in cognition in the gym? Basically, this improves your mind-muscle-connection, meaning youll make the most of each rep by focusing on your muscle function more.

Focusing on each rep is something that you should be doing. But sometimes when youre tired, L-Tyrosine really can make a difference. So great job by GAT Sport here.

For us, this is quite bittersweet.

When dosed under 200mg per serving, Caffeine Ahydrous is a key pre-workout ingredient; theres nothing more safe or effective at boosting your energy levels.

However, for us personally, consuming the big 350mg dosage thats found in GAT Psychon is likely to cause us jittery side effects.

We understand that those who consume over 5-6 cups of black coffee per day will be fine with this dosage. So it really does depend on how tolerant you are to stimulants.

Ultimately, if you have quite an average (or low) tolerance to Caffeine then you might want to choose a pre-workout containing lower dosages.

In case youre wondering, L-Glutathione is an antioxidant naturally found in plants and fungi (among other things).

While its able to improve your general health, there isnt enough evidence to prove that its able to enhance your gym sessions.

For this reason, we consider L-Glutathione to be an unnecessary addition to GAT Psychon. We would have preferred to see L-Carnitine here instead.

You might be confused and thinking why GAT Sport has added Black Pepper Extract to GAT Psychon. Well, its not to make it taste better…

Basically, Black Pepper Extract contains concentrated amounts of piperine; this has shown to increase the absorption rate of supplements that its added to.

So while this isnt going to be a key addition to any product, Black Pepper Extract isnt a bad bonus ingredient to have here. 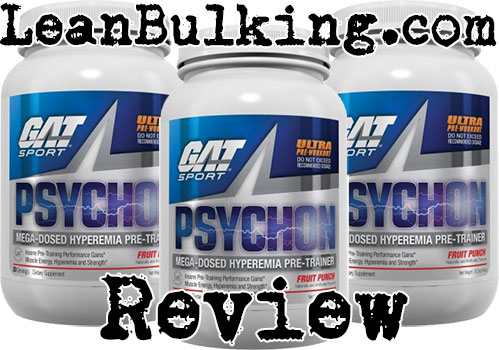 In terms of side effects, there are 3 potential negatives of GAT Psychon.

Well quickly summarise; the 350mg dosage of Caffeine Anhydrous might cause jitters and energy crashes. Choline bitartarte has been linked with causing your body odors and sweat to smell fishy. Finally, Beta-Alanine can cause your skin to feel itchy and tingly.

Ultimately, we personally dont like consuming more than 200mg Caffeine Anhydrous per serving. But those that are very tolerant to this stimulant might be able to handle the 350mg dosage effectively - its very personal and subjective.

Our advice to you is to judge your tolerance of Caffeine Anhydrous on how much coffee you consume on a daily basis. If you consume more than 6 black coffees per day, then you might be okay consuming GAT Psychon.

Here are the potential side effects from taking GAT Psychon:

Overall, GAT Psychon isnt a bad pre-workout supplement at all. In fact, its actually one of the better products weve seen over the years.

There are many great things about GAT Psychon; it contains optimal dosages of Citrulline Malate and Creatine Monohydrate, which are 2 key pre-workout ingredients that we always look for.

Its for this reason that we dont actually think GAT Psychon is bad value for money. But there is some negatives that bring this product down, in our honest opinion.

Saying that, we appreciate that there are some people who need tons of Caffeine Anhydrous to benefit from it due to having a very high tolerance to it.

There are many things to like about GAT Psychon. The huge dosages of Citrulline Malate and Creatine Monohydrate are great and GAT Sport deserve a lot of praise for this.

However, we personally would suffer from jittery side effects due to the 350mg dosage in GAT Psychon.

For this reason, we dont think that GAT Psychon can compete with the highest rated pre-workouts available right now.