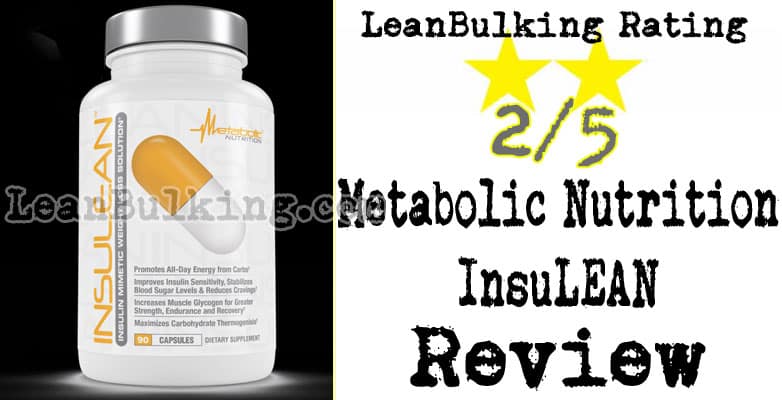 About The Product: Metabolic Nutrition InsuLEAN

InsuLEAN is a fat burner (thermogenic weight loss) supplement made by Metabolic Nutrition. It costs $39.99 for 30 serving containers, with a serving size of 3 capsules per day; this is a great serving size to keep you fueled throughout the day.

We really like the thought behind this product. We completely back Metabolic Nutritions intention of encouraging people to not cut carbs completely from their diet. Ultimately, if youre not eating under your calorie limit for fat loss, you wont lose any weight.

But one thing is that we believe appetite suppressants are more important than carb blockers; this is because lowering your calorie intake promotes fat loss more than simply blocking out the effects of carbs (in our honest opinion).

Anyway, well analyze Metabolic Nutrition InsuLEANs nutrient profile for you in the next section. But first, well tell you more about the company behind it.

Who is Metabolic Nutrition?

While Metabolic Nutrition might not be a household name, theyve been around for almost 30 years. So, this makes them one of the oldest supplement companies out there.

In terms of popularity, this companys fan base is certainly increasing. But we dont believe that theyre selling as much worldwide as a more well-known brand such as Optimum Nutrition or MuscleTech yet.

Metabolic Nutrition make many different types of products such as pre-workouts, but youre here to learn more about their fat burner, InsuLEAN. So lets see which ingredients have been added to this supplement in the section below…

One thing that we really like about Metabolic Nutrition InsuLEAN is that it has a completely transparent nutrient profile; this means that you can see the exact dosages of individual ingredients in this fat burner.

We also appreciate that this product is mostly geared towards helping your body to deal with carbs better (so the insulin spike after consuming carbs doesnt affect you as much).

However, you cant ignore that this fat burner is still sold as a thermogenic weight loss solution. And were not as impressed with the ingredients inside.

Well expand on this as we take you through each ingredient inside Metabolic Nutrition InsuLEAN. By the end of this review, youll have a good idea of how safe and effective this fat burner supplement really is.

We mentioned that Metabolic Nutrition InsuLEAN has been created to try and help you deal with carbs better. Well, Gymnema Sylvestre Powder is believed to help control blood sugar levels in diabetics.

However, there simply have not been enough studies to show that its able promote fat loss. For this reason, we have to consider Gymnema Sylvestre Powder as an unreliable addition here.

Berberine is another ingredient thats believed to decrease insulin resistance to help control blood sugar levels. If this does work, then it might help you to lose weight.

However, its too early to confirm whether Berberine does work; there simply havent been enough studies conducted on this nutrient either.

As a result, for now, Berberine is an unreliable ingredient in our honest opinion. We will, however, keep an eye on all future studies and an open mind about Berberine. And ultimately, we do respect that Metabolic Nutrition have tried something new by adding less popular ingredients in InsuLEAN.

Similarly to the other ingredients in Metabolic Nutrition InsuLEAN so far, Alpha Lipoic Acid (more commonly known simply as ALA) is another insuluin sensitivity improving nutrient.

However, the only studies that show positive effects in weight loss is when subjects consumed 1,800mg dosages of ALA. The bad news is that Metabolic Nutrition InsuLEAN only contains 300mg, which is much less.

For this reason, were not convinced that this small dosage of ALA is enough for it to work here.

In case youre unaware, this is a spice thats most commonly used in African cooking to season food. Its known for being spicy in a similar way to chilies, but tastes more peppery like black peppercorns.

Why is this important? Well, its important to know that Grains of Paradise doesnt contain capsaicin (which is the thermogenic in chili peppers that make effective at promoting fat loss).

However, we have seen studies that suggest Grains of Paradise can be effective when consumed in 30mg dosages per day. The good news is that Metabolic Nutrition InsuLEAN contains 100mg of this ingredient, so if it works, then its likely to do so in here.

Also known as Bitter Orange Extract, we are personally against the use of this ingredient in supplements.

Why? Because, Bitter Orange Extract has been linked with causing numerous side effects in the past.

However, we cant ignore that there have been studies that show Citrus Aurantium to be effective at promoting fat loss. So while it does work, in our honest opinion, it comes with the risk of side effects.

Ultimately, we dont believe that theres any need to consume ingredients that might cause side effects. There are safe and effective thermogenics (such as Green Tea Extract) available. So we would rather choose Green Tea Extract instead of Citrus Aurantium.

You might be wondering what Theacrine is. Well, its known for being a stimulant that acts in a similar way to Caffeine.

One benefit of Theacrine is that its believed to users dont build up a tolerance to it. So this might be great for those that normally consume bucket loads of coffee and needs massive dosages of Caffeine to give them a hit.

Call us old fashioned, but we like to stick to more tried-and-tested stimulants such as Caffeine; as Theacrine is a much newer discovery in the supplements world, there havent been as many studies - meaning its not as safe as Caffeine Anhydrous, in our honest opinion.

However, we do respect that Metabolic Nutrition have gone for less frequently used ingredients in InsuLEAN. And who knows, Theacrine might be proven to be better than Caffeine Anhydrous in future.

Until then though, well continue to prefer Caffeine Anhydrous - if its not broken, then theres no need to fix or replace it.

Evodiamine is a compound thats extracted from plants. Its been used in studies that have used mice as subjects, which has yielded positive results.

However, we always look for human trials, as these are the most important and reliable studies. And the bad news is that there havent been many studies using human subjects.

As a result, we have to consider Evodiamine to be an unreliable addition to Metabolic Nutrition InsuLEAN for now.

You wont be surprised to hear that Vanadyl Sulfate is linked with improving insulin sensitivity.

However, the bad news is that studies have shown that participants consuming up to 300mg had not experienced dramatically improved insulin sensitivity or glycemic control. As Metabolic Nutrition InsuLEAN contains 30mg, its not very likely to work here, in my honest opinion.

Finally, this is an ingredient worth talking about. And we believe that this is the best ingredient in Metabolic Nutrition InsuLEAN.

Why? Capsicum is also known as chili pepper, and chili peppers contain capsaicin; this compound has been proven to be a thermogenic capable of promoting fat loss in numerous studies.

Basically, capsaicin is responsible for chili peppers delivering that spice after you eat them. And as youll know, this spice causes your body temperature to rise, therefore making your body work harder to cool itself down (by sweating etc).

Ultimately, as your body is works harder, it also burns more calories in the process - resulting in accelerated fat loss.

However, chili pepper extracts have been known to be more effective when consumed in dosages of 100mg or more. As InsuLEAN only contains a tiny 5mg, were not convinced it will be effective here (this emphasis the importance of dosing nutrients correctly).

But when dosed better, chili pepper extracts can be a key addition to any fat burner supplement.

If your wondering why Black Pepper Extract has been added to Metabolic Nutrition InsuLEAN, then its because it contains a compound called piperine.

What does piperine do? Well, piperine is capable of improving the absorption rate of other ingredients that its consumed with.

So, while Black Pepper Extract is never going to be a key addition to any product, we consider it as a useful bonus addition in Metabolic Nutrition InsuLEAN. 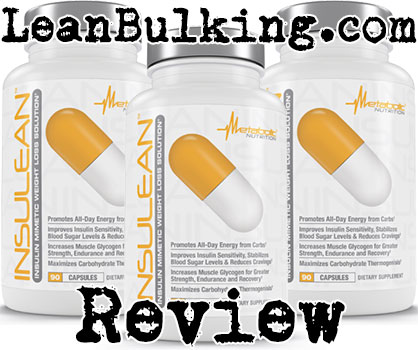 The main concern with Metabolic Nutrition InsuLEAN is that it contains Citrus Aurantium (Bitter Orange Extract). As we mentioned, this has been linked with numerous side effects, so its something we try to avoid when possible.

The good news, though, is that the rest of the ingredients in Metabolic InsuLEAN havent shown to consistently cause side effects.

Here are the potential side effects of taking Metabolic Nutrition InsuLEAN:

However, at the same time, we personally prefer tried-and-tested ingredients that have proven to work through years of clinical studies. So, while some of the nutrients in Metabolic Nutrition InsuLEAN might become more commonly used in the future (if more trials prove that they work), we dont believe they are reliable yet (in our honest opinion).

Ultimately, we do respect what Metabolic Nutritions ambition to create something new. And who knows, in a few months (or years), we might reevaluate our decision on this fat burner to make it one of the better products on the market.

Metabolic Nutrition InsuLEAN mostly relies on ingredients that havent been very well tested or studied. But we do respect this companys ambition to be different from the other ones out there.

However, as it stands, we dont believe that Metabolic Nutrition InsuLEAN can compete with the highest rated fat burners on the market available right now.