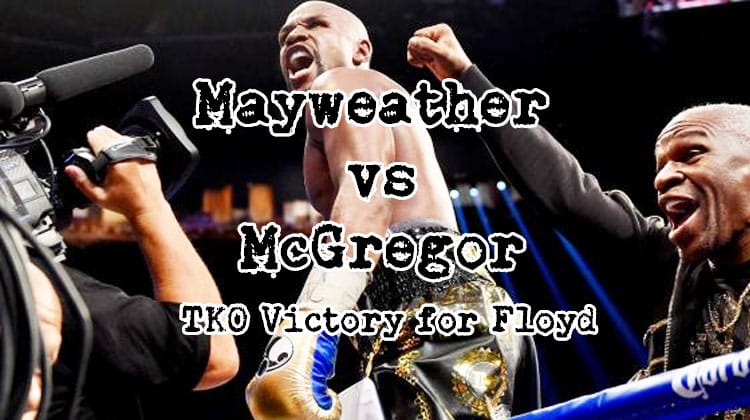 McGregor couldnt cause an upset and beat the future hall of famer at his own game.

Even if you werent a massive fan of UFC (MMA) or boxing before, youll still have been keeping an eye on this fight. Albeit you might not have stayed up to watch it live (if youre in the UK).

For this reason, weve decided to give you a quick overview of the fight, in case you couldnt be bothered to watch it, but still want to know the result.

Alright, so lets get to the facts, and what you probably came here to find out. Floyd Mayweather won the fight via TKO (technical knock out) in the 10th round, which is a very respectable effort from Conor McGregor, considering hes not even a professional boxer.

And lets be brutally honest here, if Mayweather stepped into the octagon with McGregor, then the fight wouldnt last more than 1 round. But saying that, at the age of 40, Mayweather managing to outclass a 29-year-old UFC champion in his peak, is definitely still an achievement - especially as he put his career record on the line.

During the early rounds, Floyd put his hands up and stayed on the defensive, allowing Conor to attack him. However, the more the fight went on, the clearer it became that this was his game-plan - and it worked.

After the 4th round, Mayweather came to life and took the offensive. Although neither fighters were ever going to fall face first onto the mat (Rocky Balboa style), it was still a convincing victory for the 40-year-old boxing legend.

Weve posted a video of the full fight below (but dont blame us if it gets taken down).

As always, McGregor was respectful after the fight, despite his trademark trash-talking during the pre-fight press conferences. As was Mayweather, as he handed his opponent some praise.

Mayweather: Hes a tough competitor. Our game plan was to take our time, let him shoot all his heavy shots early and then take him out at the end down the stretch.

Hes a lot better than I thought he was. He used different angles. He was a tough competitor, but I was the better man tonight.

A win is a win, no matter how you get it. Rocky Marciano is a legend, and I look forward to going into the Hall of Fame one day.

I gave the fans what they wanted to see, told them that I owed them for the Pacquiao fight. Thought to myself, I must come straight ahead and give them a show. This was my last fight tonight ladies and gentlemen, for sure.

McGregor: I thought I took the early rounds pretty easy. Hes composed. Hes not that fast, hes not that powerful, but boy, is he composed.

I thought it was close … I get a little floppy when I get tired … [Floyd] was a lot more composed. Youve got to give it to him … I dont know if I will box again

I had a bit of fun over on this side. Hopefully I entertained the fans on this. I thought it was close, though. And I thought it was a little early of a stoppage. I get like that when Im tired.

I get a little wobbly and flowy. But get me into the corner and Id have recovered and come back.

Id have liked to hit the floor. I thought Let me go down, let the man put me down. theres a lot on the line here, he should have let me keep going, I thought.

Even if you werent really bothered about this fight, its all youll be seeing on TV or the newspapers today. Was it worth it? Maybe.

It wasnt exactly the blood-bath that UFC fans are used to seeing in the octogon, and avid boxing fans would have been slightly shocked by McGregors unorthodox boxing style (and the rabbit punches and other shots he probably could have been sanctioned for).

However, although Ricky Hattons fight with Mayweather was in 2007 (when Floyd was in his early 30s), Conor McGregor still managed to last the same amount of time as him. Why are we comparing McGregor to Hatton? Well, Hatton was a highly respected boxer at the time he lost, even delivering Castillo his first TKO.

So taking this into consideration, McGregor lasting the same amount of time in the ring as Ricky Hatton is actually pretty impressive.

But what do we know? Were experts in fitness and nutrition - and we even know a fair amount about mixed martial arts. But to be honest, we dont know sh*t about boxing (we only wrote this as one of our fans wanted our input).

If you want to read some articles where we actually know what were talking about, check out our expert guides here (we put this article in there as we dont have a boxing category, so ignore this one, but the others are pretty good…)