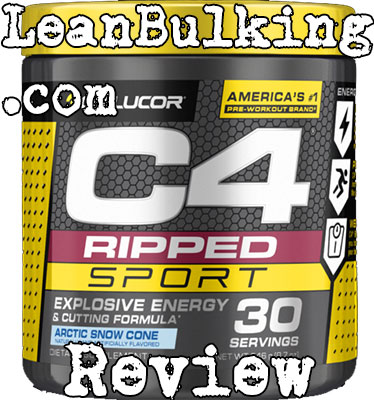 C4 Ripped Sport is a pre-workout supplement thats also aimed to help you lose body fat, made by Cellucor. It comes in 30 serving containers, but we noticed that its only available in 1 flavor option of Arctic Snow Cone (at the time of writing this review).

It costs $22.99 making it very reasonably priced. In fact, in todays market, this might even be seen as a budget product, so we hope that it can compete with the higher priced pre-workouts on the market.

Anyway, well take a look at the ingredients inside Cellucors C4 Ripped Sport in the next section. But first, well tell you more about the company behind it.

In all honesty, if you havent heard of Cellucor, then you most likely new to supplements. This company is one of the biggest names in the industry, and their original C4 pre-workout has helped thrust Cellucor into the limelight for years.

However, youre here to learn more about this new release for 2018 - C4 Ripped Sport. So lets see which ingredients have been added to this pre-workout/fat burner hybrid below…

We like Cellucor. Only bias websites will say otherwise, and theres a reason why this company is held in such high regard - theyve produced some extremely respectable supplements on the market in the past.

However, one thing we will say is this: we personally arent convinced by hybrid supplements, and prefer to buy specialized products. That means well buy a pre-workout to improve our performance in the gym, and well buy a fat burner when aiming to shred body fat.

Why? Because were not sure that any product is capable of doing both at the same time.

The reason why we dont choose to supplement hybrid supplements

Think about it. You take one serving of pre-workout before the gym, and Cellucor C4 Ripped Sport comes with 1 serving daily.

However, clinical studies show that thermogenic nutrients (such as green tea extract) are best taken multiple times throughout the day.

An even bigger issue we have with Cellucor C4 Ripped Sport claiming to help you cut fat is the lack of thermogenic ingredients; our favorite nutrients such as green tea extract havent been added.

Additionally, Cellucor has placed every ingredient in this pre-workout into 2 separate proprietary blends (well expand on this below).

Proprietary blends are mixtures of numerous ingredients that are only shown to you as 1 quantity. As you can see from the C4 Ripped Sport Performance Blend on this fat burners ingredients list, the overall amount is 3,941mg - but youre not shown the dosages of each ingredient inside such as Beta-Alanine.

This increases your risk of side effects, and also makes it uncertain whether Cellucor C4 Ripped Sport will work. For this reason, we try to avoid any supplement that contains proprietary blends.

Now you know why we try to stay away from supplements containing proprietary blends. But its not all bad news for this pre-workout - in fact, there are many good aspects to it too.

In terms of being a pre-workout supplement, Cellucor C4 Ripped Sport contains some great additions; the likes of Citrulline Malate, L-Carnitine, and a well-dosed Caffeine Anhydrous are key to making a successful pre-workout, in our honest opinion.

So its evident that Cellucor has done their research into what makes a quality pre-workout.

Anyway, well take you through the main ingredients in this pre-workout supplement. By the end of this review, youll have a good idea of how safe and effective Cellucor C4 Ripped Sport really is. 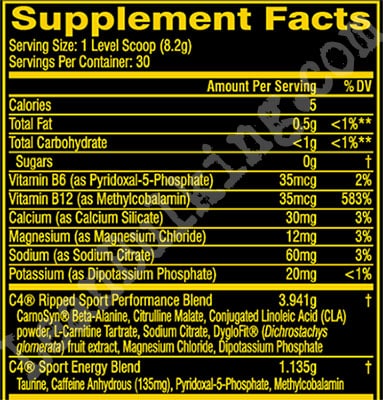 Theres a reason why Beta-Alanine is seen in most pre-workout supplements on the market - it works.

What does it do? Well, its shown to improve muscular endurance, making it an ideal for helping to raise your performance in the gym.

However, the bad news is that Beta-Alanine has been added to a proprietary blend in Cellucor C4 Ripped Sport. This means that youre not shown the exact dosage of Beta-Alanine in this pre-workout supplement, meaning it might not work.

How much is needed for Beta-Alanine to work? Well, studies have shown that you need servings of around 2,000mg.

As Beta-Alanine has been placed into a proprietary blend, youll never know whether it has been optimally dosed (unless Cellucor makes an official announcement, which probably wont happen).

Not only that, Beta-Alanine has shown to cause a side effect called paresthesia; this is basically tingly & itchy skin, and while its harmless, it personally distracts us from our gym session, so wed rather consume Creatine Monohydrate instead (which offers the same benefit as Beta-Alanine, without causing any side effects).

A very wise man once said that the sensation of muscle pumps was comparable to orgasms - none other than Arnold Schwarzenegger.

While muscle pumps might not be as great as that, you cant deny that nothing beats watching your arm inflate and look swole! So this is why Citrulline Malate is one of our favorite ingredients to consume in pre-workout supplements.

What does it do? Well, Citrulline Malate has proven to raise your nitric oxide level, which leads to more blood and oxygen being pumped into your muscles.

However, its only shown to be effective in dosages of 6,000mg or above; this is a problem with C4 Ripped Sport, as its been placed into a proprietary blend - meaning youre not shown the exact amount in C4 Ripped Sport.

For this reason, we cant state whether Citrulline Malate will be effective in this pre-workout supplement. Ultimately, this is a great example of why we dont like seeing proprietary blends in supplements.

In case youre wondering, CLA stands for Conjugated Linoleic Acid. Its a group of fatty acids that are believed to have a positive effect on fat loss.

However, the bad news is that studies show its not the most reliable nutrient to have in a supplement; we prefer tried-and-trusted thermogenics, such as Green Tea Extract.

As a result, its not likely that CLA will be able to contribute to Cellucor C4 Ripped Sports marketed ability to help you get shredded.

L-Carnitine is definitely one of the key additions to Cellucor C4 Ripped Sport. Its proven to help reduce muscle fatigue and damage, while also being able to improve your mind-muscle-connection in the gym.

However, the bad news is that its been included in a proprietary blend; this means youre not shown the exact amount in Cellucor C4 Ripped Sport, so it might not be optimally dosed here.

In fairness though, well point out that the proprietary blend is huge. So there should be more than enough space for each ingredient to have been dosed well.

But in our honest opinion, we believe if a company is generous enough to dose every ingredient optimally and spend more money on doing so, then theyll definitely want to market this fact.

Think about it, when most celebrities donate money to charity, theyll make the most of it by plastering it all over their social media to improve their image.

Ultimately, this is why were always skeptical of proprietary blends. Whats the point of spending big money to dose things perfectly if youre not going to show it off? (just our honest opinion).

We must be getting old because we havent heard of this nutrient before. Maybe we just need to keep up with the kids more…

Anyway, after asking some specialists and doing some research, we found that the official name for this ingredient is Dichrostachys Glomerata.

What is it? Well, its believed to be an ancient spice thats been used in cooking, for a very long time, in Africa.

The reason why its been added in Cellucor C4 Ripped Sport is because its shown promising results in helping to raise your metabolism and promote fat loss. However, there simply havent been enough studies to make this a reliable ingredient, in our honest opinion.

So call us old fashioned, but for now, well be sticking with tried-and-tested thermogenics such as Green Tea Extract. But we are glad that Cellucor are keeping up with the times and adding newer nutrients to their products.

Even if youre new to supplements, youve most likely heard of Taurine before; this is because its commonly added to energy drinks, so many mistakenly believe that its a stimulant.

While its not able to raise your energy levels, Taurine has shown to help prevent cramping, which is still useful.

For this reason, while Taurine will never make or break a product, we always consider it to be a useful bonus addition to any supplement.

Theres a lot of non-stim supplements out there now, but we still believe that Caffeine Anhydrous should be a staple in all pre-workouts.

Why? Because its the best ingredient for raising your energy levels and giving you that kick you need after a hard day at work. And itll only cause jitters when consumed in dosages that are too high.

The good news is that Cellucor has dosed Caffeine Anhydrous perfectly in Cellucor C4 Ripped Sport; we always recommend that you consume under 200mg per serving to stay safe, and theres a sensible 125mg dosage here.

Well praise Cellucor for not including Caffeine Anhydrous into a proprietary blend and to choose to provide its exact dosage instead. But we just wish that theyd done this with every other nutrient in Cellucor C4 Ripped Sport too. 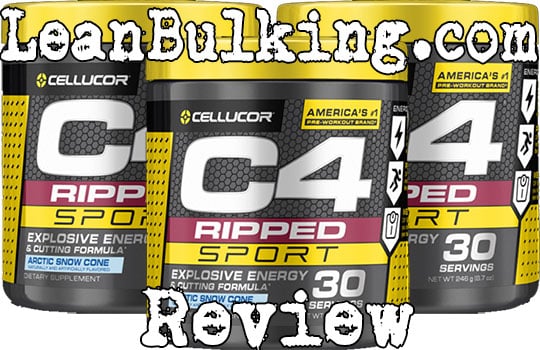 Youll be glad to hear that Cellucor C4 Ripped Sport doesnt contain any ingredients that will cause any serious side effects. But that doesnt mean that its side-effects-free.

As we mentioned in the previous section, Beta-Alanine is well-known for causing a side effect called paresthesia; this is a tingly & itchy sensation that, personally, distracts us when were trying to focus on lifting heavy weights in the gym - its not nice feeling like you need to itch your arm while halfway down a squat on a personal best…

But as this isnt a serious side effect thats going to affect your health, Cellucor C4 Ripped Sport still gets the thumbs-up from us. We just wish that Beta-Alanine had been replaced with Creatine Monohydrate (in our honest opinion).

Hopefully, we dont sound like weve been overly critical of Cellucor C4 Ripped Sport; we really respect this company, and pre-workout supplements might not be as popular as they are if Cellucor hadnt released their original C4 product years ago.

For the most part, this is a very good product that deserves a place on the market. It contains some key pre-workout ingredients such as L-Carnitine, Citrulline Malate and Caffeine Anhydrous - so its clear that Cellucor C4 Ripped Sport has been formulated well.

However, we cant ignore the fact that most ingredients have been added to proprietary blends. So youre not shown the exact dosages of each nutrient, and we personally much prefer knowing exactly what we put into our body.

Not only that, we personally like to try and avoid Beta-Alanine, as we dont enjoy its itchy & tingly side effect that it causes most of the time.

Overall though, were sure that many people are going to enjoy Cellucors pre-workout released in mid-2018.

But the real killer for us is that every nutrient has been added into proprietary blends, so youll never know if theyve been dosed optimally.

This pre-workout is also missing some key ingredients such as Creatine Monohydrate.

For these reasons, we dont believe that it can compete with the highest rated pre-workouts on the market right now.