See Your Best Option In Our
- Top 3 Fat Burners Page - 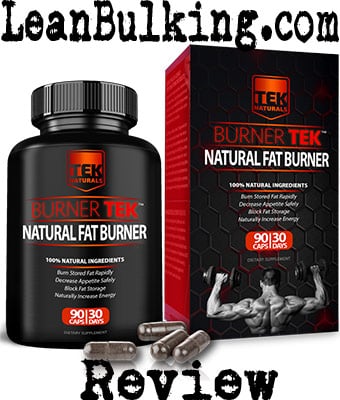 BurnerTEK is a fat burner supplement made by Tek Naturals. It come in 30 serving containers for $59.99, and contains some of our favorite fat burning ingredients.

TEK Naturals is a supplements company based in the USA. They seem to have pretty much copied Roar Ambitions fat burnerand testosterone booster - as both TEK Natural products contain almost identical ingredients.

However, were not complaining as we like both products for this reason.

So as long as TEK Naturals has dosed each ingredient optimally, this will be getting a place in our top 3 products in 2017. Lets see whether BurnerTEK can make the cut. 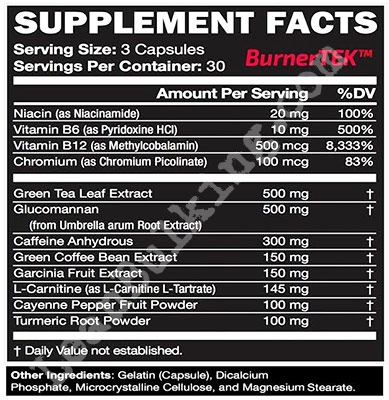 Great start by TEK Naturals. Green Tea Extract is one of our favorite fat burning ingredients for one reason - it works.

Basically, Green Tea contains catechins, which are proven to benefit every organ in your body. Not only that, its shown to significantly promote fat loss in dosages upwards of 400mg per day.

BurnerTEK contains 500mg, so Green Tea Extracts been optimally dosed here. It doesnt matter whether you drink this as tea, or consume it in a supplement - but as some dont enjoy the taste of tea, its easier to have it in a pill.

Also known as Konjac Root, this is out favorite ingredient in any fat burner. Ive consumed this both as konjac noodles and in a fat burner supplement - and it worked in both.

I prefer consuming it in a pill, as it doesnt taste great as noodles (you cant beat pasta).

What does it do? Well, it suppresses your appetite - making it easier for you to lower your calorie intake, and therefore lose body fat easier.

But TEK Naturals has made a mistake here. Simply put, you need at least 1,500mg (1.5g) of Glucomannan to experience its benefit.

Unfortunately, BurnerTEK only contains 500mg, so its not likely to keep you full for long (if at all).

Caffeine is the best stimulant you can find in any supplement. Its shown to improve your strength, endurance, and focus.

Just watch out for the dosages of caffeine - many products contain an overload, which can lead to jitters or energy crashes.

BurnerTEK contains an optimal 300mg per day (split through 4 separate servings), so youll avoid any side effects while experiencing the benefits.

L-Carnitine can be a great addition to a fat burner, and its actually part of our favorite pre-workout of 2017. However, we can tell that TEK Naturals hasnt done their research here.

Basically, L-Carnitine L-Tartrate improves your focus, but hasnt shown to be great at promoting fat loss (which is what we want here).

The better option wouldve been including ALCAR (Acetyl-L-Carnitine), as the main benefit of this form is to boost your fat burning potential.

An easy mistake to make, but its cost BurnerTEK the top spot in our top 3 fat burner rankings.

If youve eaten a chilli before, youll know that its spice can make you sweat. Well, this is exactly what helps you burn belly fat,

Answer: Cayenne Pepper raises your body temperature as its a thermogenic ingredient, which boosts your metabolism. In a nutshell, the higher your metabolism is, the easier it is for you to lose fat.

Its been dosed well, so no problems here.

This is the worst ingredient inside BurnerTEK. Its not shown to benefit you in any studies. 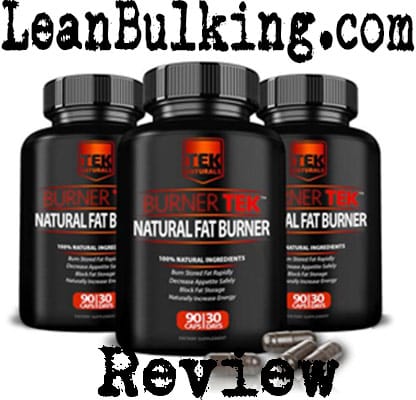 See Your Best Option In Our
- Top 3 Fat Burners Page -

The good news is that BurnerTEK doesnt contain any ingredients thatre likely to cause side effects. We recommend avoiding supplements that contain potentially harmful ingredients such as Synephrine - to stay safe and get the most for your cash.

BurnerTEK is very similar to our favorite fat burner Instant Knockout - but this isnt a bad thing. In fact, this is why BurnerTEK is beign placed 2nd on our top 3 fat burners list.

Ultimately, this fat burner contains some of our favorite ingredients. However, not all ingredients have been dosed correctly (especially Glucomannan).