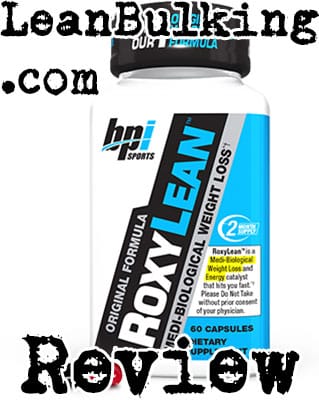 RozyLean is a fat burner aimed at women, made by BPI Sports. It costs $39.99 on GNC.com and comes with a serving size of 1 capsule daily; this could be better, as studies show 3-4 servings can keep your body fuelled in fat burning mode for longer.

We’ll analyze RoxyLean’s nutrient profile in the next section. But first, we’ll tell you more about the company behind it.

Who are BPI Sports?

BPI Sports are a well-known supplements company based in the USA. They offer a variety of products, including pre-workouts, protein powders and fat burners like RoxyLean.

We didn’t learn much about their company on the ‘about us’ page of their website. So without wasting anymore time, let’s see which ingredients have been added to RoxyLean below…

RoxyLean contains 8 ingredients overall, which is a good number to have in a fat burner. But our main issue is that every ingredient has been added to a proprietary blend (we’ll expand on this below).

Proprietary blends are mixtures of numerous ingredients that’re only shown to you as 1 quantity. As you can see from the ‘ROXYLEAN Blend’ on this fat burner’s ingredients list, the overall amount is 510mg – but you’re not shown the dosages of each ingredient inside such as Caffeine Anhydrous.

This increases your risk of side effects, and also makes it uncertain whether RoxyLean will work. For this reason, we try to avoid any supplement that contains proprietary blends.

Anyway, now that you have our honest opinion on proprietary blends, we’ll take you through each ingredient in RoxyLean. By the end of this review, you’ll have a good idea of how safe and effective this fat burner really is. 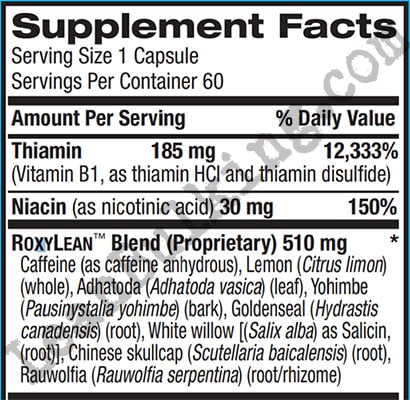 Caffeine Anhydrous is the best stimulant you can find in supplements. It’s basically a pure form of caffeine that’s been dehydrated into powder form, so it can be added to capsules.

But the main problem we have is that Caffeine Anhydrous has been added to a proprietary blend; this means you’re not shown the exact dosage of this stimulant in RoxyLean.

Why is this a problem? Well, consuming too much caffeine can cause jittery side effects and energy crashes. So it’s always better to know exactly how much you’re in-taking at all time.

For this reason, we would have personally preferred BPI Sports to have not used any proprietary blends in RoxyLean.

This is the first time that we’ve seen a lemon being added to a supplement. While lemons contain high amounts of vitamin c and can help improve your general health, it’s not going to be as effective as thermogenics such as Green Tea Extract.

But if lemon was added alongside other key ingredients, it would have made a great ‘bonus’ ingredient in RoxyLean.

Also known as ‘Malabar Nut’, this is a shrub that is found in India and in the Himalayans. It’s roots, leaves, flowers and stem bark has traditionally been used as medicine (to cure colds and sore throats).

It’s believed to be a thermogenic that boosts your metabolism by raising your heart rate and body temperature. However, there aren’t enough studies to prove whether it works.

For this reason, we have to consider Adhatoda to be an unreliable addition to RoxyLean (in our honest opinion).

Basically, many people have reported side effects after consuming Yohimbe Bark Extract, so it’s something that we personally try to avoid.

Now, we will acknowledge that Yohimbe Bark Extract has shown to be capable of promoting fat loss. But as it’s also reported to cause side effects, we still wouldn’t recommend it.

Ultimately, there’s no need to risk your health when aiming to lose body fat. Especially when there’s safe and effective nutrients available, such as Green Tea Extract, which is proven to help you trim down.

Goldenseal is a herb that’s often brewed as tea. It’s known for its inflammatory, and anti-bacterial effects, so there’s no doubt it’s beneficial for your general health.

However, you buy a fat burner supplement to lose weight, not just boost your immune system. And there’s no evidence to prove that Goldenseal is effective at helping you trim down body fat.

For this reason, we have to consider this to be an unreliable addition to RoxyLean here.

We’re still not sure about White Willow Bark Extract being added to supplements.

Why is it added? Well, it contains salicin, which is known for having a similar effect to aspirin (being a painkiller).

We believe that companies add this to help ‘numb’ hunger pains to help you eat less. But this isn’t the best way of doing things.

Personally, we would have preferred to see an actual appetite supressant such as Glucomannan; this fiber safely expands in your stomach, making you feel full for longer and is commonly eaten in Japan.

The main use for Chinese skullcap is treating respiratory infections and liver issues. But as we mentioned before, you’re most likely interested in buying RoxyLean to cut body fat, not as a cure for your illness.

Ultimately, there haven’t been any studies that prove Chinese Skullcap is effective at promoting fat loss. So this is another unreliable addition to RoxyLean, in our honest opinion.

This is one of the worst additions to any fat burner supplement; it’s been commonly reported to cause side effects, which is why we choose to stay away from it.

But we will acknowledge that there have been successful studies showing that it’s able to promote fat loss.

Even so, we would advice you to look for safer and more effective thermogenic nutrients such as Green Tea Extract instead; everyone knows Green Tea Extract boosts your metabolism and is great for your general health, so it’s hard to argue against it. 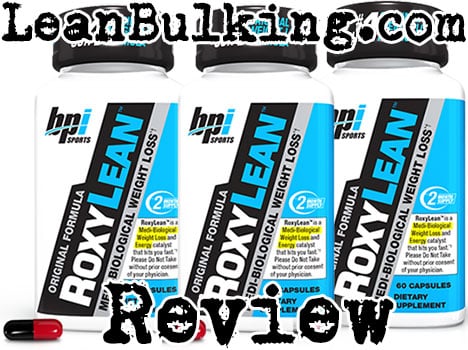 In our honest opinion, there are a few things that could potentially cause side effects in RoxyLean; Caffeine is included in an unknown dosage, so those sensitive to stimulants might suffer jittery side effects, while Yohimbe Bark Extract & Rauwolfia Vomitoria Extract have both been reported to cause a variety of side effects.

For this reason, we always recommend choosing fat burners that don’t contain any proprietary blends. Especially when they contain stimulants such as Caffeine – it’s much better to know exactly how much you’re putting into your body, to stay safe.

Here’s the potential side effects from taking RoxyLean:

Overall, this is a classic example of a fat burner aimed at women without any justification. There’s no reason that this should be a ‘female only’ product, and we don’t believe it can compete with higher quality fat burners that haven’t had a gender slapped onto the packaging.

Apologies if we’re being a bit critical, but remember that this is simply our honest opinion.

Saying that, RoxyLean is far from the worst fat burner supplement we’ve seen on the market; you can tell that BPI Sports have completed some research and tried to add beneficial ingredients into this product.

Due to ingredients such as Yohimbe Bark Extract & Rauwolfia Vomitoria Extract contained in unknown amounts, potentially causing side effects, we can’t recommend RoxyLean to you.

Instead, we recommend looking at our best fat burner for women page to learn everything you need to know when choosing a supplement.

Check Out The Best Fat Burners For Women!