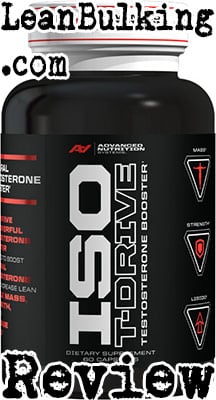 Iso-T Drive is a testosterone booster supplement made by Advanced Nutrition Systems. It costs $99.99 for 30 servings, making it one of the most expensive test boosters on the market, with a serving size of 2 capsules daily.

Now, Iso-T Drive’s serving size could be better; studies show that 3-4 capsules daily keeps your body fuelled so you get better results.

From first glance, we’re happy that Advanced Nutrition Systems have added a key T-Boosting nutrient such as D-Aspartic Acid. But we do have a few problems, which we’ll expand on in the next section.

For now, we’ll tell you more about the company behind Iso-T Drive.

Who are Advanced Nutrition Systems?

Advanced Nutrition Systems are a USA-based supplements company. They’re very highly rated on GNC.com, but their products all come with some of the highest price tag’s we’ve seen on the market.

We like Advanced Nutrition System’s ‘about us’ page. They haven’t messed around boosting their ego, keeping it simple and telling us important information; such as their supplements are made under FDA’s Good Manufacturing Guidelines.

But you’re here to learn more about Iso-T Drive, so let’s see which ingredients have been added below…

Our first impressions are generally quite good. Iso-T Drive contains some great ingredients such as D-Aspartic Acid, which is proven to raise your T levels in a certain dosage.

However, there are some issues that we personally have, such as every ingredient being included in a proprietary blend (we’ll expand on this below).

Proprietary blends are mixtures of numerous ingredients that’re only shown to you as 1 quantity. As you can see from the ‘Iso-T Boosting Complex’ on Iso-T Drive’s ingredients list, the overall amount is 945mg – but you’re not shown the dosages of each ingredient inside such as DIM.

This increases your risk of side effects, and also makes it uncertain whether this test boosters will work. For this reason, we try to avoid any supplement that contains proprietary blends.

Anyway, we’ll explain everything in more detail as we take you through each ingredient in Iso-T Drive. By the end of this review, you’ll have a good idea of how safe and effective this testosterone booster really is. 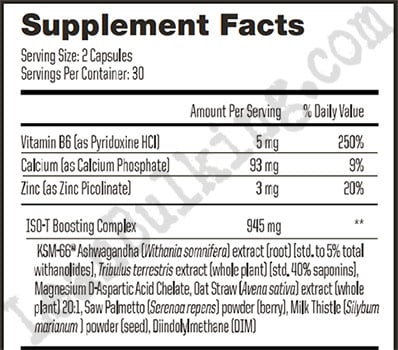 Ashwagandha is a herb that’s been used in Ayurvedic (Traditional Indian Medicine) for decades. It’s shown promising results of being able to raise your power output in clinical studies.

But the bad news is that Ashwagandha hasn’t shown to be capable of raising your testosterone levels in any study. For this reason, while it is useful, we would have still preferred a nutrient such as Vitamin D3, which is tried-and-tested to get the job done.

Tribulus Terrestris is another Ayurvedic herb that’s been around for a very long time. It’s one of the more commonly known ingredients, but that doesn’t mean it’s the best.

Why? Because studies have shown that Tribulus Terrestris can potentially cause prostate enlargement, which isn’t a side effect you should risk.

Not only that, Tribulus Terrestris hasn’t even proven to raise your T levels. For this reason, we personally try to avoid this ingredient when choosing a test booster supplement.

D-Aspartic Acid (also known as DAA) is one of the best ingredients you can find in test booster supplements, so Advanced Nutrition Systems have done well here.

Simply put, DAA has proven to raise your T levels when consumed in dosages between 2,000mg-3,000mg. But the problem is, DAA is part of a proprietary blend, so you’re not shown the exact dosage of it in Iso-T Drive.

As the overall dosage of the proprietary blend is 945mg, it’s literally impossible for there to be an optimal dosage of DAA too.

Ultimately, Advanced Nutrition Systems shouldn’t have added every ingredient into a proprietary blend, and they should have dosed DAA much better here.

Avena Sativa is basically oats. The same stuff you make porridge with.

While this has shown to be beneficial for your general health, and can even reduce your cholesterol levels in high amounts (due to being a soluble fiber), there’s nothing to show that it raises your T levels.

For this reason, we’ll consider this as a ‘bonus’ addition to Iso-T Drive, as it’s certainly not necessary here. The worrying thing is, as it’s part of a proprietary blend, it could be filling most of this T-Booster without you knowing.

Personally, we would just rather avoid Tribulus Terrestris to avoid the risk of its side effect altogether. Especially as it doesn’t work, so we don’t feel that there’s any need for Saw Palmetto in test booster supplements.

Not only that, Saw Palmetto has failed to have any effect on testosterone levels in clinical studies. So we consider this to be ineffective too.

Milk Thistle is known for its ability to help improve your liver health. It’s often used while gym goers ‘cycle’ illegal substances as a result.

We believe that Advanced Nutrition Systems have added Milk Thistle to Iso-T Drive, to make people think it’s stronger than it really is.

But in truth, no natural testosterone booster will cause any damage to your organs, which is a good thing. So there’s no need for Milk Thistle in Iso-T Drive either.

Ultimately, we would have preferred to see an effective nutrient, such as Vitamin D3 instead.

Also known as DIM, this is known as an anti-aromatase nutrient; this means it can protect your testosterone levels and stop your estrogen from rising.

Again, DIM is also used by those that ‘cycle’ illegal substances, to attempt to stop those injecting from suffering gynecomastia (man boobs).

However, you won’t be at risk from these side effects with any natural test booster on the market (otherwise they wouldn’t be legal and sold in GNC etc).

For this reason, we consider DIM to be an necessary addition to Iso-T Drive too. 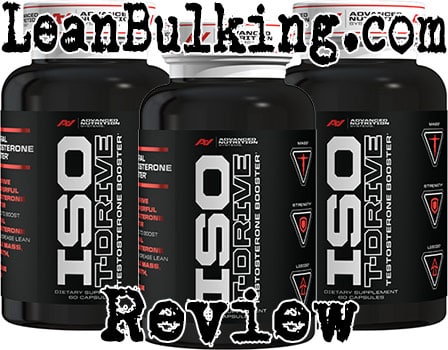 The main problem we have with Iso-T Drive, is that it contains Tribulus Terrestris; we as mentioned, studies have shown this to be capable of causing prostate enlargement, which can lead to serious male health issues.

This risk is increased, due to it being added in Iso-T Drive in unknown amounts (as it’s part of a proprietary blend). So personally, we prefer to avoid supplements containing Tribulus Terrestris and proprietary blends.

Here’s the potential side effects from taking Iso-T Drive:

We probably sound like we’ve been quite harsh in this review of Iso-T Drive. But we simply give our honest opinion by analyzing each ingredient inside this product.

Ultimately, we believe that Iso-T Drive only contains 1 effective nutrient when it comes to raising your testosterone levels – D-Aspartic Acid. What really lets this product down is that it contains Tribulus Terrestris, which can cause negative effects to your prostate.

For this reason, we don’t believe that it’s worth its massive $99.99 price tag, and all of the highest rated T-Boosters on the market cost less than this.

2
Check Out The Best Test Boosters This Year!