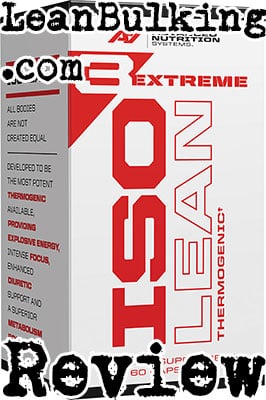 ISO Lean 3 Extreme is a fat burner supplement made by Advanced Nutrition Systems. It costs $69.99 on GNC.com for 60 serving containers; this might sound good at first, but it only offers 1 capsule per serving.

Basically, studies show that 3-4 capsules spread throughout the day is better for keeping your body fuelled in fat burning mode for longer. So we would have preferred 3-4 capsules daily, instead of just the 1.

But we do have some positive first impressions too. We’re especially happy to see that Advanced Nutrition Systems has added Green Tea Extract, which is always a key player in fat burners due to being proven to promote fat loss.

Anyway, we’ll expand on this as we analyze ISO Lean 3 Extreme’s nutrient profile for you in the next section. But first, we’ll tell you more about the company behind it.

Who are Advanced Nutrition Systems?

We like that Advanced Nutrition Systems’ ‘about us’ page was short but concise. It tells you that their products are made under FDA Good Manufacturing Guideline practises, which is something all companies should be doing.

We would have liked to have found out other details, such as the year this company was founded etc. We do know that ANS also produce other highly priced testosterone boosters and fat burners though.

But you’re here to learn more about ISO Lean 3 Extreme, so let’s see which ingredients have been added below…

ISO Lean 3 Extreme has been packed with 15 ingredients, which we personally believe is too many; from past experience, supplements containing over 10 nutrients are usually under-dosed.

Not only that, every ingredient has been added into proprietary blends (we’ll expand on this below).

Proprietary blends are mixtures of numerous ingredients that’re only shown to you as 1 quantity. As you can see from the ‘ISO Metabolic Enhancer | Neuro Focus Blend’ on this fat burner’s ingredients list, the overall amount is 712mg – but you’re not shown the dosages of each ingredient inside such as Caffeine Anhydrous.

This increases your risk of side effects, and also makes it uncertain whether ISO Lean 3 Extreme will work. For this reason, we try to avoid any supplement that contains proprietary blends.

Not knowing the exact dosages of ingredients is definitely a problem; many have low tolerances to Caffeine, so it’s better for them to know exactly how much to consume.

But apart from these negatives, there are some positives. As we’ve mentioned, we’re glad to see that Advanced Nutrition Systems have added Green Tea Extract, which is tried-and-tested to work.

Anyway, we’ll tell you more about this as we take you through each ingredient inside ISO Lean 3 Extreme. By the end of this review, you’ll have a good idea of how safe and effective this fat burner really is. 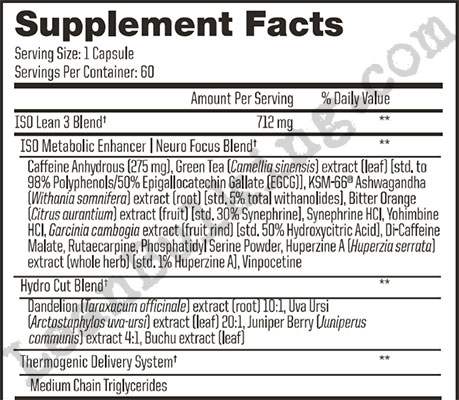 When it comes to raising your energy levels, Caffeine Anhydrous is the best stimulant you can find in supplements. This is because it’s a pure form of Caffeine that’s been dehydrated into powder form, so it can be added to supplements.

But as you know, it’s part of a proprietary blend so you don’t know the exact amount in ISO Lean 3 Extreme; this puts you at risk of jittery side effects, especially if you’re sensitive to Caffeine.

We always advise that you consume under 100mg Caffeine per capsule with fat burner supplements. But there’s simply no knowing how much is contained in ISO Lean 3 Extreme.

Ultimately, this is a great example of why we personally try to avoid supplements containing proprietary blends.

Green Tea Extract is one of the best fat burning ingredients out there; it’s known for being an effective thermogenic that’s proven to work, and everyone knows that it’s good for your general health too.

In fact, studies have shown that Green Tea Extract benefits almost every organ in your body, as well as promoting fat loss. Not bad, eh?

For this reason, we consider Green Tea Extract to be a key addition to any fat burner supplement. But the problem here is that you don’t know the exact dosage in ISO Lean 3 Extreme.

Studies show that Green Tea Extract’s optimal dosage is 500mg per serving, so we recommend making sure fat burners contain this amount in the future.

Ashwagandha is a herb that’s been used in ayurveda (traditional Indian medicine) for decades. It’s been believed to do many things, even being thought to be capable of treating cancer patients.

But recent studies show that it’s main benefit is being able to raise your power output.

While this is a useful benefit, remember that ISO Lean 3 Extreme is a fat burner supplement. The bad news is that Ashwagandha Extract hasn’t proven to promote fat loss, so we don’t consider it to be a necessary addition here – although it’s by no means the worst ingredient in ISO Lean 3 Extreme.

Bitter Orange Extract is definitely one of the worst ingredients in ISO Lean 3 Extreme, in our honest opinion; it’s been commonly reported to cause numerous side effects, which is why we try to avoid products containing it.

However, we will acknowledge that Bitter Orange Extract has shown to promote fat loss in studies, which is why companies add it to their fat burners.

But we don’t believe it’s potential risks of side effects is worth suffering for. Especially when there are safe and effective nutrients available instead, such as Cayenne Pepper Extract.

We mentioned that Bitter Orange Extract was able to cause side effects. Well, Synephrine has shown to cause the same issues.

In fact, Synephrine was once banned from use in certain countries, which was the main reason why Bitter Orange Extract started being added instead (as it offers almost identical effects).

So there’s simply no need to have both Bitter Orange Extract and Synephrine in 1 supplement. And having them both in ISO Lean 3 Extreme raises your risks of side effects, in our honest opinion.

Things are just getting worse and worse here, in our honest opinion. Yohimbine is another controversial addition to ISO Lean 3 Extreme that’s shown to be capable of causing side effects.

But again, we will acknowledge that studies have shown Yohimbine to be effective at promoting fat loss.

Ultimately, we would have preferred to have seen something safer such as Green Coffee Bean Extract instead here.

Now, this is one ingredient that we consider to be an ineffective addition to Iso Lean 3 Extreme, in our honest opinion.

Garcinia Cambogia Extract gained attention in the media for being some kind of ‘miracle’ ingredient for fat loss. But when research was conducted on it, studies showed that it wasn’t capable of helping you lose fat at all.

For this reason, we simply consider this to be ineffective here.

In case you’re wondering, this is Caffeine Anhydrous bound with Malic Acid; as this is also contained in an unknown dosage, it simply increases your risk of suffering jittery side effects even further.

Remember that you’re getting everything in one big hit, due to ISO Lean 3 Extreme only offering 1 capsule servings. So this is another reason why we prefer fat burners that spread out overall dosages between 3-4 servings throughout the day.

Rest of the Ingredients

Let’s be honest, we’ve covered around 10 ingredients, and we’re both starting to get bored. I can hear my wife calling me for dinner, and I’m pretty damn hungry, so I’ll quickly summarise the rest of the ingredients for you here.

There are no key fat burning ingredients in the rest of the pile. The only notable ingredient is Juniper Berry Extract, which can act as a diuretic and reduce water weight.

But remember that a loss in water weight is only temporary, and it’ll come back as soon as you stop taking this fat burner.

So basically, we would have preferred to have seen some ingredients shown to suppress your appetite, such as Glucomannan instead. 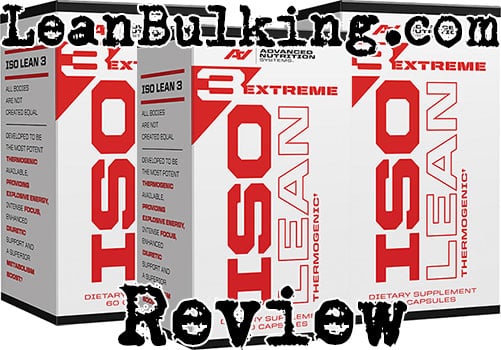 The main issue with ISO Lean 3 Extreme, is that it contains numerous stimulants in a proprietary blend; this is always a recipe for disaster in our honest opinion, putting you at risk from jitters and energy crashes.

Not only that, Yohimbine, Synephrine & Bitter Orange Extract are all ingredients that we would personally prefer to avoid. This is because they’ve all been reported to cause side effects, and it’s simply not worth taking the risk.

Here’s the potential side effects from taking ISO Lean 3 Extreme:

Apologies if we seem very critical of this fat burner. But remember that we’re giving you our honest opinion in this review.

Ultimately, we expected better things from Iso Lean 3 Extreme, as it’s priced to compete against some of the highest rated fat burners on the market. And we personally don’t believe it can beat the other products available at a similar price.

But you can’t ignore the good things about ISO Lean 3 Extreme either; we’re happy that Advanced Nutrition Systems added Green Tea Extract, which is always a key addition to fat burners due to being tried-and-tested at promoting fat loss.

While ISO Lean 3 Extreme might be a respectable product, it can’t compete with the other fat burners on the market at a similar price-range.