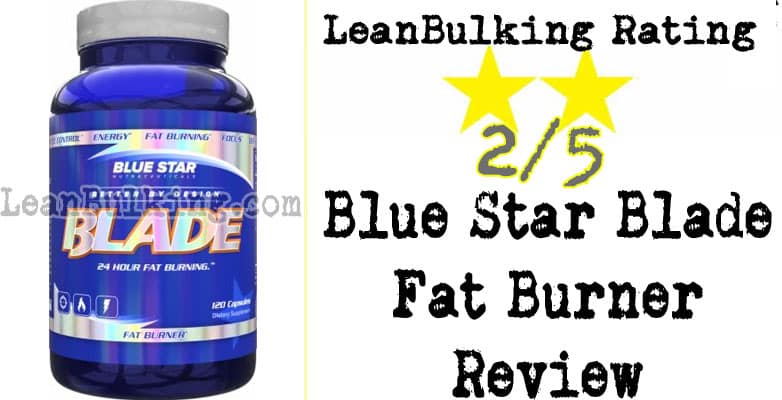 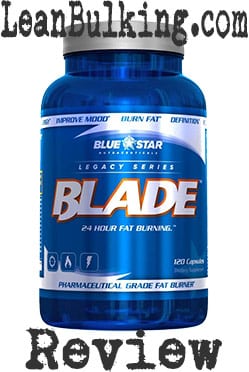 About The Product: Blade Fat Burner

Blade is a fat burner supplement made by Blue Star Nutraceuticals. It costs $69.99 for 60 serving containers on their website, bodybuilding.com & amazon.com, with a serving size of 2 capsules per day (we checked GNC.com, but it wasn’t available there).

This isn’t a great daily serving size; simply put, the best fat burners have a serving size of 3-4 capsules spread throughout your day. This allows your body to always be topped up with key fat burning ingredients.

Ultimately, only consuming 2 capsules per day will only deliver benefits for 2-3 hours of your day; this isn’t great, especially when you could be encouraged to burn fat throughout your whole day with 3-4 capsules.

Anyway, before analyzing the ingredients inside Blade fat burner, we’ll tell you a bit about the company behind it (for those that don’t know).

Who are Blue Star Nutraceuticals?

Blue Star Nutraceuticals is a USA-based supplements company. They market a range of supplements, from pre-workouts to fat burners – but Blade fat burner is one of the most popular in their line-up.

One thing we saw on their website; we like that their products are cGMP certified, meaning they’re created under strict regulations. This is something that you should always look for, as it ensures that you get a consistent product every time, as supplements manufactured outside of the USA or UK don’t always go through equally effective quality control.

However, they talk about being an ‘honest’ company while still adding proprietary blends in their products. This is strange because, in our opinion, we don’t consider proprietary blends to be ‘honest’ due to not being shown the exact dosage of each nutrient inside (we’ll explain what these are, and expand on our point in the next section below).

However, it also contains some ingredients that we avoid; these are Synephrine and Yohimbine, which have caused us side effects such as anxiety and rapid heartbeat in the past.

Not only that, Blade fat burner also contains a proprietary blend. We’ll explain what this is below, and why it’s a bad thing.

Proprietary blends are mixtures of numerous ingredients that are only shown to you as 1 quantity. As you can see from Blade fat burner’s ‘XD Delivery Technology’ on its ingredient list, the overall amount is 61mg (which is a tiny amount) – but you’re not shown the dosages of each ingredient inside such as Black Pepper Extract.

Not only that; 61mg of any ingredient won’t do anything for you – so a mixture of 5 different ingredients in this tiny amount will have no effect on you. This is why Blade fat burner’s ‘XD Delivery Technology’ is a waste of space here.

Anyway, now you know what proprietary blends are (and why they’re bad) – we’ll take you through each ingredient; so you can see how good Blade fat burner really is. 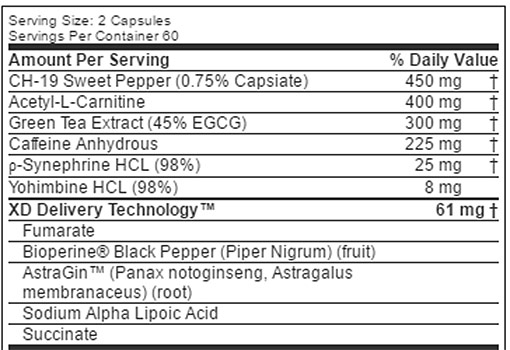 Here’s Everything You Need To Know about Blade Fat Burner:

This is a fancy name for a chili pepper. But this is a good thing, as it’s shown to raise your body temperature and improve your metabolism.

If you’ve ever eaten any spicy foods, then you know how chilies work – we all know that spicy hot wings can make you sweat (especially when they’re covered in ghost chili pepper sauce…).

As a result, your body is able to burn body fat more effectively; it even encourages your body to burn more fat while you’re sat on the couch (but exercising will really help you reach your goals).

For this reason, Chilli Peppers, such as Cayenne, are some of our favorite fat burning ingredients.

We prefer this ingredient in pre-workout supplements, as it offers better benefits to improve your gym session than help you lose fat.

Ultimately, ALCAR isn’t as effective as chili peppers or Green Tea Extract – but it can still be useful in a fat burner supplement.

Green Tea Extract is one of our favorite ingredients you can find in fat burners. It’s proven to promote fat loss in countless studies and even benefits almost every organ in your body.

You get numerous benefits, without any side effects, when consuming green tea – whether it’s in a fat burner or in tea.

For this reason, we always look for fat burners containing this ingredient.

Caffeine can be our favorite ingredient in both fat burners and pre-workout supplements. It can really help raise energy levels when cutting calories, which also helps you perform better in the gym.

However, one thing you need to watch out for is the caffeine dosage in supplements –  basically, consuming too much Caffeine leads to jitters and energy crashes.

For this reason, we prefer fat burners containing under 100mg per capsule; unfortunately, Blade fat burner contains 112.5mg Caffeine per capsule – which increases the risk of you suffering from jitters and energy crashes.

If Blue Star Neutraceuticals split the servings of Blade fat burner into 4 (instead of 2), then there would be no problem with the overall caffeine dosage here.

Synephrine’s also known as Bitter Orange Peel –  it’s been banned in the UK and Canada after causing harmful side effects. In fact, Yohimbine has been banned in both countries for the same reason.

We never recommend that you consume ingredients that have been banned, or can cause side effects. As a result, we try to avoid supplements containing these 2 ingredients.

This is the proprietary blend in Blade fat burner. Its overall quantity is 61mg, which is tiny (basically, no ingredient will be effective in this small dosage – and remember this is a mixture of 5 different ingredients, which makes it even worse).

The only good ingredient in XD Delivery Technology Proprietary Blend is Black Pepper Extract – this has shown to improve the absorption rate of other ingredients, but it won’t do much when consumed with other ineffective ingredients.

Basically, we’re going to show you which ingredients that are safe and proven to actually help you lose your unwanted body fat – without suffering from any side effects.

In all fairness to Blue Star Nutraceuticals, they’ve included one of the best thermogenic nutrients (Green Tea Extract), so we won’t include this below.

However, we’ll list the nutrients that would have raised our ranking of Blade fat burner below: 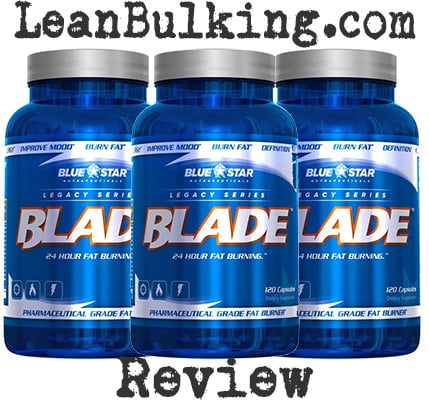 The worst ingredients in Blade fat burner are Synephrine and Yohimbine; these have both been banned in numerous countries after causing side effects. As a result, we recommend avoiding supplements containing these ingredients.

However, that’s not the only issue with Blade fat burner. It also contains 112.5mg of caffeine per capsule serving, which could cause jitters and energy crashes to those with a low tolerance to Caffeine.

For this reason, we prefer fat burners that contain under 100mg Caffeine per capsule; this allows you to benefit from raised energy levels without any risks of side effects.

Ultimately, there’s no point spending money on a supplement if it’s going to cause side effects. We prefer to choose products that are safe and effective, to get the best value for money.

Here are the potential side effects of taking Blade Fat Burner:

If Blade fat burner didn’t contain Synephrine and Yohimbine, then we would’ve given this a much better rating than 2 stars. We prefer to avoid these ingredients and others that can cause side effects in their products, hoping to make it more ‘powerful’.

Simply put, we would happily take a less ‘strong’ fat burner if it meant avoiding side effects and getting better results.

It’s disappointing, as Blade fat burner contains some great fat burning ingredients (such as Green Tea Extract, Sweet [chili] pepper and even Acetyl-L-Carnitine). But as we’ve mentioned, the Synephrine and Yohimbine ruin this product in our honest opinion.

Ultimately, this is a great example of why ‘stronger’ products, aren’t always better; after all, side effects won’t help you get shredded abs.

Blue Star Nutraceuticals have made a mistake by adding a proprietary blend in Blade fat burner, as well as 2 potentially harmful ingredients.

For this reason, we don’t think Blade fat burner can compete with the highest rated fat burners on the market.