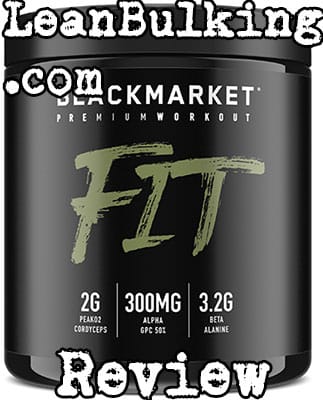 FIT is a pre-workout supplement made by Black Market Labs. It costs $64.99 for 30 serving containers, making it one of the more expensive products on the market.

This sounds like a tasty supplement; FIT Pre Workout comes in 3 flavors, including Fruit Punch, Blue Razz, and Watermelon.

However, while taste can improve the enjoyability of a pre-workout, it’s not what will ‘make or break’ this product here. We’re more interested in seeing whether it contains safe & effective nutrients, or whether it’s more likely to cause side effects than work.

But before that, we’ll tell you more about the company behind FIT Pre-Workout.

Who are Black Market Labs?

Black Market Labs was officially founded in 2009, and we believe that they use their name to assert the assumption that their supplements are the strongest on the market.

However, we’ve reviewed their other pre-workout before, called Fierce Tone, and to be honest, we weren’t very impressed. However, we don’t hold it against a company, so we’re hoping that Black Market Labs can make a good impression with FIT Pre Workout in this review.

Anyway, without wasting any more time, let’s get stuck into the analysis below…

Black Market Labs’ FIT Pre Workout contains 14 ingredients overall; we consider this to be too much, as we usually find that these kinds of products contain under-dosed nutrients.

For this reason, we much prefer it when a company adds less ingredients (under 10 overall), while making sure they’re optimally dosed. This will result in a much better product that’ll be likely to help you reach your fitness goals.

But that’s not all. FIT Pre Workout contains a proprietary blend, which we hate seeing in supplements (we’ll explain what these are below).

Proprietary blends are mixtures of numerous ingredients that’re only shown to you as 1 quantity. As you can see from the ‘Endurance and V02 Max Complex’ blend in this pre-workout’s ingredient list, the overall amount is 5,205mg; however, you’re not shown the dosages of each ingredient inside such as Cordyceps Militaris.

This increases your risk of side effects, and also makes it uncertain whether FIT Pre Workout will actually work –  making it harder to know whether you’re getting good value for money.

For this reason, we try to avoid any supplement that contains proprietary blends.

Right, so now you know why we don’t like when companies add proprietary blends into their supplements. However, we won’t let this ruin this review; we’ll take you through the most important ingredient inside Black Market Labs’ FIT Pre Workout.

By the end of this review, you’ll know whether it’s worth trying out, or simply a waste of money. 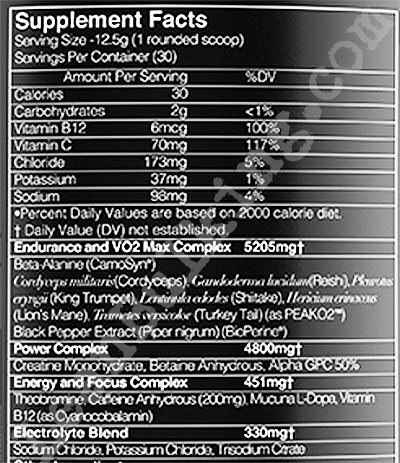 If you’ve already had a look at pre-workout supplements before, then you’ll know why this ingredient is controversial.

If not, then it’s because Beta-Alanine has shown to cause itchy & tingly skin (paresthesia), but it can also enhance your muscular endurance. As a result, people are often at crossroads trying to decide whether the side effect is worth the benefit.

Personally, we are very distracted by paresthesia in the gym, so we prefer not to consume Beta-Alanine. However, we never fully criticize this ingredient, as we know people that don’t mind suffering from itchy & tingly skin while lifting weights.

For this reason, we’ll just acknowledge what Beta-Alanine brings to the table. Ultimately, it’s up to you, to decide whether it’s worth having in a pre-workout supplement.

If you decide to take it, then we recommend choosing a pre-workout containing under 800mg Beta-Alanine; studies have shown that you might be safe from paresthesia under this dosage.

But the problem is, as Beta-Alanine is part of a proprietary blend in FIT Pre Workout – no-one knows the exact dosage of it here.

Cordyceps is a mushroom that’s believed to enhance your endurance levels during exercise. As a result, it’s been utilized in Traditional Chinese Medicine in the past.

However, studies haven’t proven whether it actually works or not (mean it’s very unreliable and might not work). The worrying thing is that Cordyceps is part of the ‘Endurance and V02 Max Complex’ proprietary blend; this means that a potentially ineffective nutrient might be filling the whole blend, which would mean half of this product would be unreliable.

Ultimately, this is a great example of why proprietary blends are something that the supplements industry need to get rid of. The only positive is that Cordyceps hasn’t been reported to cause any side effects.

Also known as Ganoderma Lucidum, this another mushroom that has a history of being used in Traditional Chinese Medicine; it’s believed to reduce your risk of cancer and reduce stress levels, but no study has shown that it’s capable of improving your gym session.

Basically, this means that Reish is an unnecessary addition to Black Market Labs’ FIT Pre Workout. We would have preferred a useful nutrient such as L-Carnitine instead; this has shown to reduce muscular fatigue and damage, while improving your focus in the gym.

Guess what? This is another mushroom…

Don’t get us wrong, we enjoy frying some mushrooms and having it as part of an ‘English Fry-Up’ while we’re visiting the UK. But there’s no need for there to be this many mushrooms in a pre-workout supplement.

Anyway, all you need to know is this; King Trumpet is also known as Pleurotus Eryngii and is a good source of Vitamin D3.

However, 100g of King Trumpet only provides 36IU of Vitamin D3. Considering that you need a daily dosage of 3,332IU-5,000IU to experience raised testosterone levels and improved sporting performance, this mushroom isn’t likely to do much in FIT Pre Workout.

In fact, we don’t believe that Vitamin D3 is even necessary in a pre-workout supplement. It’s one of the best overall nutrients to consume (to boost your test levels), but if you’re looking for this benefit, then you’d be benefited more by taking a testosterone booster supplement.

Don’t get us started with Shiitake mushroom either; when we’ve visited Japan, it’s been very tasty in some soup noodles (ramen). But again, while it’s an excellent source of minerals, it’s not likely to improve your gym session here.

Also known as Yamabushitake, this is another mushroom too…but this one is actually beneficial. In fact, it’s the best of the bunch, because it’s proven to improve your cognition (which will enhance your focus in the gym).

While it’s beneficial and proven to work, we still believe that it’s more suited to a Nootropic supplement; it doesn’t reduce your fatigue or muscle damage, so it’s benefits really are limited to just improving your brain performance.

We believe that Caffeine offers enough boost in focus to benefit you in the gym. But still, we’d take this over the other mushrooms in FIT Pre Workout every time.

Now, this is an ingredient worth talking about. Creatine Monohydrate is one of our favorite pre-workout ingredients, as it’s proven to boost your strength and endurance in the gym.

Ultimately, these are key benefits that will help you achieve your fitness goals faster.

And you can’t argue with it; after all, Olympic athletes in the 1980’s used creatine to enhance their performance (and since then, creatine has been disallowed from use by professionals, as it’s so effective).

The only problem here, is that Black Market Labs have included Creatine Monohydrate in another proprietary blend; this means that you don’t know whether it’s been optimally dosed to work.

Again, this highlights the problem with proprietary blends.

From good to bad…we try to avoid Betaine, as it’s known for causing your breath and sweat to smell fishy – not something you want, right?

Well, personally, we don’t want to smell like salmon in the gym. But the choice is yours.

Anyway, the worst part is that no study has shown whether Betaine actually delivers any benefits; this means that it’s likely to be a useless ingredient that causes a side effect.

We don’t want to sound too negative, but there really isn’t any positives about Betaine. Not only that, as it’s part of a proprietary blend, your risk of smelling fishy in the gym is increased.

Otherwise known as Alpha-Glycerophosphocholine, you can see why it’s commonly shorted to ‘Alpha-GPC’. Anyway, this is another brain boosting ingredient that’s shown to enhance your cognition.

But as we mentioned with Lion’s Mane Mushroom, Alpha-GPC is also better suited to a Nootropic supplement. However, we can’t recommend you to consume this ingredient, as it’s been reported to cause numerous side effects (we’ll expand on this in the side effects section later in this review).

If you’re wondering what this is, Theobromine is a stimulant that’s naturally found in cocoa beans; it’s why you might experience a slight ‘buzz’ after eating chocolate (along with the potential high sugar consumption too).

However, we believe that the best stimulant to have in a supplement is Caffeine Anhydrous; everyone knows that it’s the safest and most reliable stimulant available, so there’s no need for any other stimulant.

But the worst part is that having 2 stimulants in 1 supplement increases your risk of suffering from jitters and energy crashes. For this reason, we always advise you to choose a pre-workout that contains less than 200mg overall caffeine per serving – to stay safe from side effects. 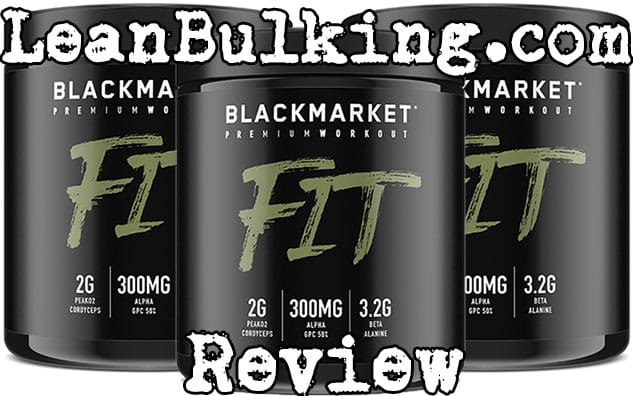 See Your Best Options In Our
– Highest Rated Pre-Workouts Page –

There are 3 things in Black Market Labs’ FIT Pre Workout that can cause side effects; Beta-Alanine, Betaine Anhydrous and the overload of stimulants inside.

In a quick summary, Beta-Alanine has shown to cause your skin to itch and tingle (this is officially called paresthesia), Betaine Anhydrous is known for causing your breath and sweat to smell fishy (offiically known as trimethylaminuria).

Also, as we mentioned before, as FIT Pre Workout contains 2 stimulants; you’re at risk of suffering from jittery feelings and energy crashes, which would cut your gym session short and slow down your progress.

Here’s the potential side effects from taking FIT Pre Workout:

We probably sound like we’ve seriously criticized this product in this review. However, we’ve given you the reasons why behind it; ultimately, we created LeanBulking.com to expose the truth about supplements, and tell you whether a product is likely to work or not.

So apologies if we’ve offended anyone, but we’ve done our best to justify why. For any haters from anyone associated; you could comment negative things on this review, or you could go and improve your formula and receive a better review in the future. And remember it’s nothing personal, we just review supplements…

Anyway, we’re mostly disappointed with the lack of key pre-workout ingredients in FIT Pre Workout. We would have preferred to see nutrient such as L-Carnitine, which has shown to reduce fatigue and muscle damage, while strengthening your mind-muscle-connection in the gym.

But if this product didn’t contain any proprietary blends, then we would have increased it’s rating by at least 1 star; you can’t ignore the positives, as this also contains great ingredients such as Creatine Monohydrate, Lion’s Mane Mushroom and Caffeine Anhydrous.

However, if there’s anything to learn, then FIT Pre Workout is a great example of why companies need to stop adding proprietary blends in their products

FIT Pre Workout is missing key ingredients, while it contains some that have been commonly reported to cause side effects.

The fact that these ingredients are part of proprietary blends simply increases your risk of suffering from these side effects.

For these reasons, we believe that you’d be better looking elsewhere.