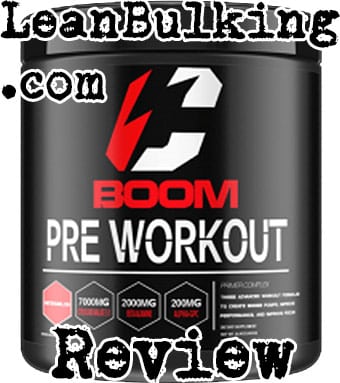 Boom Pre Workout is made by Castleberry Nutrition. It costs $34.95 for 30 servings, with a serving size of 15.5g scoop.

From first glance, Boom Pre Workout seems like a good product; it doesn’t contain any proprietary blends, and includes an optimal dosage of Citrulline Malate.

However, once you look deeper into the nutrient profile of Boom Pre Workout, you start to see some negatives. One thing that we especially don’t like, is that Castleberry Nutrition has added Synephrine, which has been banned from use in certain countries such as the UK & Canada.

Anyway, we’ll explain this and more in the next section, where we’ll analyze Boom Pre Workout’s ingredients for you. But first, let’s find out more about the company behind it.

Who are Castleberry Nutrition

In case you’re unaware, Castleberry Nutrition was founded by Instagram fitness star, Brad Castleberry. You’ve probably heard of him, and he’s been involved in controversial debates whether he lifts real or ‘fake’ weights.

As well as marketing supplements, Castleberry Nutrition also sells a range of clothing on its website.

From what we can see, this company was set-up in 2017, so it’s very fresh on the market. So it’ll be interesting to see whether Boom Pre Workout can compete with the already established products available.

As we mentioned at the start, we’re glad that Castleberry Nutrition has added an optimal dosage of Citrulline Malate, and even Beta-Alanine.

However, one thing that we don’t like about Boom Pre Workout from first impression, is that it contains the potenially harmful, Synephrine.

Not only that, Boom Pre Workout contains 4 stimulants in a proprietary blend (we’ll expand on this below).

Proprietary blends are mixtures of numerous ingredients that’re only shown to you as 1 quantity. As you can see from the ‘Energy Matrix’ on Boom Pre Workout’s ingredient list, the overall amount is 2,370mg – but you’re not shown the dosages of each ingredient inside such as Caffeine.

As this ‘Energy Matrix’ is filled with 4 stimulants, your risk of suffering jittery side effects is seriously increased. For this reason, we try to avoid any supplement that contains proprietary blends.

Anyway, we’ll take you through each ingredient in Boom Pre Workout. By the end of this review, you’ll know exactly how safe and effective this pre-workout supplement really is. 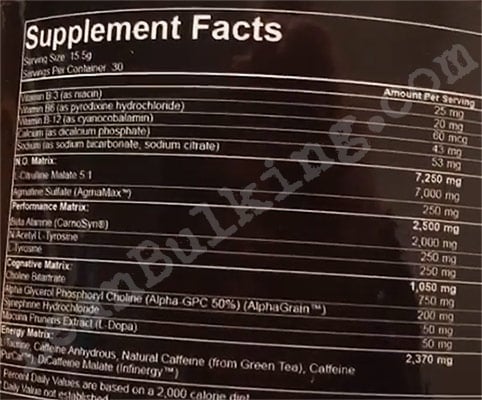 Citrulline Malate is one of the best ingredients you can find in pre-workout supplements; it’s able to increase your nitric oxide levels, which results in improved blood flow and muscle pumps in the gym.

Ultimately, this will help you feel invincible in the gym, and the increased blood flow enhances your muscular endurance and reduces fatigue too.

For this reason, Citrulline Malate is the best ingredient in Boom Pre Workout. Great start here.

Agmatine is a compound found in L-Arginine that’s believed to raise your nitric oxide levels.

However, due to L-Arginine having a poor absorption rate, studies have shown that Agmatine Sulfate doesn’t deliver reliable results.

Ultimately, this isn’t a great option to add to a pre workout, and there’s no need for it due to an optimal dosage of Citrulline Malate being included already.

Beta-Alanine is always a controversial addition to any pre workout, as it’s shown to enhance your muscular endurance. But it also causes itchy and tingly skin.

This is a side effect that affects people differently, so we’ll leave it up to personal preference. But personally, we try to avoid Beta-Alanine, as we find its side effect very distracting when trying to focus on lifting weights in the gym.

For this reason, we prefer Creatine Monohydrate in pre workouts; it offers the same benefit, without causing any side effects.

We’ve grouped these 2 nutrients together, as they’re basically the same – just slightly different variants of the same compound.

L-Tyrosine is a ‘brain booster’ that’s able to improve your cognition; this is why it’s often added into nootropic supplements.

It can be useful in pre workouts, as an increase in focus can strengthen your mind-muscle-connection to help you make the most of every rep.

However, Caffeine offers enough of a raise in focus to deliver this benefit anyway. And as Boom Pre Workout contains Caffeine Anhydrous, L-Tyrosine isn’t essential here.

So far, the majority of ingredients in Boom Pre Workout have been great. However, Choline is one of the worst ingredients you can find in any supplement.

Here’s why; studies have shown that Choline isn’t able to deliver any useful benefits to improve your gym session. But it’s known to cause your breath and sweat to smell fishy.

Ultimately, this side effect isn’t worth suffering as you’re not getting anything in return. For this reason, we try to avoid supplements containing Choline Bitartrate.

Alpha-GPC is similar to L-Tyrosine, as it’s also known to improve your cognition.

However, the bad news is that Alpha-GPC has also been commonly reported to cause side effects. As it’s not able to deliver any key benefits to improve your gym sessions, we don’t believe that consuming Alpha-GPC in pre-workouts is worth the risk.

We mentioned that Choline is one of the worst additions to Boom Pre Workout. However, Synephrine is the #1 worst ingredient in this supplement.

Why? Because it’s been banned in numerous countries (such as the UK & Canada), after causing harmful side effects consistently.

Not only that, Synephrine isn’t even needed in pre-workout supplements; it’s main benefit is promoting fat loss, so if anything, it’s suited to a fat burner supplement – but even then there are many better fat burning nutrients that are safer and more effective than Synephrine.

For this reason, we advise you to try and avoid supplements containing Synephrine.

We’re not sure why they’ve added Mucuna Pruriens here; the main benefit that Mucuna Pruriens delivers is being able to raise your L-Dpoa levels, which results in your body naturally producing more human growth hormone (which is great for helping you make gains).

However, there’s only a tiny 50mg dosage in Boom Pre Workout; studies show that it’s better to consume this in 3-4 separate 300-500mg servings throughout the day – instead of just 1 serving with pre-workout supplements.

However, the good news is that Mucuna Pruriens doesn’t cause any side effects, so there’s no harm in this being in Boom Pre Workout.

Towards the start of this review, we mentioned that Boom Pre Workout contained a proprietary blend. Well, here it is…it’s called ‘Energy Matrix’ and contains 5 ingredients, with 4 of them being stimulants.

As you’re not shown the exact dosage of each stimulant inside this blend, you’re at serious risk of suffering from jittery side effects here; if you’ve ever consumed too much coffee before, then you’ll know the feeling.

For this reason, companies should list the exact dosages of stimulants in their supplements – to keep you safe from side effects.

Ultimately, the total amount in this ‘Energy Maxtrix’ is 2,370mg, and considering the ingredients inside are mostly stimulants, we personally wouldn’t risk consuming this. 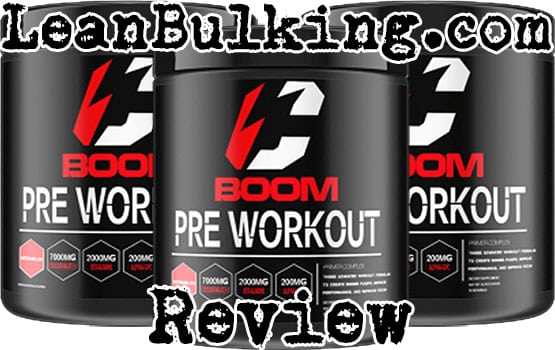 In case you skimmed past the previous section, we’ll give you a quick overview below…

Beta-Alanine causes itchy & tingly skin, Choline causes your breath & sweat to smell fishy, Synephrine has been banned from countries after causing harmful side effects, and the crazy amount of stimulants is likely to cause jittery side effects here.

Here’s the potential side effects from taking Boom Pre Workout:

Boom Pre Workout contains some great ingredients in optimal dosages – especially Citrulline Malate, which will make you feel amazing in the gym.

However, the problem is that Boom Pre Workout also contains potentially harmful nutrients such as Synephrine, along with a crazy amount of stimulants in unknown quantities (which can cause jittery side effects).

Ultimately, if someone told you to consume an unknown amount of stimulants, your reaction should be ‘no’. You should always know the exact dosage of caffeine you’re consuming to stay safe.

The potentially harmful nutrients in Boom Pre Workout let down what could have been a great product.

Still, it’s 3 star rating is very respectable, but it can’t compete with the best pre-workouts on the market.