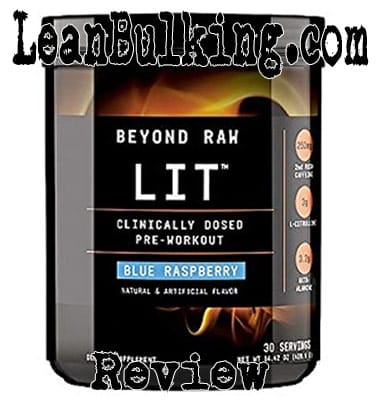 LIT is a pre-workout supplement made by Beyond Raw Labs. It costs $39.99 for 30 serving containers, and comes in 4 flavors - Blue Raspberry Fruit Punch, Gummy Worm, and Icy Fireworks.

That last flavor sounds pretty interesting, but we played it safe and went for Gummy Worm (because who doesnt like gummy worms?! Dont trust anyone who doesnt…). Anyway, well tell you a bit about the company behind LIT pre-workout before analyzing whats inside this product.

Who are Beyond Raw Labs?

Beyond Raw Labs is a supplements company that claim theyre obsessed with results. They market a few other products - such as a mass gainer protein powder, and a fat burner supplement.

However, youre here to learn about their pre-workout, LIT; and this is exactly what well give you below.

LIT pre-workout contains 8 ingredients, which is a good amount to have in a supplement - however, well analyze whether these ingredients are effective, or can cause side effects.

From first glance, we noticed that LIT doesnt contain any proprietary blends, which is a great thing; so well take you through each ingredient inside LIT - to show you how good this pre-workout really is. 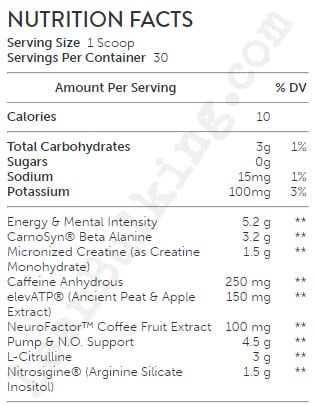 We always have mixed opinions when it comes to Beta Alanine. Simply put, this ingredient has shown to raise muscular endurance - but its also proven to cause a side effect called Paresthesia.

Basically, this side effect is a tingling on the skin of your face and body; something distracting enough to ruin your workout. We were itchying all through our session when experiencing paresthesia - its not great looking like you gave nits or fleas while trying to make gains…

Its up to you whether this is a bad enough side effect to avoid Beta Alanine, but we stay away from it; especially when Creatine Monohydrate offers the same benefit without causing any side effects (well expand on this below).

As we mentioned above, Creatine Monohydrate is one of our favorite pre-workout ingredients for one reason - it works. In fact, Creatine has been used by bodybuilders and athletes since the 1980s; Olympic athletics were known to use it during the 1992 Barcelona Olympic games in particular.

Anyway, most importantly, its proven to improve your strength and endurance in the gym; ultimately, this helps you break your personal weight lifting records, make more muscle gains, or get shredded - which is why we train in the gym right?!

For these reasons, we always look for pre-workout supplements containing Creatine Monohydrate.

Caffeine is the best stimulant you can find in gym supplements - if youve consumed tea or coffee before, you know that Caffeine has a positive impact on your energy levels almost immediately.

Anyway, this is why its great in pre-workout supplements; this instant energy boosts help you perform at your best in the gym, which always helps you make more progress on your dream physique.

As well as raising your energy levels, studies have proven that Caffeine also raises your focus, endurance and strength levels too. For these reasons, Caffeine plays an important role in pre-workouts - just make sure that youre consuming less than 200mg per serving to avoid side effects.

This is where the problems start; as Beyond Raw LIT contains 250mg Caffeine per serving, youre at risk of suffering from jitters and energy crashes here.

This is a patented ingredient made up of Ancient Peat and Apple Extract. If youre not sure what these are, all you need to know is that they havent shown to improve your performance in the gym, in any studies.

As a result, elavATP is an ineffective ingredient inside BEYOND RAW LIT. We wouldve preferred to see Beetroot Extract instead here (as this has shown to promote muscle pumps in the gym due to containing high amounts of nitrates).

This is an interesting addition to Beyond Raw LIT pre-workout, but not a good one. Basically, this is a stimulant that offers the same effects as caffeine; but as weve mentioned, this product already contains high amounts of Caffeine per serving - with Coffee Fruit Exract in the mix, this makes it almost certain that youll experience jitters or energy crashes after taking this pre-workout.

This is part of one of our favorite pre-workout ingredients, Citrulline Malate (the latter is basically L-Citrulline mixed with Malic Acid which has proven to raise your strength levels too). As this is just L-Citrulline, itll only boost your muscle pumps, but this is still a key benefit of taking these supplements.

For this reason, we always like seeing L-Citrulline or Citrulline Malate on pre-workout ingredient lists - who doesnt like seeing their biceps expand in the gym?!.

If you dont know what this ingredient is, all you need to know is that Arginine Silicate Inositol hasnt shown to improve your gym sessions in any studies.

Simply put, any ingredient (or supplement) containing Arginine is ineffective; Arginine has a poor absorption rate, meaning it wont work when orally supplemented. For this reason, we avoid this nutrient.

Not only that, Citrulline converts into Arginine inside your kidneys; this resolves the issue of Arginines poor absorption rate - also meaning theres no need for this inside Beyond Raw LIT pre-workout. 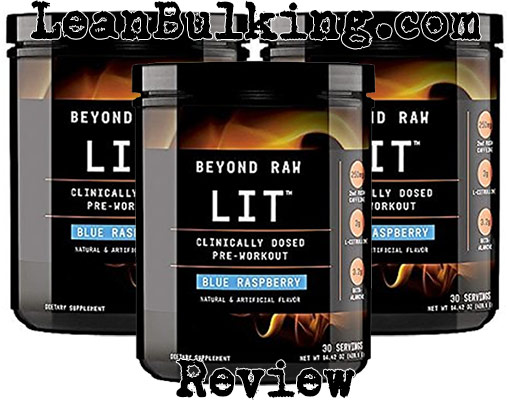 There are 2 things in Beyond Raw LIT that can cause side effects - the high dosage of Caffeine, and Beta Alanine.

As weve mentioned in the above section, the high 250mg Caffeine per serving along with the addition of Coffee Fruit Extract can cause jitters and energy crashes - especially to those sensitive to it. Also, Beta Alanine has proven to cause paresthesia in numerous studies (which is the tingling on the skin of your face and body - something we always try to avoid).

Heres the potential side effects from taking Beyond Raw LIT:

Beyond Raw LIT contains 3 key pre-workout ingredients, which is more than other pre-workouts weve reviewed - but its still not able to compete with our favorite products on the market, as its been reported to cause some side effects.

Well give it credit where its due; its Gummy Worm flavor tasted good, but at the end of the day, you dont buy a supplement simply because it tastes nice.

Ultimately, when youre paying almost $40 for supplements, you want to make sure youre not going to suffer any side effects - to get the best bang for your buck.

For this reason, we cant recommend Beyond Raw LIT to you, but as weve mentioned, its certainly not the worst pre-workout weve seen on the market.

3
Check Out The Best Pre-Workouts This Year!