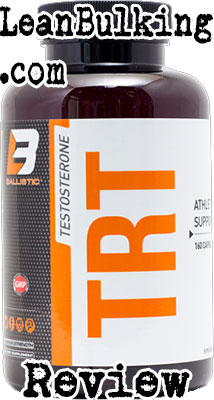 TRT is a testosterone booster made by Ballistic Labs. It one of the more expensive products on the market, priced at $79.99 for 40 serving containers.

We like that Ballistic Labs have provided a serving size of 4 capsules per day; studies have shown that this is the optimal dosage, which is great (and many companies still offer 1-2 capsule servings for some reason…)

After looking on Ballistic Labs about page on their website, we didnt find out much. They claim to deliver the highest quality formulations and create their products in cGMP certified facilities which is great.

However, we didnt learn which year they were founded or any really important details. Saying that, none of this impacts the quality of their products.

Due to the prices of their supplements, we believe that this company markets itself as a premium company. So lets see whether TRT test booster can justify its big price tag.

TRT test booster contains 10 nutrients overall. This is on the border of what we consider acceptable, as most supplements that contain over 10 nutrients are under-dosed.

For this reason, well be keeping a close eye on the dosages of each ingredient inside TRT test booster.

From first glance, we like that Ballistic Labs havent hidden any nutrients in proprietary blends; this means you can see the exact dosage of each ingredient inside.

However, while TRT test booster contains some great ingredients such as Fenugreek Seed Extract & Mucuna Pruriens, its missing other key T-Boosting nutrients such as Vitamin D3 (which we consider to be the best nutrient at raising your test levels).

Anyway, well take you through each ingredient inside TRT test booster. By the end of this review, youll know exactly how safe and effective this supplement really is. 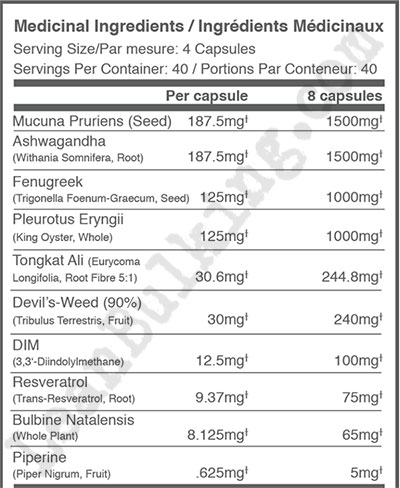 Also known as Velvet Bean, this contains high amounts of L-DOPA, which has shown to improve your sperm quality and raise your testosterone levels - as well as decreasing your stress levels.

However, the bad new is that studies have shown you need at least 300mg Mucuna Pruriens for it to actually work. As TRT test booster only contains 187.5mg, its not guaranteed to deliver its benefits here.

We mentioned at the start that supplements containing 10 ingredients or more are usually under-dosed. Well, were worried that this is the problem with TRT test booster.

Ashwagandha has been used in ayurvedic (Traditional Indian Medicine) for a very long time. Its known for reducing anxiety and is believed to improve your strength.

Well, the good news is that some studies have shown improvements in power output in sprinters. This means that its likely to help improve your strength in the gym too, when dosed correctly.

Studies have proven that you need between 300mg-500mg for Ashwagandha to work, meaning its been under-dosed here.

Fenugreek Seed Extract is one of the best nutrients you can find in testosterone boosters.

Basically, its proven to raise both your test levels and libido - making it a perfect addition to these supplements.

Also, its shown to work in dosages as little as 50mg, so its almost impossible to under-dose. For this reason Ballistic Labs have managed to dose Fenugreek Seed Extract optimally at 125mg here.

In case you dont know, this is an edible mushroom thats found in Asia, Europe, North Africa and the Middle East.

Its also known as King Oyster Mushroom, as is used in a variety of culinary dishes around the world.

While its believed that Pleurotus Eryngii might raise testosterone levels, there isnt enough evidence available. As a result, we consider this to be an unreliable ingredient inside TRT Test Booster.

Also known as Eurycoma Longifolia, we have mixed opinions about this herb.

Why? Because Tongkat Ali has shown to raise your libido, which is a great benefit. But it has no effect on your testosterone levels.

Ultimately, you buy a testosterone booster supplement to raise your T. Thats the bottom line, and you mainly want ingredients to get the job done.

For this reason, while Tongkat Ali is better than King Oyster Mushroom, we would have preferred to see Vitamin D3 here instead.

Its shown to raise your libido, but it comes with the risk of a worrying side effect; raising your prostate weight.

Personally, wed prefer to stay away from this side effect, as it can lead to serious male health issues in the future. For this reason, we dont advise you to choose test boosters that contain this ingredient.

Were actually quite impressed that Ballistic Labs has dosed DIM well; many over-dose DIM as its easy to do.

Basically, studies have shown that DIM can prevent your test levels from converting into estrogen in small dosages (under 100mg). However, this benefit isnt needed in any natural test booster, as they dont put you at risk of this side effect,

Remember that only anabolic steroids put you at risk from raised estrogen levels; companies add DIM as a gimmick, to fool you into thinking their test booster is equally as strong as steroids.

But heres just no need for DIM. But on the bright side, its not going to cause any side effects, as Ballistic Labs hasnt over-dosed this nutrient.

Ultimately, we would have preferred Vitamin D3 instead; this is actually considered to be a hormone, and is the most reliable nutrient at raising your testosterone levels.

If youve heard the myth that red wine helps you live longer, its because it contains Resveratrol.

Its a molecule thats been believed to promote a longer lifespan, but no study has been able to prove this. It was probably a gimmick the wine industry came up with, to help the sell more red wine…

The bottom line is that Resveratrol might improve your general health, but it has no effect on your lifespan. More importantly, it hasnt shown to raise your test levels - making it an ineffective addition to TRT Test Booster here.

Native to South and South-Eastern Africa, this herb is believed to be effective at raising your testosterone levels.

However, its worth noting that theres only been studies conducted on rats, not humans. For this reason, we always take this with a pinch of salt.

But if we were to believe the studies with rats, we would be worried; the same studies show that Bulbine Natalensis can damage your organ function, which is never a good thing.

As a result, we advise you to avoid supplements containing Bulbine Natalensis.

We dont understand why companies add potentially harmful nutrients, when safe and effective nutrients such as Vitamin D3 are available.

You might know this under a more common name; Black Pepper Extract.

Yes, thats right. Its the same stuff that you sprinkle on your food to enhance its taste - but its more beneficial than you think.

Simply put, studies have proven that Black Pepper Extract can improve your digestion and the absorption rate of supplements its added to.

For this reason, we consider this to be a good bonus ingredient. But ultimately, it has no effect on your testosterone levels, so its not really needed either. 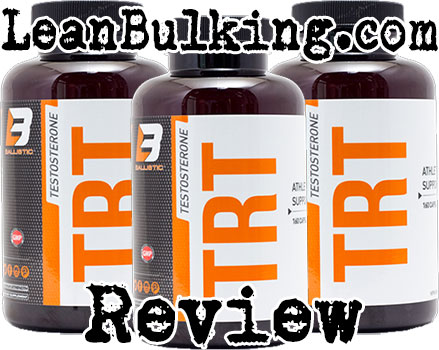 There are 2 ingredients that have been reported to cause side effects in TRT Test Booster; Tribulus Terrestris and Bulbine Natalensis.

In case you skimmed past the ingredients section above, well give you a quick summary.

Basically, Tribulus Terrestris is known for increasing your prostate weight (which can lead to serious male health issues), and Bulbine Natalensis can damage your organ function.

Heres the potential side effects from taking TRT Test Booster:

To be honest, the potential side effects of TRT Test Booster we enough for us to avoid this supplement. Theres no point spending money on a product that might cause you harm.

Saying that, TRT Test Booster isnt the worst product weve seen. In fact, its much better than many weve seen on the market.

However, it doesnt contain the necessary ingredients or dosages to compete with the best testosterone boosters available. Especially as it costs more than them at $79.99.

TRT Test Booster is mostly under-dosed and we dont believe it justifies its massive $79.99 price tag.

It costs more than the highest rated T-Boosters on the market, but cant compete with them.