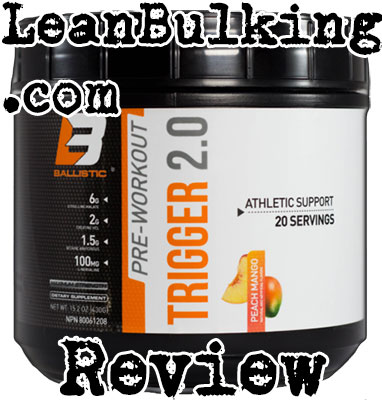 Trigger 2.0 is a pre-workout made by Ballistic Labs. It costs $64.99 for 20 serving containers, making it one of the most expensive options on the market.

But first, let’s find out more about Ballistic Labs.

On their website, we didn’t find out much about Ballistic Labs. The ‘about us’ section only included their ‘mission’, which is to ‘provide the highest quality products possible’.

We would have liked to have found out the year Ballistic Labs were founded, but it’s not too much of a problem. They sponsor some athletes, although they’re not big names in the industry.

Anyway, let’s get into this review and see which ingredients are inside Trigger 2.0.

From first impression, we were quite overwhelmed by the number of ingredients inside Trigger 2.0; there’s over 20 ingredient sinside this pre-workout, which isn’t always a good thing.

Quality is better than quantity, and supplements containing over 10 nutrients usually are under-dosed. But that didn’t seem to be the case here.

We were impressed by seeing an optimal dosage of Citrulline Malate in Trigger 2.0. This is something many companies fail to do, so this alone makes it worth reviewing here.

Other great additions are Creatine and Caffeine Anhydrous, along with L-Theanine (although they haven’t dosed the latter correctly).

But one problem is that Ballistic Labs have added Bitter Orange Extract, which is known for causing numerous side effects.

So we’ll take a more detailed look into Trigger 2.0’s nutrient profile, to show you how safe and effective it really is. We’ll only be looking at the most important nutrients, otherwise we’d both be here all day… 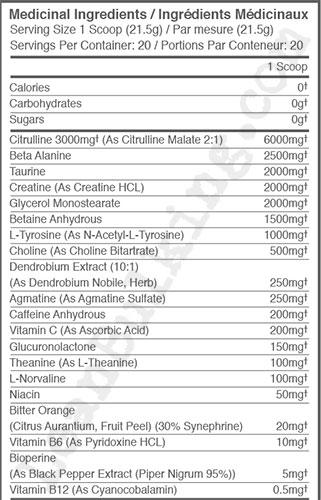 Citrulline Malate is one of the best ingredients you can find in pre-workouts.

It’s able to raise your nitric oxide levels, increasing your blood flow – which directly enhances your muscle pumps in the gym.

However, it’s important to know that Citrulline Malate only works in dosages of 6,000mg and above. The good news is that Ballistic Labs have added this amount into Trigger 2.0.

Beta-Alanine is quite a controversial ingredient in pre-workout supplements; while it can improve your muscular endurance, it’s also shown to cause paresthesia (itchy and tingly skin).

For this reason, we leave it up to personal preference, whether Beta-Alanine is a good or bad thing. Personally, we don’t like the side effect it causes, so we try to avoid supplements containing this nutrient.

Many believe that Taurine is able to boost your energy levels due to it being contained in energy drinks, but this isn’t the case.

However, that doesn’t mean that Taurine is useless; it’s shown to help reduce cramping during exercise.

Saying that, it’s not really going to help improve your performance in the gym. And you can achieve the same benefit by keeping yourself hydrated anyway.

For this reason, we consider Taurine to be a great ‘bonus’ addition to any pre-workout supplement. But it certainly isn’t a key ingredient.

Any form of creatine has shown to boost your strength and endurance in the gym. So it’s no wonder why it’s one of the most commonly consumed compounds in the bodybuilding industry, alongside protein powders.

There’s many arguments about which form of creatine is the most beneficial, but studies have shown there’s no ‘best’ form.

Personally, we would choose Creatine Monohydrate, as it’s been around for the a very long time and is proven to work. But there’s also nothing wrong with Creatine Hydrochloride here either.

In case you don’t know, L-Tyrosine is a ‘brain booster’ ingredient that’s known for improving your cognition; this makes it a great addition to any nootropic supplement.

However, you don’t really need enhanced memory while lifting weights in the gym (unless you always forget your wife’s grocery shopping list…)

Anyway, Caffeine offers enough improvements to your focus to benefit your workout. So while L-Tyrosine is a useful ‘bonus’ to have in Trigger 2.0, it’s not a key addition here.

Now, Choline is another controversial ingredient, as it’s actually not shown to deliver any benefits in studies. But it causes your breath and sweat to smelly fishy.

Personally, we don’t like smelling like a salmon while pumping iron, so we try to avoid supplements containing Choline. And as it doesn’t offer any benefits, we suggest you do too.

Agmatine Sulfate is extracted from L-Arginine, but this isn’t a good thing; L-Arginine has a poor absorption rate, so anything extracted from it will be too (meaning it’s mostly ineffective when orally supplemented).

So why is it added in Trigger 2.0? Well, Agmatine Sulfate is believed to raise your nitric oxide levels and enhance your muscle pumps, but studies have shown it doesn’t work.

For this reason, we consider this to be an ineffective ingredient in Trigger 2.0.

If you’re wondering what ‘anhydrous’ means, it’s basically Caffeine that’s been dehydrated into powder form, so it can be added into supplements.

Caffeine is the best stimulant you can find in supplements, as it’s proven to be safe and effective; after all, everyone consumes this through tea or coffee on a daily basis.

However, if you’ve ever consumed too much coffee before, you’ll know that it can cause jitters and energy crashes.

The good news is that Trigger 2.0 contains a good amount of Caffeine; we always recommend you to consume a maximum of 200mg Caffeine per serving.

L-Theanine is a great addition to any pre-workout supplement, as it forms a ‘smart-caffeine’ when dosed properly.

For this reason, L-Theanine might not be very effective in Trigger 2.0. But saying that, it’s not going to cause side effects either.

Bitter Orange Extract is the worst ingredient in Trigger 2.0 by far.

Why? Because it’s been reported to cause numerous side effects.

In fact, Bitter Orange Extract contains high amounts of Synephrine, which has been banned from use everywhere (including the USA and UK).

Basically, Bitter Orange Extract passes through a legal loophole, so companies are able to add this into their supplements. But it’s only a matter of time before it gets banned.

For this reason, we advise you to avoid supplements containing Bitter Orange Extract. 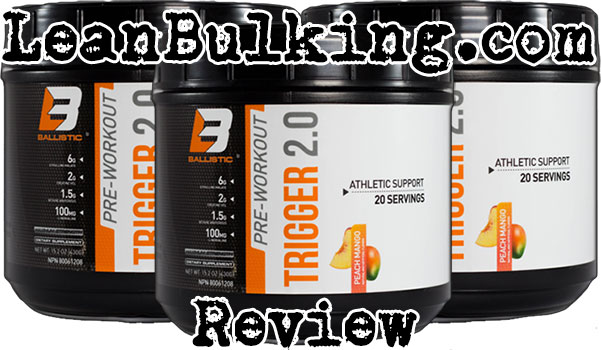 The main concern is that Trigger 2.0 contains Bitter Orange Extract; this is known for causing numerous side effects, so we advise you to avoid this ingredient.

But Beta-Alanine and Choline are 2 other ingredients that cause less serious side effects. These are itchy & tingly skin, as well as a fishy smell in your breath and sweat.

Here’s the potential side effects from taking Trigger 2.0:

Trigger 2.0 is one of the few products that contains over 10 nutrients, as well as good dosages of ingredients.

However, it’s a shame that Ballistic Labs have added Bitter Orange Extract; it’s for this reason, that we can’t recommend this pre-workout to you.

Ultimately, this is a great example of how small mistakes can ruin a whole product. It’s not worth suffering from side effects when you’ve paid good money for a supplement that’s supposed to improve your performance.

While Trigger 2.0 does contain some key ingredients in optimal dosages, it’s also likely to cause side effects (in our honest opinion).

For this reason, we don’t think it can compete with the highest rated pre-workouts on the market.