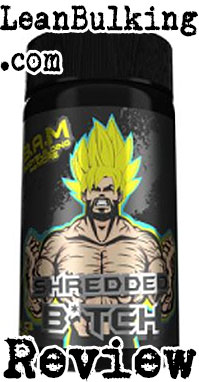 We prefer serving sizes of 3-4 capsules daily; this has shown to be optimal in studies, as it keeps your body topped up throughout the day, instead of just 3-4 hours of your day.

Anyway, well try and find out more about B.A.M, before analyzing B.A.M Shredded Bitchs nutrient profile in the next section.

As weve mentioned, this stands for Bodybuilding And More. Its a German supplements company based in Dresden, but we couldnt find out much more than that (their website wasnt working at the time of writing this review).

Anyway, this doesnt affect the quality of the product, and youre here to learn about B.A.M Shredded Bitch anyway. So lets see which ingredients have been added inside this fat burner below…

B.A.M Shredded Bitch contains 8 ingredients overall, which is a good amount to have in a fat burner; we always find that products containing over 10 ingredients have been under-dosed.

Our first impressions are quite mixed, as B.A.M Shredded Bitch contains some great nutrients such as Caffeine and Green Tea Extract. However, you cant ignore that it also contains some potentially harmful ingredients such as Bitter Orange Extract.

Not only that, every ingredient inside B.A.M Shredded Bitch is part of a proprietary blend (well explain what these are below).

Proprietary blends are mixtures of numerous ingredients thatre only shown to you as 1 quantity. As you can see from the Shredded Bitch Blend on its ingredient list, the overall amount is 1,405mg - but youre not shown the dosages of each ingredient inside such as Caffeine.

Anyway, now that you know why we dont like proprietary blends, well take you through each ingredient inside. By the end of this review, youll know how safe and effective B.A.M Shredded Bitch really is.

L-Tyrosine is a brain booster thats able to enhance your cognition. For this reason, we consider it to be a key addition to any nootropic supplement.

However, its not really necessary in a fat burner, as it doesnt promote fat loss.

Saying that, it can be a good bonus to have in a supplement. So theres no negatives to having L-Tyrosine inside B.A.M Shredded Bitch.

If youre wondering what anhydrous means; it basically means that Caffeine has been dehydrated into powder form, so it can be added into supplements like B.A.M Shredded Bitch.

We briefly mentioned that its not a good idea to add Caffeine Anhydrous into a proprietary blend; this is because youre not shown the exact dosage of Caffeine, which puts you at risk from jittery side effects.

As a general rule, we advise that you consume under 100mg Caffeine per capsule with fat burner supplements. The problem is, no-one knows the exact Caffeine dosage in B.A.M Shredded Bitch.

Ultimately, youll be at risk from jitters and energy crashes with this fat burner.

This is the first time weve seen Kigella Africana in a fat burner; its a flowering plant thats native to Africa, which can be fermented to create an alcoholic beverage.

Ultimately, no study has proven that Kigella Africana can promote fat loss. So we consider this to be an ineffective nutrient inside B.A.M Shredded Bitch.

White Willow Bark Extract is used as medicine, due to it containing salicin (which is a similar to aspirin). As a result, its believed to be an anti-inflammatory and pain reliever.

However, we didnt find any evidence to suggest that White Willow Bark Extract can promote fat loss. For this reason, we dont consider this to be a necessary addition to B.A.M Shredded Bitch.

Green Tea Extract is one of the best fat burning ingredients available; its proven to boost your metabolism and promote fat loss in numerous studies.

Not only that, Green Tea Extract has shown to benefit almost every organ in your body too.

However, studies have shown that the optimal dosage of Green Tea Extract is upwards of 500mg per serving. As its part of the Shredded Bitch Blend, no-one knows the exact dosage inside B.A.M Shredded Bitch (meaning you cant be sure whether itll work or not).

Bitter Orange Extract is one ingredient that we always try to avoid; it contains high amounts of Synephrine (which has been banned from use), and has been reported to cause numerous side effects.

Basically, although Synephrine is banned, Bitter Orange Extract is able to pass through legal loopholes.

However, we believe that its only a matter of time until Bitter Orange Extract is banned too. Until then, we advise that you avoid this ingredient to stay safe from side effects.

But one thing we will acknowledge, is that Bitter Orange Extract has shown to promote fat loss. So it works, but it comes at the cost of side effects (not worth it, when you have safe and effective options available such as Green Tea Extract).

Berberis Vulgaris is a common barberry (which is an edible fruit) thats added into tarts or eaten fresh in certain countries.

But the worrying thing is that Berberis Vulgaris is poisonous, so you can imagine that its not a good idea to add this into a proprietary blend. But thats exactly what B.A.M have done with B.A.M Shredded Bitch.

Also known as Lagerstroemia, the leaves of the Banaba plant is used to treat diabetic people; this is due to it containing corosolic acid, which has shown to help regulate blood glucose levels.

However, while this might help lessen the impact of insulin spikes after consuming large quantities of carbs, its not really necessary either.

The worrying thing is that you need to consume 3,000mg Banaba Leaf Extract for it to work. But the while proprietary blend inside B.A.M Shredded Bitch is only 1,405mg. 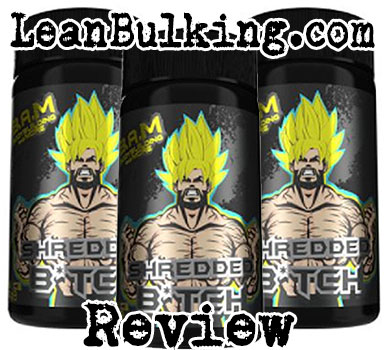 The main concern with B.A.M Shredded Bitch, is that it contains Bitter Orange Extract in an unknown quantity.

But you cant ignore that Caffeine Anhydrous has also been added to B.A.M Shredded Bitch in an unknown quantity too. This puts you at risk from jittery side effects and energy crashes.

As a general rule, we recommend consuming under 100mg Caffeine per capsule with fat burner supplements - to stay safe from side effects.

Heres the potential side effects from taking B.A.M Shredded Bitch:

However, what lets this fat burner down, is that the unknown quantities of Caffeine and Bitter Orange Extract puts you at risk from numerous side effects.

When youre paying to buy supplements to help you achieve your dream body, the last thing you want to experience are side effects.

Ultimately, we dont believe that B.A.M Shredded Bitch can compete with the highest rated fat burners on the market.

But its certainly not the worst product weve seen either.