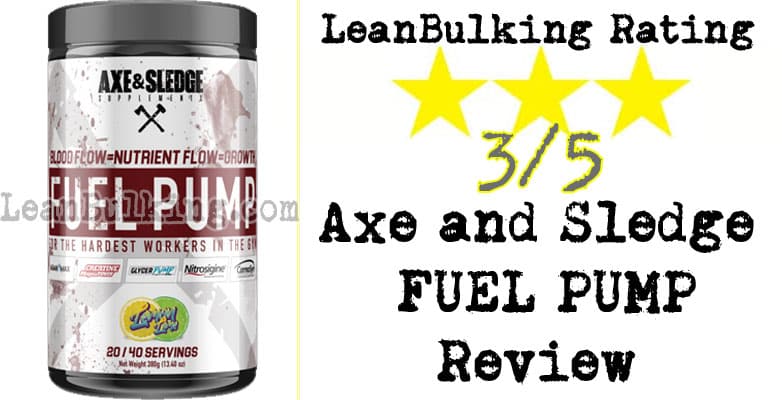 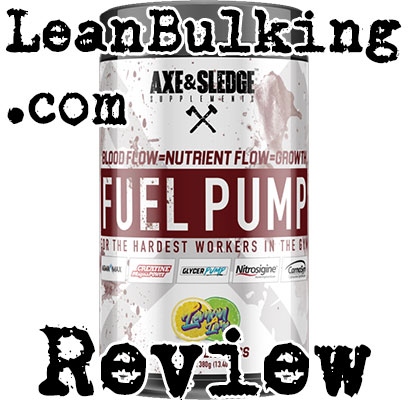 For those interested in flavors, FUEL PUMP comes in 2 flavor options; Lemon Lime and Strawberry Lemonade, making it a pretty tasty product if you’re worried about taste!

However, it’s important to know that FUEL PUMP is a stimulant-free pre-workout, so it’s not going to do much for your energy levels; so you’re not going to get that ‘kick’ of energy you do with pre-workouts containing stimulants such as Caffeine.

You might think that this is a negative here. But in fairness, we could argue that drinking a cup of coffee along with taking FUEL PUMP will give you that energy kick anyway.

So non-stim products aren’t always bad – in fact, it helps as you can take them for late night sessions and still sleep okay. Anyway, you can make your own mind-up about stimulant-free pre-workouts.

In the main section of this review, we’ll analyze FUEL PUMP’s nutrient profile, so you get a good idea of how safe and effective this product really is. But first, we’ll tell you more about the company behind it.

Who Is Axe and Sledge Supplements?

Axe and Sledge Supplements is a supplements company that was founded by IFBB Pro, Seth Feroce; you can’t argue with this bodybuilder’s credibility, and he’s generally very well respected in the industry.

We’re also big fans of Seth, so we’re more than happy to see him bringing out his own supplements to the market. This is because the same supplements have been dominating the market for quite some time, and we’d like to see more competing against the highest rated pre-workouts that have been unchanged for a few years now.

But you came here to learn more about their pre-workout supplement, FUEL PUMP. So let’s see which ingredients have been added in the section below…

Overall, FUEL PUMP contains 9 ingredients; this is on the border of what we would consider to be a ‘good amount’, as we see many pre-workouts containing over 10 nutrients and being under-dosed.

For this reason, we would prefer a company to add under 10 ingredients and make sure that each ingredient is dosed optimally.

In terms of how well ingredients are dosed in FUEL PUMP, we’re generally impressed. Axe and Sledge has made sure you get optimal dosages of both L-Citrulline and Beta-Alanine when you take 2 scoop servings of FUEL PUMP, which does mean you only get 20 servings per container of FUEL PUMP.

Now, 20 servings might be less than the average 30 servings per container. However, we would much prefer having 20 servings of an effective product over 30 servings of something that doesn’t work. So this isn’t a problem for us at all.

Anyway, we’ll take you through each ingredient in FUEL PUMP. By the end of this review, you’ll have a good idea of how safe and effective this pre-workout supplement really is.

When it comes to pre-workouts, L-Citrulline is one of the best ingredients out there. It’s proven to raise your nitric oxide levels, which leads to increased blood flow (and therefore enhanced muscle pumps while you lift weights in the gym).

Ultimately, it was the Austrian Oak (Arnold Schwarzenegger) himself that said muscle pumps were one of the best things in the world. And let’s be honest, feeling and seeing your bicep inflate while you curl is amazing.

You can’t really argue against L-Citrulline, as many studies have shown it’s effectiveness. And we’re especially happy that Axe and Sledge didn’t choose L-Arginine over L-Citrulline (which is quite a common mistake with other pre-workouts); this is because L-Arginine is known for having poor bioavailability, meaning it’s not fully utilized by your body when orally supplemented.

It’s commonly believed that Glycerol Powder is capable of improving your sporting performance. In fact, there have been studies that have backed-up this belief, so Glycerol Powder seems quite reliable if you just look at the positive studies.

So how does it work? Well, Glycerol is believed to help draw higher volumes of water into your muscles – which would technically help to enhance your muscle pumps. However, there simply hasn’t been enough studies conducted with Glycerol to make it a reliable ingredient, in our honest opinion.

For example, a nutrient such as Creatine Monohydrate has been around for many years and been proven to work countless times. So we would, at the current time, prefer more tried-and-tested ingredients added to pre-workout supplements such as FUEL PUMP. Although in fairness, many people will view Glycerol as a great addition here – it’s up to personal preference.

L-Taurine is quite well known, even by those that aren’t really into nutrition. This is because it’s found in popular energy drinks everywhere.

So what does it do? Well, Taurine has shown to be capable of reducing cramping during exercise. In fact, we’ve taken Taurine before playing rugby and football for this very reason.

But then again, you can avoid cramping by simply keeping yourself properly hydrated anyway.

The bottom line is that Taurine isn’t the main feature of any pre-workout supplement, but it can be a great ‘bonus’ addition.

Speak about Beta-Alanine to your bodybuilding friends, and it’s likely that they’ll all have mixed opinions on it. This is because Beta-Alanine can enhance muscular endurance, but it’s also known for causing your skin to itch and tingle.

The important thing to remember is that it does work. But we personally don’t enjoy the itching and tingling after taking pre-workouts containing them (in case you’re wondering, the official name of this side effect is paresthesia).

However, we do know lifters that don’t mind this side effect. So if you’re one of the bros that don’t mind feeling a bit tingly and itchy during a workout, Beta-Alanine isn’t a bad addition to FUEL PUMP here.

If you want to avoid tingly sensations, then we would advise to consume under 800mg per serving; studies show that you are safe from paresthesia at this dosage.

We just mentioned that we wished FUEL PUMP contained Magnesium Creatine Chelate. Well, Axe and Sledge clearly thought about this, as this nutrient is believed to offer the same effects as Creatine Monohydrate.

Now, there’s loads of science behind it, but we’re worried you would get bored. So we won’t get into all of that stuff – just know that Magnesium Creatine Chelate is a contender against Creatine Monohydrate.

Personally, we stick to what’s tried-and-tested. Call us old-fashioned, but Magnesium Creatine Chelate is the new boy on the block and there’s not much need to try and fix something that wasn’t broken in the first place.

Ultimately, Creatine Monohydrate has always worked for us, so we would still have preferred this over Magnesium Creatine Chelate here. But the younger lifters who are looking for new things all the time will appreciate this being added in FUEL PUMP.

In case you didn’t know, Agmatine is a metabolite of L-Arginine. But as we mentioned earlier, L-Arginine has a poor absorption rate, so it’s very likely that anything associated with it also has this problem.

Not only that, we don’t believe that there have been enough studies conducted on Agmatine Sulfate to make it reliable either.

L-Tyrosine is a ‘brain booster’ that’s known for being capable of improving your focus and general cognition. This is why it’s commonly found in nootropic supplements, as well as pre-workouts.

There’s nothing wrong with L-Tyrosine and it works. Basically, an increase in focus during your gym session will help strengthen your mind-muscle-connection – not bad at all.

We’ve grouped both forms together to save time, as we’re getting pretty hungry and want some food to feed our gains.

For this reason, we’re willing to consider L-Tyrosine as a key pre-workout nutrient here. And it’s even more beneficial in FUEL PUMP, as it doesn’t contain Caffeine Anhydrous which would have otherwise improved your focus.

This is basically a patented form of Arginine Silicate. It’s marketed as being able to enhance your muscle pumps. But as FUEL PUMP already contains a good dosage of L-Citrulline, there’s not much need for it.

However, the good news is that there are a few studies that show that it works. Now, in our honest opinion, we noticed that all studies on Nitrosigine were sponsored by companies – therefore we don’t believe that they are 100% reliable. But again, we’ll repeat that this is just our honest opinion.

So you can make up your own mind about Nitrosigine.

In terms of side effects, the only potential issue with FUEL PUMP is that it might cause your skin to itch and tingle; this is because it contains Beta-Alanine, which has shown to cause paresthesia.

So if you might want to avoid this pre-workout if you’ve had bad experiences with Beta-Alanine before. But we will point out that paresthesia isn’t a harmful side effect. And it will only last a few hours (although it does distract us from our gym session, personally).

Here are the potential side effects of taking FUEL PUMP:

You can see that we have a lot of respect for Seth Feroce. The man has a lot of gains. So we’re glad that he’s started using his expertise to create his own supplement company and products.

Usually, we find new brands and their first product isn’t very good. But we all have to start somewhere right? The good news is that FUEL PUMP is a great first effort; we think in future the formula could be improved even more. And it might even become the best pre-workout on the market if this happens.

Our personal favorite features of FUEL PUMP are the great dosages of L-Citrulline and Beta-Alanine; even though we don’t personally enjoy taking Beta-Alanine, we’re trying to give a completely unbiased review here. The addition of L-Tyrosine is worth mentioning too, which can enhance your focus in the gym.

There are many things to like about this pre-workout, and it might be a good option for those that are looking for a non-stimulant.

We now prefer taking non-stimulant pre-workouts as we can use them for late night sessions without being kept up all night.

However, due to it containing too much Beta-Alanine and putting you at risk of itching and tingling sensations, we don’t think it can compete with the highest rated pre-workouts available right now.