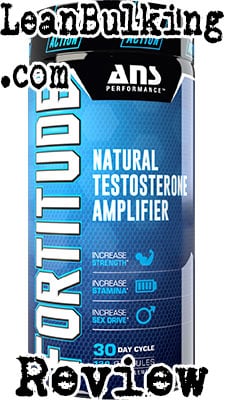 Fortitude II is a remake of ANS Performance’s original ‘Fortitude’ testosterone booster supplement. It costs $69.99 for 30 servings on their website, with a daily serving size of 4 capsules.

This is a great serving size, as studies show 3-4 capsules to be the optimal dosage; spreading out servings throughout the day keeps you fuelled with nutrients longer than 1-2 capsule servings (therefore benefiting you for longer too).

Anyway, we’ll analyze Fortitude II’s nutrient profile for you. But first, we’ll tell you more about the company behind it.

Who are ANS Performance?

ANS stands for ‘Advanced Nutrition Systems’, and they market a range of supplements – from protein powders to testosterone boosters such as Fortitude II.

However, it looked like their website was being upgraded, so there wasn’t an ‘about us’ section available when we looked.

None of this affects the quality of ANS Fortitude II though, so we’re more interested in which ingredients have been added inside. 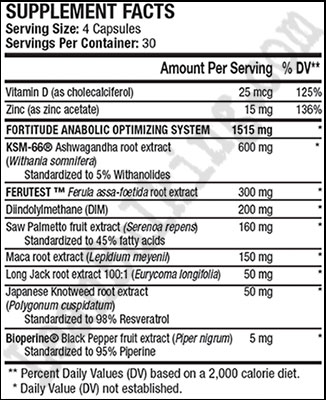 We consider Vitamin D3 to be the ‘king’ of nutrients, especially if you’re interested in raising your T levels.

Basically, studies have proven Vitamin D3 to be the best ingredient to boost your testosterone levels, as well as being able to reduce fatigue too.

In fact, doctors even encourage patients to consume Vitamin D3 supplements for this reason.

However, you need to keep an eye on the dosage; the same studies show that Vitamin D3 only works when consumed in dosages between 3,332IU-5,000IU per serving.

This shows us that ANS have either skipped some vital research, or cut costs and lowered the dosage here. Either way, we would have preferred to see an optimal dosage of Vitamin D3.

An essential mineral, Zinc is known for supporting healthy testosterone levels; you’ll find that foods high in Zinc are ‘aphrodisiacs’ for this reason (such as Oysters).

It’s quite hard to dose Zinc incorrectly, as you only need small amounts. So we’re not surprised to see a good dosage of Zinc in ANS Fortitude II here.

Saying that, we’ll still give credit where it’s due. Good job here.

In case you’re unaware, Ashwagandha Extract is a herb used in ayurveda (Traditional Indian Medicine). It’s been believed to raise test levels, but it hasn’t proven to deliver this benefit.

However, that doesn’t mean it’s useless; studies have shown that Ashwagandha Extract is able to improve your power output.

But saying that, when taking a T-Booster supplement, your main goal is tor raise you testosterone. For this reason, we have to consider this to be an ineffective nutrient here.

This is the first time we’ve seen Feurla Asafoetida Extract in a supplement. But after checking the studies conducted on this nutrient, it doesn’t seem likely to raise your testosterone levels.

It’s mainly used to improve lung and gastrointestinal health, so there’s no need for Ferula Asafoetida Extract to be inside ANS Fortitude II here.

Also known as Diindolymethane, this is an AI (Aromatase Inhibitor) that’s able to stop testosterone converting into estrogen.

However, this benefit isn’t needed in any natural test booster supplement; only steroids are strong enough to cause your T levels to rise to dangerous levels, where it begins to convert into estrogen.

Companies often add DIM into their T-Boosters to try and fool you into thinking it’s ‘stronger’ than it is. So don’t be fooled.

The bottom line is that DIM isn’t needed here, and it’s even shown to cause side effects when consumed in large dosages.

What side effects? A potential raise in estrogen levels, and the worrying thing is that no-one knows what amount is ‘too high’.

Usually companies only add 100mg DIM into their products, so this 200mg serving is one of the highest we’ve seen – putting you at risk.

We’d rather companies left DIM out, instead of trying to fool you. We would have preferred to see a tried-and-tested nutrient such as D-Aspartic Acid in ANS Fortitude instead here.

Saw Palmetto Extract is usually added into supplements to combat the side effect of Tribulus Terrestris (enlarged prostate).

However, as ANS Fortitude II doesn’t contain Tribulus Terrestris, we’re not actually sure why its been added here; it has no effect on T levels, and even puts you at risk from side effects.

For this reason, we consider Saw Palmetto Extract to be an ineffective nutrient in ANS Fortitude II.

Maca is a type of vegetable that’s found in the species of ‘broccoli’ family, and has been used as an aphrodisiac in the past; this is because it’s known for being able to raise your libido.

However, the problem is that Maca Root Extract hasn’t proven to raise your Testosterone levels in any study.

Again, we’ll repeat that the main benefit we want when taking test booster supplements is a raise in T levels. So while it can be useful, it’s certainly not a key addition to ANS Fortitude II.

Also known as Eurycoma Longifolia or Tongkat Ali, this herb has been used as an aphrodisiac too.

Again, like Maca Root Extract, this has shown to raise your libido, but is unable to boost your T levels. For this reason, this is another ingredient that’s not really needed in ANS Fortitude II.

Ultimately, we would have rather seen D-Aspartic Acid instead.

From the name of this nutrient, you can probably guess where it originates from. But it’s also used in Traditional Chinese Medicine too to improve heart health.

However, the bad news is that Japanese Knotweed Extract hasn’t shown to raise your T levels in any study. For this reason, we consider this nutrient to be an ineffective addition to ANS Fortitude II. 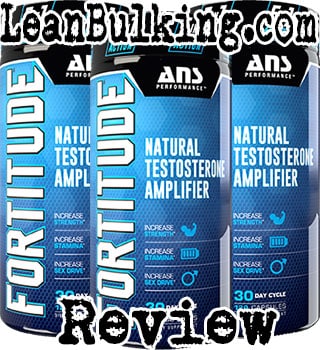 There are 2 ingredients in ANS Fortitude II that put you at risk from side effects; Saw Palmetto Extract and DIM.

In case you skimmed through the section above, we’ll give you a quick summary.

Basically, DIM can raise your estrogen levels when consumed in high amounts (ANS Fortitude II contains 200mg, which is the highest dosage we’ve seen in a supplement). And Saw Palmetto Extract can cause numerous side effects, which we’ll bullet point below.

Here’s the potential side effects from taking ANS Fortitude II:

After analyzing ANS Fortitude II’s nutrient profile, it doesn’t seem likely to raise your testosterone levels. In fact, the only benefit it’s likely to deliver is increased libido.

While this is a good benefit, the main reason you buy testosterone booster supplements is to raise your T – that’s the truth.

So we don’t believe ANS Fortitude II can compete with the highest rated T-Boosters on the market for this reason.

It’s a shame that ANS Fortitude II doesn’t contain an optimal dosage of Vitamin D3, as this would have improve our rating of this test booster.

However, it’s the little things that make a big difference between average products, and the best ones.