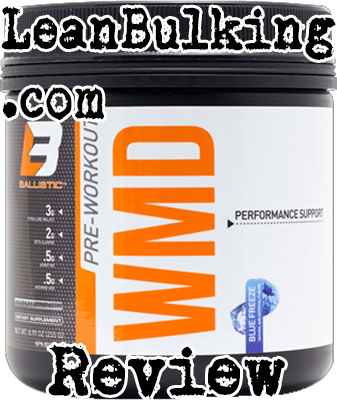 WMD pre-workout is made by Ballistic Labs. It costs $54.99 for 60 serving containers, with a choice of 4 flavors – Peach Mango, Candy Crush, Blue Freeze, and Grape.

From first glance, it doesn’t look too bad; WMD pre-workout doesn’t contain any proprietary blends, so being able to see the dosage of each ingredient is a good thing.

But it’s strange that the ‘normal’ serving of WMD pre-workout seems to be 1/2 scoop, as the 1 scoop serving contains an overload of Caffeine (400mg) that’s likely to cause jitters.

Anyway, we’ll explain everything in more detail in the next section. But first, we’ll tell you more about Ballistic Labs.

There wasn’t much information on Ballistic Labs’ website, so we didn’t learn when they were founded.

In fact, we didn’t learn anything about them from their ‘about us’ section. So without wasting anymore time, let’s take a look at WMD pre-workout’s nutrient profile below…

WMD pre-workout contains 10 ingredients overall, which is slightly too many. And judging from the dosages of nutrients inside, it doesn’t seem dosed very well either (the Citrulline Malate is seriously under-dosed).

The worst thing we can see on WMD pre-workout’s nutrient profile, is that it contains Bitter Orange Extract; this has commonly been reported to cause numerous side effects, so we always advise you to avoid it when possible.

Anyway, we’ll take you through the main ingredient inside WMD pre-workout. By the end of this review, you’ll know how safe and effective this supplement really is. 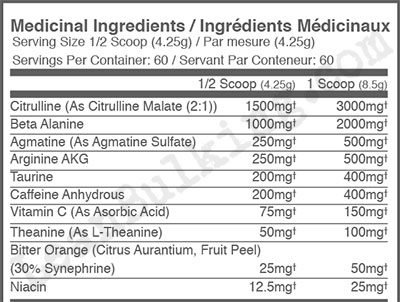 Citrulline Malate is a key addition to any pre-workout supplement, as it’s proven to enhance your muscle pumps in the gym.

How does it work? Well, it converts into L-Arginine in your kidneys, which raises your nitric oxide levels and increases your blood flow.

Why not take L-Arginine directly? Good question. L-Arginine has a poor absorption rate, so it’s mostly ineffective when orally supplemented.

But it’s important to know that Citrulline Malate has only shown to work in dosages of 6,000mg per serving; as WMD pre-workout only contains 1,500mg for it’s ‘normal’ serving, it’s been seriously under-dosed here.

In fact, even when you take the 1 scoop serving, you’re still not getting enough Citrulline Malate.

We always have mixed opinions about Beta-Alanine, as it’s able to enhance your muscular endurance. But the problem is that it causes paresthesia (itchy & tingly skin).

Personally, we find this side effect distracting while we’re lifting weights in the gym. However, we know that others don’t find it too bad – so we’ll leave it up to personal choice.

Whether Beta-Alanine is a good or bad thing is up to you. But we would have preferred to see Creatine Monohydrate here instead, as it offers the same benefit, without causing any side effects.

We’ve grouped these 2 ingredients together, as they’re both ineffective for the same reason; they’re both extracted from L-Arginine.

Remember that L-Arginine has a poor absorption rate when orally consumed. This means that anything taken from it has the same problem too, and studies have confirmed this.

For this reason, we consider both Agmatine Sulfate & Arginine AKG to be unreliable ingredients in WMD pre-workout.

Taurine is believed to raise your energy levels as it’s found in energy drinks. But it isn’t a stimulant so it’s not able to deliver this benefit.

That doesn’t mean it’s useless though; Taurine is able to help reduce cramping.

Saying that, you can reduce cramping by keeping yourself hydrated throughout your gym session. But Taurine still makes a good ‘bonus’ addition to a pre-workout.

In case you’re wondering, ‘Anhydrous’ means that Caffeine has been dehydrated into powder form, so it can be added into supplements.

Caffeine Anhydrous is the best stimulant you can find in supplements, as it’s proven to be safe and effective.

But you need to check the dosage of Caffeine in products; we advise that you consume under 200mg Caffeine per serving in pre-workouts.

Now, when taking WMD pre-workout’s ‘normal’ 1/2 scoop serving, you’re consuming a reasonable amount of Caffeine that shouldn’t cause side effects.

However, when taking the full 1 scoop serving, you’re getting a HUGE 400mg dosage of Caffeine, which is almost certain to cause jittery side effects.

For this reason, we recommend that you consume the 1/2 scoop serving if you’re interested in WMD pre-workout.

L-Theanine can be a key addition to any pre-workout, when it’s dosed correctly; when consumed in higher amounts than Caffeine, it forms a ‘smart-caffeine’ which enhances the benefits of the stimulant while keeping you safe from jitters.

But the problem is that there’s only a 50mg dosage of L-Theanine when consuming 200mg Caffeine. This means that you’re not getting enough L-Theanine for it to take effect.

For example, if you’re consuming 150mg Caffeine, then you’ll need at least 200mg L-Theanine. As a result, we can confirm that L-Theanine has been under-dosed in WMD pre-workout.

This is the worst ingredient in WMD pre-workout; it’s commonly reported to cause numerous side effects, which isn’t a good thing.

We’ve personally experienced side effects when taking pre-workouts containing Bitter Orange Extract. So we always advise you to avoid supplements containing it.

Why does it cause side effects? Well, Bitter Orange Extract contains high amounts of Synephrine, which is a chemical that’s been banned from use in most countries (including the USA & UK).

So after you know this, it’s no surprise that Bitter Orange Extract causes side effects. Ultimately, having this in a supplement is a bad thing, and something you should try to avoid when choosing a pre-workout. 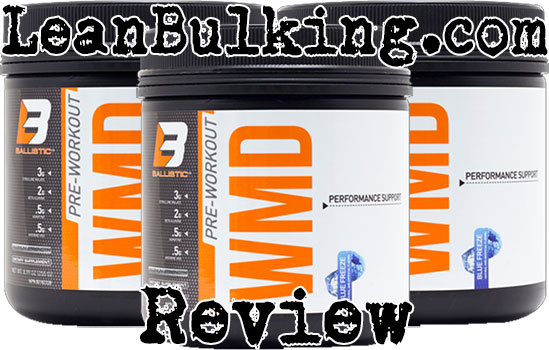 There are 3 things that can cause side effects in WMD pre-workout; Bitter Orange Extract, Beta-Alanine, and the overdose of Caffeine with the full 1 scoop serving.

In case you skimmed past the section above, we’ll give you a quick summary.

Basically, Beta-Alanine causes paresthesia (itchy & tingly skin), Bitter Orange Extract is known for causing numerous side effects, and Caffeine can cause jitters & energy crashes when consumed in dosages over 200mg per serving in pre-workouts supplements.

Here’s the potential side effects from taking WMD Pre-Workout:

From first glance, WMD pre-workout seem much better than it is; it doesn’t contain any proprietary blends (which is a good thing), so you can see the exact dosages of ingredients inside.

It also contains some great nutrients, but it becomes clear that most of them are under-dosed – especially Citrulline Malate.

Ultimately, this is the main problem with WMD pre-workout; you can add key nutrients, but if they’re under-dosed, then they’ll still be ineffective.

For this reason, WMD pre-workout can’t compete with the best pre-workouts on the market.

Most of WMD pre-workout’s nutrients haven’t been dosed correctly, and there’s a high chance you might suffer side effects with this product.

As a result, our honest opinion would be to advise you to look elsewhere to get better value for your money.