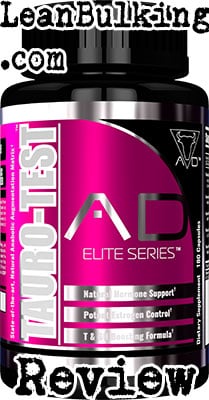 TauroTest is a testosterone booster supplement made by Anabolic Designs (AD). It costs $64.99 for 90 servings, with a serving size of 2 capsules per day; personally, we prefer 3-4 daily servings, as this keeps your body fuelled with nutrients better throughout the day.

However, from first glance, TauroTest looks very positive. It contains some great ingredients shown to have a positive effect on testosterone levels, especially Fenugreek Extract.

Anyway, well expand on this and more in the next section, where well take you through each ingredient inside TauroTest. But first, wel tell you more about the company behind it.

Who are Anabolic Design?

Anabolic Design didnt have an about us page at the time of writing this review. For this reason, we couldnt find out much more about this company - but we believe that this company was founded around 2009.

But the good news is that we like their sponsored athletes; Anabolic Design seem to put an emphasis on sponsoring up-and-coming bodybuilders, which we like (as everyone deserves a chance to succeed).

We also like their very distinctive pink/purple and black color scheme. Theyve really created a good brand here, and you can tell its their product from a mile away - so great job by them here.

Ultimately, Anabolic Designs looks like a great company, so lets see what ingredients theyve added to TauroTest below…

TauroTest contains 14 ingredients overall; we do consider this to be more than necessary, as we find that products containing under 10 nutrients can be optimally dosed and fairly priced.

Now, theres no issue with the price of this product ($64.99), but we will be checking the dosages of ingredients in TauroTest against scientific studies - to see whether they have been dosed correctly.

There is one small negative that we spotted for us personally; every ingredient is part of proprietary blends, so youre not shown the exact dosages of ingredients inside TauroTest (well expand on this below).

This has the potential to increase your risk of side effects, and can also put the effectiveness of products in question. For this reason, we prefer supplements that dont contain any proprietary blends.

Now that weve got that small negative point out of the way, well be focusing on the positives from now on. This is simply because there are more positive things about TauroTest than negatives.

So well take you through each ingredient inside TauroTest. By the end of this review, youll have our expert, honest opinion on how safe and effective this testosterone booster really is. 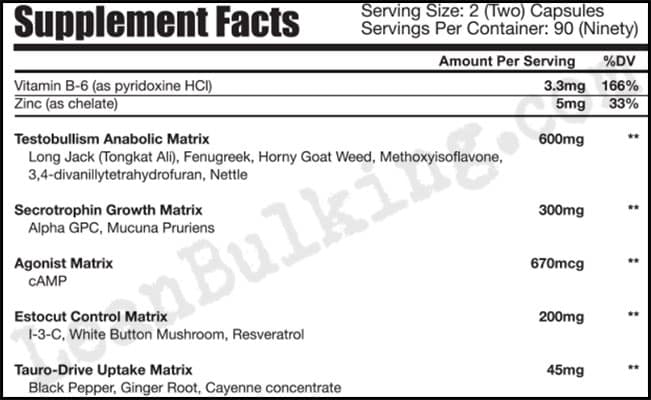 Also known as Tongkat Ali, Long Jack is a herb thats been used for decades in ayurvedic (traditional Indian medicine).

The good news is that studies have shown that its able to improve your libido, which is a useful benefit from taking T-Boosters.

However, it doesnt appear to be reliable at boosting your testosterone levels. So we dont consider Long Jack to be a key addition to TauroTest here, although it is a great bonus to have in any T-Booster supplement.

Interestingly, you might not have heard about this nutrient, but you might have consumed it; Fenugreek Seeds are commonly found in Indian foods (especially curries), as well as in traditional Indian medicine.

We consider Fenugreek Seed Extract to be the best ingredient in TauroTest, as studies have proven its able to raise your libido and testosterone levels.

The slightly bad news is that youre not shown the exact dosage of this nutrient in TauroTest. But as you only need at least 50mg for this to work, it shouldnt be a problem here.

Also known formally as Epimedium, this is a herb thats been used in tradition Chinese medicine for a very long time.

It was given its name after researchers found that it improved the T levels and libido of goats that fed on it.

However, there hasnt been many reliable studies proving that it delivers the same effect in humans.

Ultimately, were willing to give this ingredient the benefit of the doubt here, as its not commonly reported to cause side effects either.

This is an interesting addition to TauroTest. We consider it to be a slightly controversial ingredient (but this is simply our honest opinion), as its believed to be a chemical found in plants thats supposed to deliver effects similar to steroids.

Ultimately, this would be amazing if it was proven to work, but we havent seen enough studies to consider Methoxyisoflavone as a reliable ingredient.

However, well be keeping an eye on this nutrient in the future and will let you know if its proven to be reliable.

This is a compound found in Stinging Nettle Root Extract thats believed to improve your testosterone levels - which makes it a great addition to TauroTest.

However, we personally believe that the optimal dosage for 3,4-divanillyltetrahydrofuran is 600mg per serving; the proprietary blend that its contained in only adds up to 600mg overall, so its almost impossible to be dosed for our preference here.

But even in lower dosages, its still likely to work, just at a slower rate - which isnt all that bad.

In fact, we actually consider 3,4-divanillyltetrahydrofuran to be one of the best ingredients in TauroTest.

Alpha-GPC is a compound thats naturally found in your brain. Its believed to have very positive effects on your cognition for this reason.

WebMD reports that Alpha-GPC can potentially cause side effects such as heartburn and insomnia (you can see this here: https://www.webmd.com/vitamins-supplements/ingredientmono-1087-alpha-gpc.aspx?activeingredientid=1087&activeingredientname=alpha-gpc)

However, we cant confirm this, as we have no personal real-life experience with Alpha-GPC.

Mucuna Pruriens is also known as velvet bean due to its furry texture (before its ground into a powder to be added into supplements).

We consider it to be one of the better testosterone boosting nutrients. This is because its able to raise your L-Dopa levels. Which is known to have a positive effect on both your T and HGH levels.

However, weve only ever tried and had good experiences with Mucuna Pruriens in dosages of at least 300mg per serving. As TauroTest contains around 250mg at most, we cant promise you as fast results here.

However, again, we believe that Mucuna Pruriens will still be effective, even if it might work at a slower rate due to being dosed lower than were used to in TauroTest.

cAMP is another interesting ingredient in TauroTest, but we dont have much knowledge of it at all.

Its official name is Cyclic Adenosine Monphosphate, and is believed to help activate your adrenaline; this will boost your metabolism and promote fat loss.

However, there hasnt been enough studies conducted on cAMP for us to state that its reliable. Not only that, while it might be effective at promoting fat loss, cAMP isnt believed to raise your T levels.

Ultimately, when buying a T-Booster like TauroTest, we would have preferred to see a nutrient capable of raising your testosterone levels instead (such as Vitamin D3).

Also known as Indole-3-Carbinol, this is a compound commonly found in green vegetables (such as broccoli).

Its most commonly believed to be effective at preventing cancer, and is part of the reason why green vegetables are considered to be healthy.

You cant really argue against Indole-3-Carbinols ability to improve your general health. But it doesnt appear to be likely to raise your testosterone levels (but this is simply our honest opinion).

In case youre wondering, this is the same type of mushroom that youll eat as part of a meal.

So why has it been added into TauroTest? Well, its believed to inhibit aromatase enzyme (which would reduce your risk of suffering from side effects associated with higher estrogen levels).

We dont believe this is really necessary in natural testosterone boosters, as there isnt much risk in your T levels raising so far that itll begin converting into estrogen. But theres certainly nothing bad about having this in here.

Have you ever wondered why red wine is believed to be good for your health? Its because its a source of resveratrol; its built a reputation for supposedly being able to prolong your lifespan.

Now, while Resveratrol isnt some-kind-of fountain of youth ingredient, studies have shown that it has a positive effect on your general health.

For this reason, we consider it to be a great bonus addition to any supplement.

In case youre wondering, yes, this is the same Black Pepper Extract that youll spinkle on your food to enhance its taste.

However, you might not be aware that its able to improve the absorption rate of supplements its contained in.

So while Black Pepper Extract is never going to be a key ingredient, its certainly a useful addition to any supplement.

In fact, you might already know that Ginger Root Extract is also beneficial to your general health too. So this is another good bonus to have in TauroTest.

It seems like Project Anabolic Design has tried to make TauroTest into a hybrid supplement - we believe that theyve aimed to create a supplement thats able to raise you T and promote fat loss at the same time.

Why? Because Cayenne Pepper Extract is known as an effective fat burning ingredient.

This is because Cayenne Pepper Extract raises your body temperature due to being a thermogenic nutrient. As a result, your body has to work harder to regulate its temperature, leading to you burning more calories in the process.

In fact, you cant really argue against this ingredient, as youll have been sweating after eating one of these chillies in the past.

For this reason, we consider Cayenne Pepper Extract to be a key addition to a fat burner supplement. But its not exactly necessary in a testosterone booster like TauroTest. 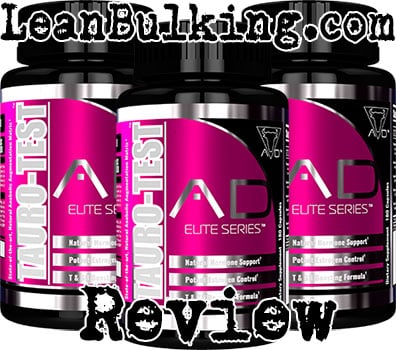 The good news is that TauroTest doesnt contain any ingredients that seem likely to cause side effects.

The only ingredient that has the potential to cause side effects is Alpha-GPC; as weve already mentioned, WedMD believe that this might cause minor problems such as heartburn or temporary insomnia.

For this reason, were happy to consider TauroTest as being likely to be side-effects-free.

All in all, TauroTest definitely has more positives than negatives. It contains some great ingredients such as Fenugreek Seeds Extract, which we consider to be a key addition to any testosterone booster supplement.

Not only that, some of its other ingredients such as Mucuna Pruriens and 3,4-divanillyltetrahydrofuran (the compound found in stinging nettle root extract) have shown to deliver positive results in studies.

However, we personally believe that Vitamin D3 is the best nutrient when it comes to boosting your T levels, as well as general health. For this reason, while TauroTest isnt our personal favorite T-Booster, it certainly seems to be effective.

TauroTest seems to be a safe and effective T-Booster. However, personally, we believe that there are better options on the market available.