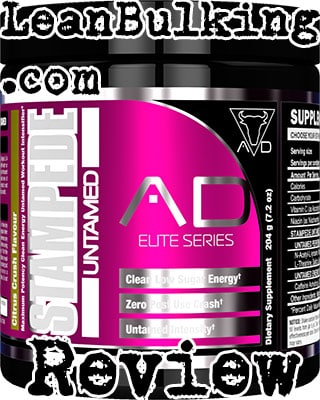 Stampede Untamed is a pre-workout supplement by Anabolic Designs. It comes in 30 serving containers, but this differs depending on how many scoops you consume each serving (take a look at its ingredient list further down to see what we mean).

We really like that Anabolic Designs has formulated Stampede Untamed so you can consume more scoops if you want; theres always those days when you need an extra kick after a long day in the office, so this is very useful.

As far as were aware, this only comes in a Citrus Crush flavor. But this is a sneak peak, and we havent managed to get our hands on this pre-workout yet.

So well be giving you our expert, honest opinion of Stampede Untamed by analyzing its ingredient list in the next section. But first, lets find out more about the company behind it.

Who are Anabolic Designs?

We like Anabolic Designs color scheme for their brand; it stands out and you instantly know its them, with their pink/purple and black combo.

They didnt have an about us section on their page, so we dont know which year they were founded. But we like that theyve sponsored athletes of all levels - everyone deserves a chance, and we have a good feeling about some of their up-and-coming athletes.

As well as this pre-workout, Anabolic Designs has also marketed a fat burner and a testosterone booster. However, youre here to learn more about Stampede Untamed - so lets see whats inside below…

Stampede Untamed contains 12 ingredients overall, which we believe to be a lot to have in 1 supplement. However, one bad thing is that each ingredient has been added into a proprietary blend (well expand on this below).

Proprietary blends are mixtures of numerous ingredients thatre only shown to you as 1 quantity. As you can see from the Untamed Performance Blend on Stampede Untamed pre-workouts ingredient list, the overall amount is 1066.5mgmg - but youre not shown the dosages of each ingredient inside such as Caffeine Anhydrous.

This has the potential to increase your risk of side effects, and can also put the effectiveness of products in question. For this reason, we prefer supplements that dont contain any proprietary blends.

You can see that were not big fans of companies adding proprietary blends. But were not here just to criticize Stampede Untamed, so well be focusing on the positives from now on.

And the good news is that there are many positives about Stampede Untamed; it contains some great ingredients that are proven to enhance your focus, strength and endurance.

Well expand on this and more as we take you through each ingredient inside Stampede Untamed. By the end of this review, youll know our expert, honest opinion on how safe and effective this pre-workout really is.

Known as a brain booster, L-Tyrosine is proven to boost your cognition; this includes improvements in your focus and memory, making it a perfect addition to a nootropic supplement.

Its also a great bonus feature in a pre-workout, as increased focus will enhance your mind-muscle-connection - helping you get the most of every rep.

But the reason we say its a bonus, is because Caffeine Anhydrous improves your focus enough to benefit your gym session (which is also contained in Stampede Untamed).

Its believed that Choline Bitartarte is able to boost your general health by positively affecting your liver function, among other things.

We believe that it can be a good addition to a multi-vitamin type product that you buy solely to improve your general health. But as it doesnt deliver benefits to take your training to the next level, we dont believe its necessary in pre-workouts.

Not only that, studies have shown that Choline Bitartrate can cause your breath and sweat to smell fishy - which is why we choose to avoid this ingredient.

However, this isnt a harmful side effect, so its not bad for those that dont mind it. (You can see 1 study suggesting it can cause fishy odors here: https://www.ncbi.nlm.nih.gov/pmc/articles/PMC3815698/)

Were going to put our hands-up here and admit we dont know much about this ingredient at all. But this is also due to there being limited studies conducted on it too.

From what we do know, this nutrient is known as AMP for short, and is believed to increase your ATP levels (similarly to how Creatine Monohydrate does).

If it is proven to work in numerous studies in the future, then well consider AMP a key addition to pre-workout supplements.

However, due to the lack of studies at present, we cant say for sure whether its going to work. For this reason, we prefer Creatine Monohydrate at the time of writing this review.

We are impressed that Anabolic Designs researched enough to find this ingredient though. One thing is for sure - they definitely did their homework before formulating Stampede Untamed, so credit where credit is due!

Were also impressed that Anabolic Designs has added L-Theanine into Stampede Untamed; this shows that theyve done their research here.

Basically, L-Theanine is able to work in synergy with Caffeine to form whats known as a smart caffeine; L-Theanine is a relaxing agent thats able to keep you calm while consuming stimulants.

Now, we dont know how much Caffeine Anhydrous is contained in Stampede Untamed, due to it being in a proprietary blend. However, L-Theanine considerably reduces the risk of jitters, so this is great.

L-Theanine is definitely a key addition to any pre-workout, so its great to see it in Stampede Untamed.

Salicin is a compound found in the bark of the willow tree, and is believed to be an anti-inflammatory which can also dull pain.

Weve seen increasing amounts of pre-workouts containing pain-relief ingredients, but we struggle to see why (if anyone can give us a friendly comment on this product, itll help us understand better).

The good news is that Salicin hasnt shown to cause any side effects, so theres nothing wrong with having this in Stampede Untamed.

Gamma Butyrobetaine Ethyl Ester Hydrochloride is another ingredient that were not familiar with.

However, after doing some research, we found that its believed to raise your nitric oxide levels, which would directly improve your muscle pumps in the gym.

This is another example of how much effort Anabolic Designs has put into formulating Stampede Untamed; its great to see them carefully adding unique ingredients, rather than going with the crowd.

Again, we cant say for sure whether this will work, due to the lack of studies conducted on this ingredient. But early signs are promising, so well be keeping an eye on this nutrient.

But for now, we prefer Citrulline Malate when it comes to improving your muscle pumps; this has been around for a while and is proven to work.

In case youre wondering, this is the same stuff you sprinkle on your food to enhance its taste.

But its more useful than you might think; Black Pepper Extract is proven to boost the absorption rate of ingredients its digested with - improving the overall effectiveness of supplements.

While Black Pepper Extract isnt going to improve your performance in the gym on its own, its certainly a great bonus addition to Stampede Untamed here.

Similarly to L-Tyrosine, Huperzine A is another brain booster ingredient. Its a herb thats known for improving your levels of acetylcholine (the learning neurotransmitter).

The good news is that, unlike Choline, Huperzine A hasnt shown to cause your breath and sweat to smell fishy. So as Huperzine A is in Stampede Untamed, Anabolic Designs could have removed Choline - but again, well repeat that this isnt a big issue.

Caffeine Anhydrous is a key addition to any pre-workout; its perfect, as it takes effect almost immediately, and is able to boost your energy levels - helping you feel unstoppable in the gym.

But one thing that we recommend, is knowing the exact dosage of Caffeine that you consume. This will help keep you safe from jittery side effects (like what happens when you consume too much coffee in a short-period of time).

However, although youre not shown the exact amount of Caffeine in Stampede Untamed, were willing to give Anabolic Designs the benefit-of-the-doubt here.

Theyve proven that theyve conducted plenty of research while formulating Stampede Untamed already, so we believe that they will have added a safe and effective dosage of Caffeine here.

Not only that, as Stampede Untamed contains L-Theanine too, your risk of jittery side effects is decreased even more. But we do prefer it when companies list the exact dosage of Caffeine inside their products.

Also known as DMHA, this is known to be a stimulant thats also effective at promoting fat loss. However, we have to point out that its banned in professional sports, so avoid this ingredient if youre a high-level athlete.

Otherwise, it seems effective and gets the job done. In case youre wondering, DMHA isnt banned because its dangerous, but because it can give athletes an unfair advantage - so it works.

However, this is another stimulant inside Stampede Untamed, so were hoping that Anabolic Design has added a sensible dosage of DMHA here.

Theobromine is the stimulant found in cocoa beans. Its believed to be responsible for the buzz you get after eating chocolate, which makes sense.

Its not as strong as Caffeine Anhydrous, but alongside 2 other stimulants, were worried that it might cause jitters. But again, Anabolic Designs has shown that theyve carefully formulated Stampede Untamed, so were willing to give them the benefit-of-the-doubt here.

Also known as Higenamine, we believe this chemical to be the worst addition to Stampede Untamed. Studies has shown that it can affect your trachea and heart muscles (see study here: https://www.thieme-connect.de/DOI/DOI?10.1055/s-2006-957628).

But the good news is that its not toxic; studies show that even consuming crazy large amounts of Higenamine isnt going massively harm you. 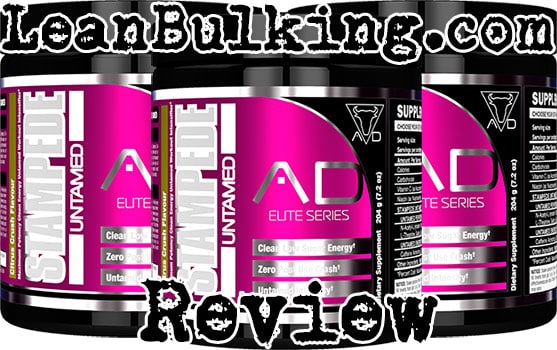 As weve mentioned, there is the potential for Stampede Untamed to cause jittery side effects; this is our honest opinion, due to there being 3-4 stimulants added in unknown quantities to the customer.

However, Anabolic Designs has clearly done their research while formulating Stampede Untamed, so were trusting them to have added sensible dosages of each stimulant.

For this reason, we advise you to take a half-scoop to see how strong it is. Then increase the amount you take each serving to find the best serving size for you.

Heres the possible side effects from taking Stampede Untamed:

Were impressed that Anabolic Designs has added some great ingredients in Stampede Untamed; theyve even added some up-and-coming nutrients such as Gamma Butyrobetaine Ethyl Ester Hydrochloride and Adenosine 5monophosphate Disodium Salt, which might prove to be amazing features in future pre-workout supplements.

The only bad thing about Stampede Untamed, is that ingredients have been added into proprietary blends. However, while youre not shown the exact dosages of ingredients inside, were placing some trust in Anabolic Design, as theyve shown us that theyve spent countless hours researching before formulating Stampede Untamed.

For this reason, we recommend taking a half scoop to assess your tolerance of this pre-workout first. But you should have a good experience with it.

Stampede Untamed could prove to be one of the best pre-workouts on the market, when future studies are released on some of its lesser known nutrients.

But for now, we would personally choose pre-workouts containing more reliable ingredients.