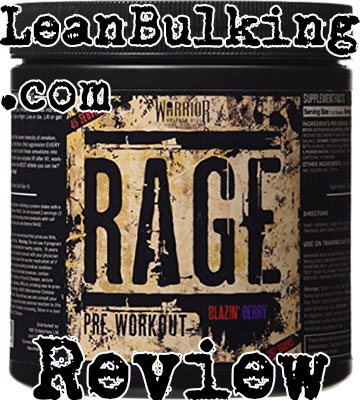 RAGE is a pre-workout supplement made by Warrior Supplements. It costs around $20 dollars on Amazon, so it’s definitely one of the cheaper products on the market. So we’re expecting there to be some issues where costs have been cut; if we don’t find any, then Warrior RAGE will be a great pre-workout!

This supplement caught our attention because it was receiving some great reviews on Bodybuilding forums. For the price, you can’t complain if it doesn’t cause any side effects. But here at LeanBulking.com, we’re looking for the best of the best. So let’s see if Warrior RAGE can keep up with the higher-priced, premium pre-workouts available.

We’ll do this by analyzing Warrior RAGE’s nutrient profile in the next section. But first, we’ll tell you more about the company behind it.

Who Are Warrior Supplements?

Warrior Supplements seem to be a UK-based company, as we couldn’t find their products for sale in the USA. Also, only UK stores seem to sell this online, so that would make sense.

Fortunately, one of our team members was stopping-over in the UK. So we managed to sample it while across the pond and see whether UK’s incredibly well-priced pre-workout could compete with the made-in-USA premium products.

Ultimately, we couldn’t find Warrior Supplements’ website, so we don’t believe they have one. So let’s get straight into which ingredients have been added to Warrior RAGE in the section below…

Warrior RAGE contains 7 main ingredients, which isn’t a bad number to have in a pre-workout. From experience, we’ve found that supplements with over 10 nutrients are often under-dosed, so we prefer less that are dosed better.

However, the problem we have with Warrior RAGE is that every ingredient has been added to a proprietary blend (we’ll expand on this below)…

Proprietary blends are mixtures of numerous ingredients that are only shown to you as 1 quantity. As you can see from the ‘Vitamin C Endur-Strength Synergistic Complex’ on this pre-workouts ingredients list, the overall amount is 8,700mg – but you’re not shown the dosages of each ingredient inside such as Beta-Alanine.

This increases your risk of side effects, and also makes it uncertain whether Warrior RAGE will work. For this reason, we try to avoid any supplement that contains proprietary blends.

However, it’s not all negatives. We’re very happy to see that some great pre-workout ingredients such as Citrulline Malate and Caffeine Anhydrous have been added to Warrior RAGE. Even the inclusion of BCAAs makes this more of a product worth looking at too.

Anyway, we’ll analyze each ingredient in Warrior Rage for you in this section. By the end of this review, you’ll have a good idea of how safe and effective this pre-workout really is.

In case you’re wondering, BCAAs stands for ‘Branched Chain Amino Acids’. They’re 3 of the 9 essential amino acids that are required for muscle growth. So it’s no surprise that you can consume them all through protein shakes.

So why are they added to Warrior RAGE? Well, some people like to play-it-safe and consume BCAAs before their workout to try and prevent muscle loss.

However, we prefer to buy BCAAs separately from our pre-workouts so we can decide exactly when to take them; personally, we prefer taking BCAAs partway during our gym session, or if we’re performing some cardio after our lifting some heavy-*ss weights.

Not only that, you should be getting enough protein and essential amino acids through your meals. Remember that supplements should ‘supplement’ your diet and improve your workout, without replacing meals.

For this reason, while BCAAs can be a useful ‘bonus’ in a pre-workout, we don’t think they’re completely necessary. There aren’t any negatives to having them in Warrior RAGE though. We would have just preferred something more useful to improve your performance in the gym such as Creatine Monohydrate.

We always have mixed opinions about Beta-Alanine. It’s shown to enhance your muscular endurance, but at the same time, it can cause itchy & tingly skin (a side effect officially known as paresthesia).

In fairness, some people like feeling this ‘itchy & tingly’ sensation from Beta-Alanine. So if you’re one of these people, then there’s nothing but benefits here for you.

However, unfortunately, we find paresthesia very distracting when we’re trying to focus on lifting heavy-*ass weights and making gains.

Not only that, as Beta-Alanine is hidden in a proprietary blend, you can’t be sure whether it’s actually going to work here; this is why it’s always better to know the exact dosages of nutrients added to supplements.

Ultimately, this is the first example of why we try to avoid products containing the dreaded proprietary blends. The sooner companies stop using them, the better!

There are so many different forms of Creatine now that we’ve lost count. However, we’re not convinced that these new formulations are as effective or reliable as the crowd-favorite, Creatine Monohydrate.

Basically, Creatine Monohydrate has been used for decades now. It’s so reliable that no-one even bothers to argue whether it works or not because everyone knows that it does; there have been tons of studies proving that it works over the years too.

But the same can’t be said about these new discoveries. As there are fewer studies that have been conducted on them, we have to consider them to be less reliable.

For this reason, we don’t believe that there’s any need to fix something that’s not broken. Call us old-fashioned, but we prefer to stick with Creatine Monohydrate over Creatine Gluconate.

AAKG is believed to raise your nitric oxide levels; this would lead to increased blood flow and therefore enhanced muscle pumps in the gym.

However, we consider Arginine Alpha-Ketoglutarate as highly unreliable due to studies showing that it doesn’t work.

One study in particular by Willoughby DS et al analyzed 24 active males during 7 days of AAKG supplementation. The study concluded that while the men experienced higher levels of L-Arginine in their bodies, that this was due to the resistance training they were performing throughout the study.

So basically Willoughby DS found that AAKG didn’t work, and you can find that study here: https://www.ncbi.nlm.nih.gov/pubmed/21813912

For this reason, we don’t consider this a necessary addition to any pre-workout supplement.

Citrulline Malate is one of the best ingredients you can find in pre-workout supplements. This is because it’s capable of doing what AAKG isn’t reliable at doing – improving your muscle pumps in the gym.

That process raises your nitric oxide levels, leading to your body being able to pump more blood and oxygen into your muscles – making you look and feel as big as a motherf*cker.

So what does the ‘Malate’ do? Well, this is the Malic Acid that’s bound to the Citrulline. It raises your ATP levels slightly (in a similar manner to how Creatine Monohydrate works). So with Citrulline Malate, you get enhance muscle pumps and muscle endurance.

But we will note that Malic Acid hasn’t shown to be as effective as Creatine Monohydrate at boosting your strength and endurance. So in an ideal world, companies would add both of these nutrients into their pre-workout supplements.

Getting back to the point, Citrulline Malate is a great addition here. But the only issue is that you’re not shown whether there’s an optimal dosage in Warrior RAGE; its optimal dosage is 6,000mg per serving, so it’s unlikely t0 have been dosed well here.

Again, we’ll repeat that this is a big issue with companies adding proprietary blends into their products.

Even if you don’t know anything about supplements, there’s a chance that you’ve heard about Taurine before. This is because it’s commonly seen in energy drinks.

As it’s inside energy drinks, many mistakenly believe that it plays-a-part in boosting your energy. But Taurine isn’t a stimulant so it’s not capable of doing this.

So what does it do? Well, we could get into the whole science of Taurine, but you would get bored and click off this page. So the main benefit of Taurine is that it’s able to help prevent cramping.

For this reason, while Taurine is never an essential inclusion in any supplement, it certainly is a useful ‘bonus’ in Warrior RAGE.

While this is labeled as simply ‘Caffeine’, it’s actually ‘Caffeine Anhydrous’; the ‘Anhydrous’ means that Caffeine has been dehydrated into powder form so it can be added to supplements.

Now that you know this absolutely useless piece of information, we’ll get to the more useful points…

Basically, there’s no better stimulant than Caffeine Anhydrous to boost your energy levels in pre-workouts. It’s safe and effective, as long as it’s not consumed in massive dosages. As you’ll probably know, Caffeine can cause jittery side effects.

The bad news is that Caffeine is part of a proprietary blend of Warrior RAGE. So you’re not shown the exact amount of Caffeine that has been added to this pre-workout.

Ultimately, you’re risking suffering from jittery side effects when taking Warrior RAGE as a result. This is why we prefer knowing the exact dosage of ingredients inside supplements; we always make sure to consume under 200mg Caffeine Anhydrous per serving to stay safe. 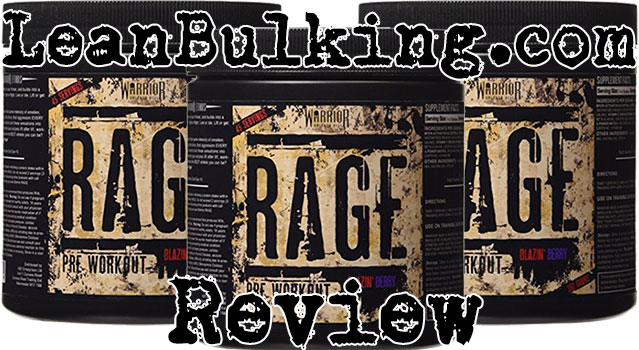 All of the problems with Warrior RAGE stems from the fact that it contains proprietary blends; as we’ve mentioned throughout this review, this means that you’re not shown the exact amount of each ingredient inside.

The main issue that comes with this is that Caffeine can cause jittery side effects in large dosages – especially if you’re tolerant to supplements.

Not only that, Warrior RAGE also contains Beta-Alanine, which can cause itchy & tingly skin (paresthesia).

Here are the potential side effects of taking Warrior RAGE:

Overall, Warrior RAGE would be a great pre-workout, especially for its price, if all of its ingredients weren’t hidden in proprietary blends. Remember that an ingredient is only as good as its dosage; you can have a great nutrient, but if it’s not dosed optimally then it won’t work.

Ultimately, the costs have most likely been cut on Warrior Rage by adding small dosages of each ingredient. This would mean that it’s not going to benefit your gym session very much; at best, you’ll probably feel a boost of energy from the Caffeine Anhydrous (in our honest opinion).

Warrior RAGE presents a great example of why we try to choose pre-workouts that don’t contain any proprietary blends.

It’s much better to pay a bit extra for a supplement that clearly shows you the exact dosages of ingredients, so you know you’re getting an effective supplement that’s good value for money.

For this reason, we don’t believe Warrior RAGE can compete with the highest rated pre-workouts available right now.