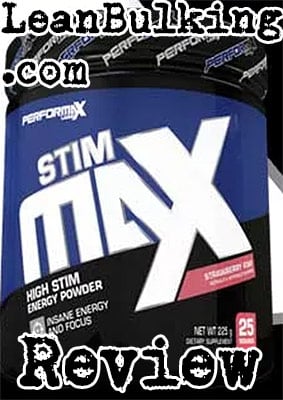 StimMax is a pre-workout supplement made by Performax. It comes in 25 serving containers, available in 2 flavors – raspberry lemonade and strawberry. ‘

From first glance, we’re glad that Performax have provided the exact dosages of each ingredient. We usually dislike when companies hide nutrients in proprietary blends, so this is a good thing.

But you should know that Performax StimMax is filled to the brim with stimulants; this means that it’s likely to cause jitters to those with a low tolerance to stimulants, but this should be clear from its name anyway.

We’ll analyze Performax StimMax’s nutrient profile for you in the next section. But first, we’ll tell you more about the company behind it.

Performax is a USA-based supplements company. They’re products are becoming more and more popular, building a name for making the ‘strongest’ products on the market.

This company sponsored some high-level athletes such as IFBB Pro’s Charles Dixon and Sarah Allen. But you’re here to learn more about Performax StimMax, so let’s see which ingredients have been added to this pre-workout below…

It contains 7 main ingredients, mostly compromising of stimulants (as its name suggests); this makes it unsafe for those with a low tolerance to Caffeine Anhydrous and other stimulants…

But then again, you won’t be interested in this product if you’re not looking for the ‘strongest pre-workout on the market.

Anyway, we’ll take you through each ingredient in Performax StimMax. By the end of this review, you’ll have a good idea of how safe and effective this pre-workout supplement really is.

It’s not good news that the highest dosed ingredient in Performax StimMax is potentially ineffective. Basically, Choline Bitartrate is supposed to increase energy levels and cognition, but there haven’t been enough studies to prove that it’s reliable (in our honest opinion).

Not only that, Choline Bitartrate is also infamous for causing your breath and sweat to smell fishy. This is a side effect officially known as Trimethylaminuria, which you can learn more about here: https://www.ncbi.nlm.nih.gov/pmc/articles/PMC3848652/

For these reasons, we don’t consider Choline Bitartrate to be a great addition to pre-workout supplements. We would have personally preferred to see something tried-and-tested to improve your performance in the gym, such as Creatine Monohydrate.

One thing about Caffeine Anhydrous is that it’s reliable. You simply can’t argue whether it works, because everyone knows that it does; any coffee lover will tell you this.

But the problem with Caffeine Anhydrous, is that it can cause jitters when consumed in very large amounts.

Everyone has a different tolerance to Caffeine, so if you consume more than 6 cups of coffee per day, you’ll be fine taking Performax StimMax. However, if you hardly ever consume caffeinated products, then you’re likely to be at risk from jittery side effects here (in our honest opinion).

In truth though, you shouldn’t be looking for a pre-workout labelled as ‘the strongest pre-workout on the market’ if you have a low tolerance to stimulants…So Performax StimMax haven’t done anything wrong here.

In case you’re wondering, this is another form of Caffeine. The addition of DiCaffeine Malate round up the total Caffeine content in Performax StimMax to 400mg per serving; this is double of what we usually recommend you to consume per serving, but remember that this has been made to be the ‘strongest pre-workout on the market’.

Again, we’ll repeat that you shouldn’t be consuming this product if you have a low tolerance to Caffeine and stimulants in general. In our honest opinion, Performax StimMax is only for those that consume over 5-6 cups of coffee per day and are looking for an extra-big ‘kick’ before their workout.

Eria Jarensis Extract is known for its ability to raise your dopamine and noradrenaline levels; this has a positive effect on your mood, helping you to feel happier.

This also makes Eria Jarensis Extract a useful relaxant. We believe that this is the real reason why Performax Labs has added this here, as StimMax contains an overload of stimulants (as its name suggests).

So to summarise, Eria Jarensis has been added in StimMax to try and keep you safe from jittery side effects. But we still wouldn’t advise those with a low tolerance to caffeine and other stimulants to take StimMax (although we don’t think anyone that doesn’t want to consume high amounts of stimulants to buy a product called StimMax anyway).

Dynamine is a patented stimulant, which adds to the overall stimulant content in Performax StimMax. This proves that this pre-workout will indeed be the ‘strongest pre-workout on the market’.

So in fairness, Performax Labs have achieved and delivered on their promises here.

Huperzine A is a known cognitive booster that will be able to increase your focus in the gym. But coffee drinkers will know that Caffeine Anhydrous is enough to raise your focus for the purposes of a gym workout anyway.

For this reason, we don’t believe that Huperzine A is a necessary addition here. Then again, it certainly makes a good ‘bonus’ in Performax StimMax – although we personally would have preferred Creatine Monohydrate (which is proven to enhance your strength & endurance).

Noopept is a patented version of N-phenylacetyl-L-prolylglycine ethyl ester. It’s believed to combat cognitive decline and improve your cognition as a result.

However, in our honest opinion, there needs to be more research carried out on this nutrient before we can consider it to be reliable.

Sceletium Tortuosum is a herb that’s traditionally been used to reduce anxiety. This leads us to believe that Performax has added this to StimMax to help keep the HUGE amount of stimulants safe for customers.

However, we personally wouldn’t recommend people with a low tolerance to Caffeine Anhydrous or other stimulants to consume this pre-workout.

But as we mentioned, StimMax is clearly advertised to those who drink more than 5-6 cups of coffee per day and want that extra ‘kick’. 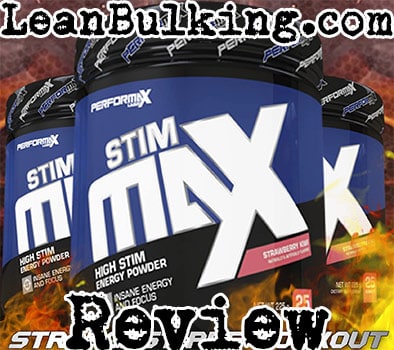 The main concern with Performax StimMax is the HUGE amount of stimulants. But we’ll remind you that you should be comfortable with overloads of stimulants when buying a pre-workout called ‘StimMax’.

If you are sensitive to stimulants, then you’ll be likely to suffer jitters and energy crashes (so we’ll list this as a potential side effect below).

Also, WebMD and other sites believe Huperzine A is capable of causing nausea, diarrhea, and high blood pressure.

Here are the potential side effects of taking Performax StimMax:

Performax StimMax is exactly what it’s advertised to be. It’s packed full of stimulants, which will give those with a very high tolerance to caffeine exactly what they need.

But if you don’t consume more than 6 cups of coffee per day, then you shouldn’t be consuming this pre-workout due to the risk of jittery side effects (in our honest opinion).

One small criticism from us is that Performax hasn’t added any ingredients capable of delivering other benefits apart from raises in energy and focus. For example, we would have liked to see Citrulline Malate, which is proven to enhance your muscle pumps while you lift weights.

Performax StimMax isn’t for everyone.

It’s only going to be beneficial for those with an extremely high tolerance to stimulants that need an extra ‘kick’.

For this reason, we don’t believe it can compete with the highest rated pre-workouts on the market.