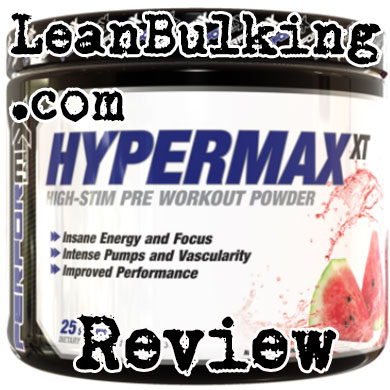 HyperMAX XT is a pre-workout supplement made by Performix Labs. It costs $34.99 for 25 servings and comes in 3 flavors – Watermelon, Blue Razz, & Strawberry Kiwi.

These sounds like tasty options, but we’re more interested in seeing which ingredients are inside HyperMAX XT; ultimately, this will determine how safe and effective this pre-workout is.

But first, let’s find out more about the company behind it.

Who are Performax Labs?

After clicking on their ‘about us’ page on Performax Labs’ website, we were faced with HUGE paragraphs of writing.

We won’t lie, we couldn’t be bothered reading it all, as it didn’t contain much valuable information such as the year this company were founded.

Not only that, we found it weird that they claim to cut the ‘BS’, but HyperMAX XT contains a proprietary blend, which we consider to be one of the biggest ‘BS’ in the industry.

Anyway, before we upset too many people, lets analyze the nutrients inside Performax Labs’ pre-workout in the next section below…

HyperMAX XT contains 13 ingredients overall, which we believe to be too many; usually, supplements containing over 10 nutrients are underdosed, so it’ll be interesting to see if this is the case for this pre-workout.

For this reason, we prefer products that contain under 10 ingredients, as this gives companies a better chance of dosing nutrients optimally – therefore creating a better product.

But one thing we don’t like about HyperMAX XT, is the fact that it contains a proprietary blend (we’ll expand on this below).

Proprietary blends are mixtures of numerous ingredients that’re only shown to you as 1 quantity. As you can see from the ‘Energy and Focus’ proprietary blend on HyperMAX XT’s ingredient list, the overall amount is 1,250mg – but you’re not shown the dosages of each ingredient inside such as Citrus Aurantium.

Anyway, we would both be here all day if we look at each ingredient inside HyperMAX XT. So we’ll analyze the most important nutrients for you, so you can see how safe and effective this pre-workout really is.

Beta-Alanine is one of the most controversial ingredients in the industry.

Here’s why; Beta-Alanine can enhance your muscular endurance, but it’s also known for causing a side effect called paresthesia (itchy & tingly skin).

As a result, you have to decide whether the benefit of Beta-Alanine is worth suffering its side effect. Ultimately, it’s a personal choice, but we try to avoid it.

L-Citrulline is one of the best nutrients you can find in pre-workout supplements. It’s proven to raise your nitric oxide levels, which enhances your muscle pumps in the gym.

However, you need to make sure that there’s an optimal dosage inside the supplement you’re interested in.

The good news is that Performax Labs have done a great job here by adding an optimal dosage of L-Citrulline in HyperMAX XT.

If we were being overly critical, we would say that Citrulline Malate is better, as this is proven to deliver improved strength and endurance. However, L-Citrulline is still a great addition to any pre-workout supplement.

Agmatine Sulfate is extracted from L-Arginine, but this isn’t a good thing; L-Arginine has a poor absorption rate, meaning it’s ineffective when orally consumed.

Anyway, we checked the science behind Agmatine Sulfate, and found that it was used to treat drug addition and reduce pain. These aren’t exactly key reasons why you’d buy a pre-workout supplement, so we don’t think that this is a necessary addition to HyperMAX XT.

The only good news it that Performax Labs haven’t added Agmatine Sulfate into their proprietary blend.

From now onward, every ingredient is part of Performax Labs’ proprietary blend titled ‘Energy and Focus’. Remember that you’re not shown the dosages of most ingredients inside, unless Performax Labs have provided you with this information.

Now, the only dosage that Performax Labs have provided is the Caffeine Anhydrous. However, we would have preferred is there were no proprietary blends in HyperMAX XT at all.

Anyway, we’ll still analyze the most important nutrients inside this blend for you.

L-Tyrosine is a brain booster ingredient that’s proven to enhance your cognition. For this reason, we consider it to be a key addition to a nootropic supplement.

We don’t believe that it’s necessary to have in HyperMAX XT, as there’s no need for improvements to your memory in the gym. But saying that, there’s also no negatives to having L-Tyrosine here either.

Performax Labs must know the dangers of adding Caffeine Anhydrous into a proprietary blend, as they’ve provided the exact dosage of this stimulant.

It’s good that you’re given the dosage of Caffeine in HyperMAX XT, but if Performax Labs know about the negatives of proprietary blends, we don’t understand why they added one into HyperMAX XT in the first place.

Not only that, Peformax Labs have added a HUGE 350mg dosage of Caffeine, meaning it’s been over-dosed. Ultimately, this means that you’re at risk of suffering from jittery side effects, which isn’t something you want.

For this reason, we advise you to avoid proprietary blends, and dosages over 200mg Caffeine per serving in pre-workout supplements.

Citrus Auratium is by far the worst ingredient inside HyperMAX XT.

Why? Because it’s commonly reported to cause numerous side effects due to containing high amounts of Synephrine.

In case you’re unaware, Synephrine has been banned in the USA, UK & Canada. But Citrus Aurantium passes through a legal loophole and is still allowed to be added into supplements for now.

Ultimately, we believe that this ingredient will be banned in the future. But for now, we can only advise you to avoid Citrus Aurantium Extarct.

When an ingredient includes ‘Vomit’ in it, it never sounds appetising…

But it’s even worst because Rauwolfia Vomitoria Extract has shown to cause numerous side effects. Your risk of suffering from side effects is increased, due to it being inside a proprietary blend, which is never good news.

Ultimately, this is a great example of why companies shouldn’t include proprietary blends in their supplements (or potentially harmful ingredients). 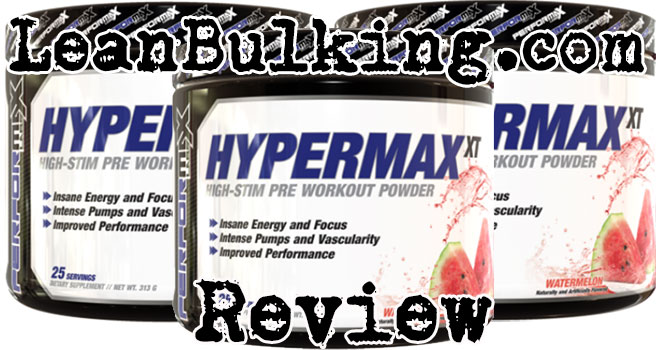 There are 4 things that can cause side effects in HyperMAX XT; Citrus Aurantium, Rauwolfia Vomitoria, Beta-Alanine and the HUGE 350mg of Caffeine Anhydrous.

In case you skimmed past the last section, Citrus Aurantium & Rauwolfia Vomitoria Extracts have commonly been reported to cause numerous side effects. While consuming over 200mg Caffeine per serving in pre-workouts, always puts you at risk from jittery side effects.

Here’s the potential side effects from taking HyperMAX XT:

As you can see from the potential side effects from taking HyperMAX XT, we don’t believe that this pre-workout can compete with the highest rated supplements on the market.

In fact, we never recommend products containing proprietary blends, as we believe that they’re one of the biggest gimmicks in the industry; companies can hide ineffective dosages inside these blends without you ever knowing.

The one good thing that Performax Labs have done with HyperMAX XT, is adding a good dosage of L-Citrulline. However, they haven’t added any other key pre-workout nutrients; instead, choosing numerous ingredients that have been reported to cause side effects.

HyperMAX XT has the potential to cause numerous side effects, without improving your gym session much.

For this reason, we believe that there’s better pre-workouts available.