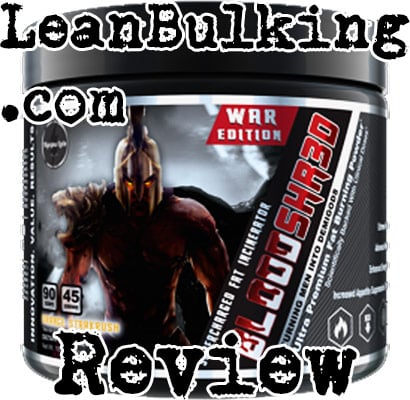 BLOODSHR3D is a fat burner supplement made by Olympus Labs. It costs $41.99 for 4 servings, with a serving size of 2 capsules per day.

This isn’t a great serving size, as studies show that 3-4 capsules spread throughout the day keeps your body fuelled in fat burning mode for longer.

As it’s in powder form, BLOODSHR3D comes in 3 flavors – Hawaiian Coolada, Orange Starkrush and Purple Bubblegum. Sounds pretty tasty, so we’ll analyze it’s safety and effectiveness in the next section.

But first, we’ll tell you more about the company behind it.

Who are Olympus Labs

Olympus Labs are a USA-based supplements company that are really raising their game to compete with the big boys of the industry. It’s always good to see other supplements than the usual Optimum Nutrition and MuscleTech, so we’re glad to see this happening.

We’re not sure what year this company was founded, as their ‘about us’ section simply gives you a paragraph of a fictional story, which gives you the reason for the name ‘Olympus Labs’.

But that doesn’t really affect the quality of their products. And you’re here to learn more about BLOODSHR3D, so let’s see which ingredients have been added below…

BLOODSHR3D contains 7 ingredients overall, which is a good number to have in a fat burner; from experience, we find that products containing more than 10 are usually under-dosed.

From first impressions, we’re happy with the nutrient profile of BLOODSHR3D. It contains some key fat burning nutrients such as Green Coffee Bean Extract, with Caffeine added to raise your energy levels during your cut.

But there are some problems that we have with BLOODSHR3D too; the dosage of Caffeine per capsule is slightly high, and it contains a proprietary blend (we’ll expand on this below).

Proprietary blends are mixtures of numerous ingredients that’re only shown to you as 1 quantity. As you can see from the ‘Extreme Energy, Focus & Thermogenic Matrix’ on BLOODSHR3D’s ingredients list, the overall amount is 300mg – but you’re not shown the dosages of each ingredient inside such as Eria Jarensis Extact.

Anyway, now that you know our first impressions of Olympus Labs’ fat burner, we’ll take you through each ingredient inside. By the end of this review, you’ll have a good idea of how safe and effective BLOODSHR3D really is. 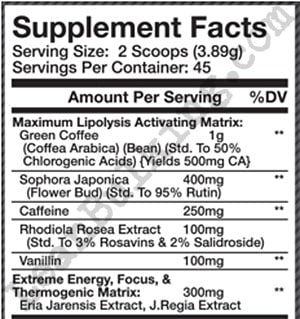 Great start by Olympus Labs, adding one of the key fat burning ingredients into their fat burner supplement.

Green Coffee Bean Extract works due to containing high amounts of Chlorogenic Acid. This has shown to be a reliable thermogenic that’s able to boost your metabolism and therefore promote fat loss.

More good news is that Olympus Labs have added an optimal dosage into BLOODSHR3D; studies show that you need at least 500mg of Green Coffee Bean Extract for it to work, and there is a big 1,000mg included here.

Also known as ‘Huaihua’, this is a herb that’s been traditionally used in Chinese medicine.

We’ll be honest and say that not much is known about this ingredient, so we’re glad that Olympus Labs have tried to stand-out from the crowd and add different nutrients into this fat burner.

However, from what we’ve seen, Sophora Japonica doesn’t seem to have any effect on fat loss. For this reason, we would have preferred to see something tried-and-tested instead, such as Green Tea Extract.

When it comes to raising your energy levels to give you that ‘kick’, there’s no better stimulant than Caffeine – just ask those who love coffee!

Caffeine has proven itself to be the safest and most effective stimulant on the market, which is why it’s one found in some of the most traded commodities in the world.

More importantly for supplements, adding Caffeine is great so customers can keep an eye on how much they’re consuming; most people should know their tolerance to Caffeine, so it’s important that they don’t consume too much and suffer jittery side effects.

We’re glad that Olympus Labs have displayed the exact dosage of Caffeine without adding it to any proprietary blends. But one small issue we have personally, is that BLOODSHR3D contains a slightly high dosage of Caffeine per capsule.

However, with a name like ‘BLOODSHR3D (War Edition)’, customers should be prepared for a hard-hitting product. So this fat burner isn’t for those with a low tolerance to stimulants.

Generally speaking, we always advise you to choose fat burners containing under 100mg Caffeine per capsule. This fat burner contains just over that at 125mg per capsule.

We consider Rhodiola Rosea to be a key addition to pre-workout supplements. But it’s still a very useful addition to a fat burner too.

Why? Because Rhodiola Rosea has shown to reduce muscular fatigue and damage, while being able to improve your focus too.

The bad news is that this ingredient hasn’t shown to be able to promote fat loss. But as we mentioned, due to being beneficial, we still believe Rhodiola Rosea is a useful ‘bonus’ to have in BLOODSHR3D here.

Now, it’s important to know that Eria Jarensis is one-of-two ingredients that have been added to the proprietary blend in BLOODSHR3D. This means that you’re not shown the exact dosage of either nutrients, which isn’t great when trying to determine their effectiveness.

So what does Eria Jarensis do? Well, it’s a stimulant that’s seen as a replacement for DMAA and Ephedrine (which have both been banned from use in supplements after causing harmful side effects).

While Eria Jarensis has shown to slightly promote fat loss, the issue we have personally, is that it’s also been reported to cause side effects; these include high blood pressue and rapid heartbeat.

As BLOODSHR3D already contains Caffeine, there’s simply no need for another stimulant here. Ultimately, we would have preferred Olympus Labs to have left out Eria Jarensis here.

In case you’re wondering, Juglans Regia is a species of walnut tree. It’s known to possess high amounts of DMHA (2-Aminoisoheptane), which in fairness has shown to promote fat loss.

But the problem we have with this, is that DMHA has also been reported to cause side effects, and is banned from competitive sports. This means that competitive athletes should stay away from both Junglans Regia Extract and DMHA.

We would have much preferred to see a key fat burning nutrient such as Green Tea Extract instead, which has proven to be both safe and effective. 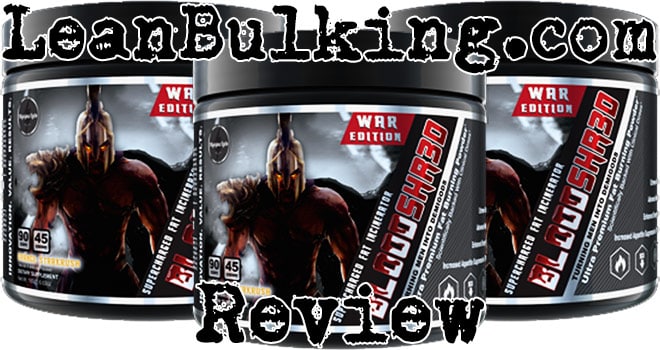 For the most part, BLOODSHR3D is a respectable and safe fat burner supplement.

Here’s the potential side effects from taking BLOODSHR3D:

Overall, it’s clear to see that Olympus Labs are a respectable supplements company that are trying to produce quality products. We especially like that they add unique nutrients to try and make their supplements stand out.

However, we would have preferred if they left out potentially harmful nutrients such as Eria Jarensis Extract.

We’re glad that BLOODSHR3D provides you with important information such as the exact dosage of Caffeine, and we’re happy that it contains Green Coffee Bean Extract.

But small issues such as the addition of potentially harmful nutrients mean that it can’t compete with the highest rated fat burners on the market.