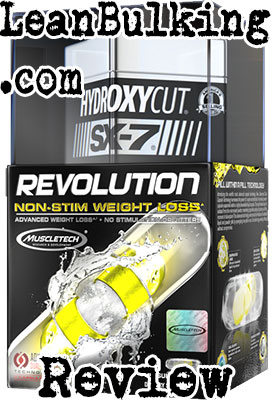 Hydroxycut SX-7 Revolution Non-Stim is a fat burner supplement made by MuscleTech. Judging by their other Revolution series of product, this is likely to cost around $80-$99, available exclusively on GNC.

Ultimately, this will make it one of the most expensive fat burners on the market.

It comes in 30 serving containers, with a serving size of 3 capsules; MuscleTech have clearly done their research here, as 3-4 capsule daily servings are optimal for keeping you fuelled up and burning fat throughout your day.

Anyway, well analyze Hydroxycut SX-7 Revolution Non-Stims nutrient profile - after telling you more about the company behind it.

MuscleTech are one of the big boys of the supplements industry, and chances are that youve already heard of it before. They were founded in 1998, and are a brand owned by a bigger company called Iovate Health Sciences Inc.

They even managed to sponsor Arnold Schwarzenegger at one point. But that deal was terminated by the legend in 2016.

Anyway, youre here to learn whether Hydroxycut SX-7 Revolution Non-Stim is worth trying out. So lets take a closer look below…

Hydroxycut SX-7 Revolution Non-Stim contains 10 ingredients overall; this is a good number to have, as we believe any more than 10 is unnecessary to have in a supplement.

However, its important to see whether these nutrients have been dosed optimally. From first glance, Hydroxycut SX-7 Revolution Non-Stim seems more like a nootropic supplement.

Why? Because it contains more ingredients proven to improve your cognitive than burn fat.

Well expand on this as we take you through each nutrient inside Hydroxycut SX-7 Revolution Non-Stim. This will allow you to see how effective this fat burner really is. 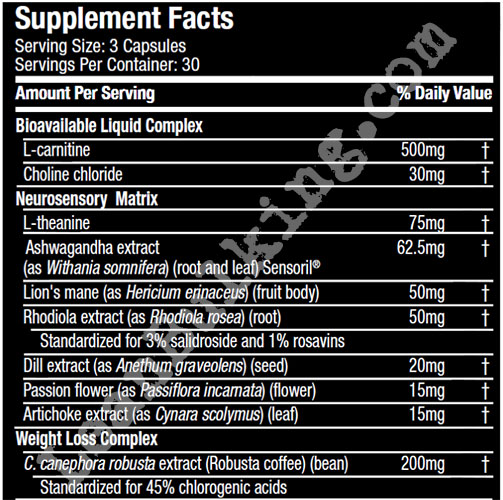 This compound is known for being able to improve your cognition, while reducing your muscle fatigue and damage.

For this reason, we consider L-Carnitine to be a key addition to any pre-workout supplement. However, its not as useful in a fat burner.

Why? Because studies show that L-Carnitine doesnt have a very big effect on fat loss (and this benefit may even be limited to older people).

Ultimately, we prefer to see this nutrient in a pre-workout. Personally, wed prefer to see ingredients such as Green Tea Extract instead in Hydroxycut SX-7 Revolution Non-Stim.

Were not sure why MuscleTech has added Choline into Hydroxycut SX-7 Revolution Non-Stim. Its basically a molecule believed to improve your cognition.

However, studies havent shown Choline to be very effective at delivering this benefit.

And thats not even the worst part; Choline has proven to cause your breath and sweat to smell fishy. So basically, Choline is an ineffective ingredient that wont help you on your fat burning journey - not what you want in a fat burner supplement.

Were a big fan of this ingredient when consumed alongside Caffeine. Simply put, L-Theanine works in synergy with Caffeine and is able to enhance the benefits of Caffeine, while reducing the risk of jitters.

However, as Hydroxycut SX-7 Revolution Non-Stim doesnt contain any Caffeine, theres not much need for L-Theanine to be here.

If this was a Nootropic supplement, then wed consider this as a key ingredient; studies have shown that L-Theanine is able to improve your cognition.

But as this nutrient doesnt have any effect on fat loss, L-Theanine isnt really needed here.

However, as Ashwagandha has no effect on fat loss, we dont believe that its necessary in Hydroxycut SX-7 Revolution Non-Stim.

You can see by the name of this nutrient that its a mushroom; also known as Yamabushitake, this has proven to be a very effective ingredient at improving your cognition.

As a result, we consider Lions Mane Mushroom to be a key addition to a nootropic supplement. However, this hasnt shown to promote fat loss, so we dont believe its needed in Hydroxycut SX-7 Revolution Non-Stim either.

Known as Rhodiola Rosea, this is another herb thats shown to enhance your cognition, while reducing muscle fatigue & damage. For this reason, we also consider Rhodiola Rosea to be a key ingredient in a pre workout supplement.

However, Rhodiola Rosea has no effect on fat loss either; this means that its also an ineffective nutrient in Hydroxycut SX-7 Revolution Non-Stim.

Dill Extract has traditionally been used to improve your intestinal health. However, were not sure why MuscleTech has added this into their fat burner, as it hasnt shown reliable signs of helping you burn body fat.

Ultimately, this is another ineffective ingredient that hasnt proven itself to be effective.

We had to do our own research, as theres not much study on this ingredient. We found that Passion Flower is able to reduce anxiety levels, so it might help you sleep.

However, while a reduction in stress is great for improving the quality of your life, its not going to directly impact how much body fat youll lose either. For this reason, wed rather have seen a nutrient thats proven to boost your metabolism.

Youve probably heard of this bulb vegetable before; its believed to slightly improve fat digestion and reduce your bad cholesterol levels.

However, the problem is that the studies show that Artichoke extract only works when consumed in dosages of 6,000mg. As Hydroxycut SX-7 Revolution Non-Stim only contains a tiny 15mg, its not likely to work.

Ultimately, this is a great example of why checking the dosages of ingredients is so important.

Finally, an ingredient worth talking about. Green Coffee Bean Extract is one of our favorite ingredients, as its proven to raise your metabolism - directly helping you lose body fat.

How does it work? Well, it contains high amounts of chlorogenic acid, which is known for being an effective thermogenic. Its dosed well, so you cant argue with that. 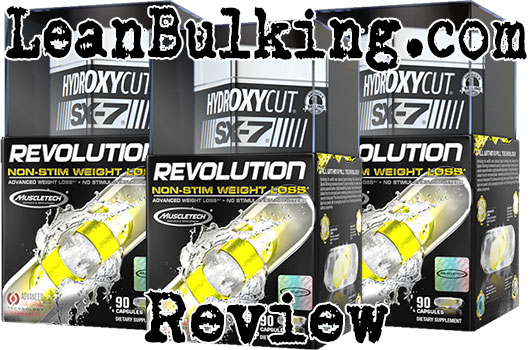 The good news is that none of the ingredients inside Hydroxycut SX-7 Revolution Non-Stim have been reported to cause side effects. That is one bonus of having a non-stim fat burner.

However, personally, we enjoy experiencing a raise in energy levels while we cut carbs and calories from our diet (in order to lose fat). But this is just personal preference, and we understand that some people would rather avoid stimulants altogether.

Its strange that the only tried-and-trusted nutrient inside Hydroxycut SX-7 Revolution Non-Stim is Green Coffee Bean Extract. For a company thats been around as long as MuscleTech, we would have thought that they wouldnt try and fix something that wasnt broken.

Nutrients such as Green Tea Extract have proven to boost your metabolism and promote fat loss for centuries, especially in East Asia. And its still effective now, so theres no need to add ingredients like Artichoke Extract instead (which simply isnt as reliable).

However, we can see why people would be interested in Hydroxycut SX-7 Revolution Non-Stim; its a non stim, so theres no risk of suffering from jitters or energy crashes here.

But well also point out that you only suffer from these side effects when consuming a fat burner thats overloaded with caffeine. If you consume under 100mg Caffeine per capsule with fat burner supplements; then youll benefit from raised energy levels while you cut calories & carbs, and also staying safe from jitters.

We understand that MuscleTech are trying new things and have added reliatively unproven nutrients.

Call us old fashioned, but well take the safe and effective nutrients such as Green Tea Extract, over the more recent additions such as Artichoke or Dill Extracts, which havent proven to be as reliable.

For this reason, we would personally choose one of the highest rated fat burners instead every time.