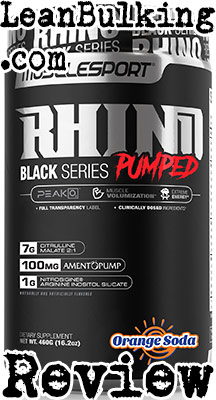 Rhino Black Pumped is a pre-workout supplement made by MuscleSport, priced at $64.99 (for 20 serving containers, if you want optimal dosages).

It comes in 3 flavor choices; Pineapple, White Monster, and Orange Soda. We weren’t quite sure what White Monster flavor was, so we chose Orange Soda, because who doesn’t like that?

Did it taste good? Well, it wasn’t the worst tasting pre-workout we’ve tasted, but it also wasn’t the best. But saying that, we were more interested in the results than just the taste.

Anyway, we’ll take you through Rhino Black Pumped’s nutrient profile after telling you more about the company behind it.

*UPDATE* A reader called Sam claimed to have received some feedback about this review from top management of MuscleSport:

“That’s what I got from top management of @musclesport: ‘Sam Zeldo on that website? Lmfao…that website ripped apart our Rhino Black Pumped for not having stimulants in it….it’s literally a stim free version of Rhino Black. I’m not sure who runs that website but it’s probably someone in the basement of their mother’s house'”.

We always check a supplement company’s website to try and learn more about them. However, on this occasion, there wasn’t much information available.

Why? Because we usually look for when the company was founded etc, but this information was nowhere to be seen on MuscleSport’s website.

However, you’re here to read about whether Rhino Black Pumped contains safe and effective ingredients. So let’s get to the ‘main course’ below…

After reviewing dozens of products, we’ve realized that the best supplements contain under 10 ingredients as long as they’re optimally dosed. So we were pretty surprised to see that Rhino Black Pumped contains over 20 nutrients.

Another potential problem is that MuscleSport has given you the option of using this pre-workout for 40 or 20 servings. However, we realized that if you use Rhino Black Pumped for 40 servings, then you won’t consume an optimal dosage of Citrulline Malate, which is an effective nutrient at helping to deliver enhanced muscle pumps.

Anyway, we’ll explain everything in more detail while we take you through each ingredient inside Rhino Black Pumped – so you can see how effective this pre-workout really is.

Peak02 is a patented blend of nutrients (pretty much a proprietary blend that’s been patented and branded under this name). So, you don’t know the exact dosages of ingredients in here.

The only thing you know is which ingredients are inside, and the overall quantity of this blend (500mg with the ‘half scoop’ or 1,000mg for the ‘full scoop’).

Anyway, this seems to be a blend that contains mostly ingredients aimed at improving your cognition. In fact, PeakO2 contains Lion’s Mane Mushroom, which is a key Nootropic ingredient – but it isn’t needed in an effective pre-workout supplement, in our honest opinion.

Right, so we just told you that the ‘PeakO2’ blend contained nootropic nutrients. Well, L-Tyrosine is another ‘brain-booster’ that has shown to improve your memory and focus; this is why we consider L-Tyrosine a key nootropic ingredient.

Again, Alpha-GPC is another ingredient shown to boost your cognition. However, we don’t recommend you to consume this nutrient, as it can cause side effects (we’ll explain in more detail in the side effects section later on).

We always say that Choline is one of the worst ingredients you can find in any supplement.

Why? Because it has been linked with causing your breath and sweat to smell fishy. There haven’t been enough studies to really prove this improves your gym session, in our honest opinion.

As a result, we don’t consider Choline Bitartrate to be a key addition to a pre-workout supplement.

Citrulline Malate is one of our favorite pre-workout ingredients; it’s proven to raise your nitric oxide levels, which increases your blood flow and enhances your muscle pumps in the gym.

How does it work? Well, it converts into L-Arginine once in your kidneys (which delivers the benefits outlined above).

So why not take L-Arginine directly? Because L-Arginine has a poor absorption rate when orally supplemented, meaning it’s useless when consumed in supplements.

This is why Citrulline Malate is the king of ingredients when you’re looking to improve your muscle pumps.

However, studies have shown that Citrulline Malate only works when consumed in dosages of 6,000mg or higher. This means you’ll have to take the 20g serving sizes to consume the optimal dosage of this nutrient (which means you’ll have paid $64.99 for 20 servings, which makes Rhino Black Pumped one of the most expensive pre-workouts we’ve reviewed).

Betaine has also been linked to causing fishy body odor; this is a side effect known as ‘Trimethylaminuria’ and you can see the study here: https://www.ncbi.nlm.nih.gov/pmc/articles/PMC3509925/

Now, this product contains less than the 2g that the subject in the above study was consuming when suffering from fishy body odor. However, the study concluded that the safety limit to avoid this was 100mg 2 times per day; MuscleSport Rhino Black PUMPED contains 1.5g per serving (when taking the ‘full scoop’), which might put you at risk from this.

As a result, we do prefer to avoid Betaine when possible. But we do also know that others enjoy consuming this and have seen positive results – it’s up to personal preference.

This is a patented form of Inositol Stabilized Arginine Silicate. It’s believed to enhance sporting performance (and blood flow) and there are a few studies that show it works.

In our honest opinion, Citrulline Malate is the best ingredient when it comes to improving blood flow and muscle pumps. As MuscleSport Black Rhino PUMPED already contains an effective dosage of Citrulline Malate in the ‘full scoop’, it’s likely to work regardless.

Taurine is an organic acid that contains sulfur – not bull urine, like some people think. Also, this hasn’t shown to raise your energy levels either, so we can put that myth to bed (some believe that Taurine is a stimulant, as it’s found inside energy drinks).

So what does it do? Well, Taurine has shown to help reduce cramping.

Although this can be useful, you can achieve the same benefit by keeping yourself hydrated by drinking healthy amounts of water. For this reason, Taurine is a ‘bonus’ ingredient, rather than a key one.

Agmatine Sulfate is derived from L-Arginine through a process called decarboxylation. Instead of boring you about this chemical process, we’ll get to what you want to know.

Simply put, as this is derived from L-Arginine, it’s not likely to be effective in our honest opinion ( L-Arginine might have poor absorption rate when orally supplemented).

For this reason, we prefer pre-workouts that don’t contain L-Arginine or any derivatives of it.

This is an amino acid that plays an important role in the Urea cycle. But all you need to know is that it can reduce elevated ammonia levels when orally supplemented.

However, this isn’t a benefit you need, unless you have an extremely rare syndrome where your body doesn’t regulate ammonia levels after consuming large amounts of protein.

For this reason, we consider L-Ornithine to be an unnecessary addition to any pre-workout supplement, and in Rhino Black Pumped (our honest opinion).

Glycerol is believed to help enhance your muscle pumps by helping your body digest dietary fat. However, there haven’t been any reliable studies that prove Glycerol actually works in our opinion – so it might be an unreliable ingredient in Rhino Black Pumped.

This is the first time that we’ve seen this ingredient in any supplement. If you’re wondering what it is, Selaginella Tamariscina is basically a species of plant that’s native to China, India, Korea, Japan and other countries around that area.

It’s believed to deliver many benefits, such as fat loss, increased strength, and elevated endurance – but we don’t believe that there have been enough studies proving that Selaginella Tamariscina actually works (just our honest opinion).

Ultimately, Selaginella Tamariscina might be an unreliable ingredient. We would have preferred to see a tried-and-tested nutrient such as Creatine Monohydrate in Rhino Black Pumped instead.

If you’re wondering what this is, Vanadyl Sulfate is an inorganic form of Vanadium (a unique trace mineral naturally found in foods such as shellfish).

What does it do? Well, it’s believed to help regulate your blood sugar levels, but this isn’t a benefit that’s needed in pre-workout supplements. If you’re looking to lose body fat, then an effective fat burner is what you want.

Anyway, the bottom line is that Vanadyl Sulfate isn’t really needed in Rhino Black Pumped in our honest opinion. 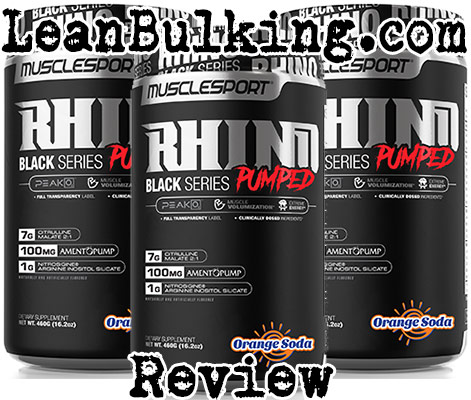 There are 2 ingredients that have been reported to cause side effects in Rhino Black Pumped; Betaine and Choline.

In case you skimmed past our ingredient section, Choline and Betaine might cause your breath and sweat to smell fishy after being orally consumed.

For this reason, we usually avoid pre-workouts that contain these ingredients. But at the end of the day, Betaine and Choline aren’t going to kill you either.

Here are the potential side effects from taking Rhino Black Pumped:

Ultimately, this is a pre-workout that offers 20 servings for $64.99; Rhino Black Pumped doesn’t contain many key pre-workout ingredients that are actually shown to work, in our honest opinion.

However, the positive is that this pre-workout contains a key ingredient – Citrulline Malate (which is only beneficial if you take the big 20g servings of Rhino Black Pumped). They’ve also offered an optimal dosage with their ‘full scoop’, so you have to give them credit for this.

However, we do believe that you can get much better value for your money by looking elsewhere.

Rhino Black Pumped will make your breath and sweat smell fishy, but it won’t really improve your gym session.

For less than $64.99, you could get a much better deal with other pre-workout supplements.

3
Check Out The Best Pre-Workouts This Year!