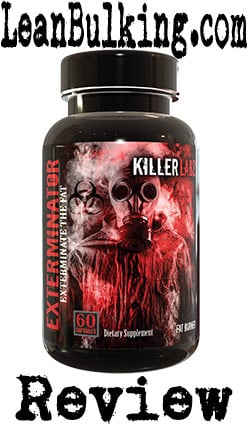 Exterminator is a fat burner by Killer Labz. It costs $44.99 for 45 servings per bottle, and has a serving size of 1 capsule per day.

We prefer fat burners that offer 3-4 capsules spread throughout your day, so your bodys always topped up with fat burning nutrients. The only 1 serving supplements on the market should be pre-workouts.

Who are Killer Labz?

Killer Labz are a supplements company based in the USA. They take pride in offering strong products, however, the ingredients list for Exterminator might show theyve gone too far.

Lets take a further look at whats inside.

Exterminator by Killer Labz contains 7 ingredients - this is a good number of ingredients to have in a product, but the problem is that theyre all part of a proprietary blend.

Proprietary blends are mixtures of numerous ingredients thatre shown to you as one quantity (in this case, 615mg).

This is bad, as no-one knows the exact dosages of each ingredient inside - and as caffeine can cause jitters and energy crashes in dosages over 200mg per capsule, Exterminator puts you at risk of suffering side effects. 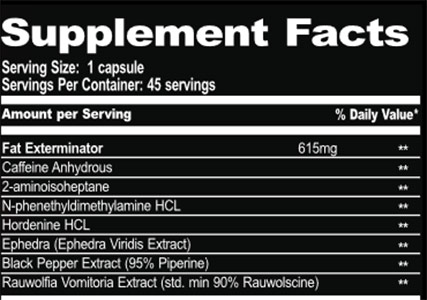 When dosed correctly, Caffeine is one of our favorite fat burning ingredients. Basically, its shown to raise your metabolism and can provide energy boosts when youre cutting calories.

So whats the best dosage? Well, we like to consume 70-75mg Caffeine per capsule in a fat burner (the best fat burners come in daily servings split into 3-4 capsules per day).

This is a problem, as Exterminator only provides one capsule per day. As the overall quantity of the Fat Exterminator proprietary blend is 615mg, theres a chance theres over 200mg caffeine in one serving, which can cause jitters or energy crashes.

The point is, no-one knows the dosages of ingredients inside proprietary blends, so youre putting yourself at risk here.

Also known as DMHA, soccer fans in England will know this due to Mamadou Sakho being banned for taking this ingredient.

Basically, DMHA is banned in competitive sports - so you should stay away if youre a high-level athlete.

Also known as DMAA, its believed to provide energy boosts similar to caffeine. However, heres the problem: DMAAs shown to raise blood pressure when consumed with caffeine.

As Exterminator contains both DMAA and Caffeine, youre at risk of suffering from this side effect.

Hordenine is believed to promote fat loss and energy levels. However, no studies have proven it to work.

Not only that, its been reported to cause numerous side effects (see section below for more info).

This is one of the most concerning ingredients inside Exterminator. Basically, Ephedra is extracted from Ephedrine (Ephedrines been banned for causing harmful side effects, but Ephedra has been overlooked so far).

For this reason, companies are still able to include Ephedra in their supplements - and with people looking for the strongest ingredients available, this looks good to them (but its not worth suffering side effects for, especially as theres better options available).

This is a bonus ingredient, rather than a key one. Simply put, Black Pepper Extracts shown to improve the absorption rate of ingredients its consumed with.

However, its not a miracle pill - so it wont make bad ingredients good. As most ingredients in Exterminator are bad, theres not much use for Black Pepper Extract here.

Also known as Indian Snakeroot, this plant is used to treat insomnia, high blood pressure and mental disorders. However, its been reported to cause numerous side effects (see section below for more info). 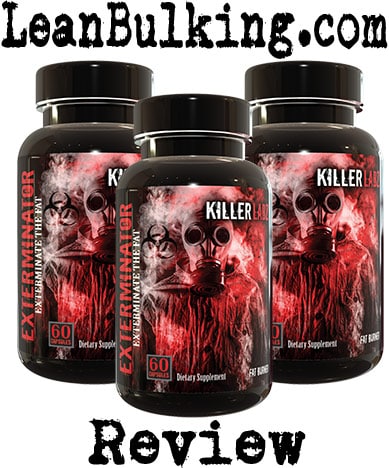 Exterminator contains numerous ingredients that can cause side effects. Even Caffeine, which is very safe when you know the exact dosage youre consuming, is bad here as its part of a proprietary blend (meaning youre not shown its exact dosage).

Basically, this is exactly the type of fat burner we avoid - weve experience bad side effects from consuming ingredients in Exterminator, and never recommend anyone to take them.

Heres the potential side effects from taking Exterminator:

Ultimately, Exterminator theres only 1 key fat burning ingredient inside, which is Caffeine. The rest are reported to cause harmful side effects, and we recommend staying away from them - especially Ephedra, Rauwolfia, and Hordenine.

Even Caffeine in Exterminator can cause side effects, as its in a proprietary blend (meaning there could be a dosage higher than 200mg per capsule inside Exterminator). In fact, we refused to try this fat burner as we didnt want to experience any side effects listed above.

For this reason, we cant give Exterminator more than 1 star. We recommend taking a look at our Top 3 Fat Burner Supplements Page - to see the safest and most effective products on the market.