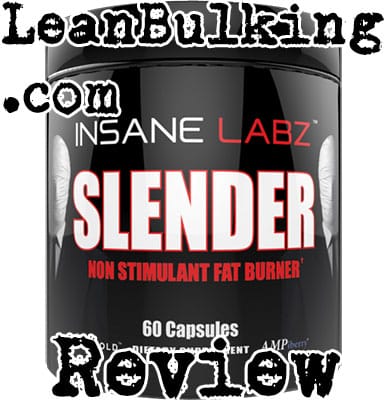 Slender is a fat burner made by Insane Labz. It costs $44.95 for 30 serving containers, with a serving size of 2 capsules per day; this isn’t a good serving size, as studies have shown 3-4 capsules daily to be optimal at keeping your body fuelled with nutrients all day.

Insane Labz have jumped on the bandwagon of increasing non-stimulant products with Slender.

We believe this rise is a result of companies adding large dosages of caffeine into their supplements. But as long as you consume under 100mg Caffeine per capsule with fat burners, you’ll be safe from side effects while experiencing a stable boost in energy levels.

Anyway, we’ll analyze Insane Labz Slender’s nutrient profile for you in the next section. But first, we’ll tell you more about the company behind it.

Insane Labz are a USA-based supplements company that’ve gained a good reputation from their pre-workouts. While they’re not as well known for their testosterone boosters and fat burners, they do still produce them.

But one thing we don’t like about this company, is that they add every ingredient in every product into proprietary blends (we’ll explain why in the next section).

As you’re here to learn more about Insane Labz Slender, let’s stop wasting time and get into this review below…

Insane Labz Slender contains 8 ingredients overall; this is a good amount to have in a supplement, as we know from experience that supplements containing too many nutrients are usually under-dosed.

But the problem here is, every ingredient is part of a proprietary blend. So you’re not shown the dosages of each ingredient inside Insane Labz Slender anyway (we’ll expand on this below).

Proprietary blends are mixtures of numerous ingredients that’re only shown to you as 1 quantity. As you can see from the ‘Slender Blend’ on Insane Labz Slender’s ingredient list, the overall amount is 725mg – but you’re not shown the dosages of each ingredient inside such as Raspberry Ketones.

Anyway, now that you know why we don’t really like proprietary blends, we’ll take you through each ingredient inside Insane Labz Slender.

By the end of this review, you’ll know exactly how safe and effective this fat burner really is. 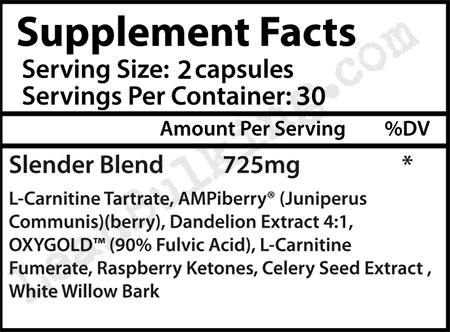 This is probably the most common form of L-Carnitine you’ll find; it’s proven to reduce muscle fatigue and damage, while increasing your focus in the gym.

For this reason, we consider L-Carnitine Tartrate to be a key addition to a pre-workout supplement. But remember that this is a fat burner supplement.

There are different forms of L-Carntine, with Acetyl-L-Carnitine being the best for promoting fat loss. The bad news is that L-Carnitine Tartrate hasn’t been shown to be very effective at helping you lose fat.

So while it’s still the best ingredient inside Insane Labz Slender, it’s not the best; we would have preferred to have seen a tried-and-tested nutrient such as Green Tea Extract instead here.

In case you’re wondering, this is the same stuff you’ll find in your gin and tonic. It’s great for delivering antioxidants and enhancing the taste of your alcoholic beverage, but that’s about it.

Unfortunately, Juniper Berry hasn’t shown to have any impact on your fat loss journey at all. So it’s a good ‘bonus’ addition, but Insane Labz should have made sure they added key nutrients first.

You might be wondering why Dandelion Extract has been added into Insane Labz Slender. But companies add this ingredient as it’s a diuretic, meaning it’s able to effectively dehydrate you – helping bodybuilders get ‘drier’ on stage.

So what’s the problem? Well, Dandelion Extract can cause serious dehydration if the consumer doensn’t know that it’s a diuretic; as Insane Labz haven’t mentioned this in their product description, we’re assuming that not many people will know.

For this reason, we consider Dandelion Extract to actually be a risk here. And it can even fool people into thinking their losing weight, when really it’s simply water weight that they’ll pack back on after they stop consuming Dandelion Extract.

Remember that we mentioned there’s many different forms of L-Carnitine? Well, this is another one.

The worst thing is, not much is known as L-Carnitine Fumerate, so nothing has been proven – making it an unreliable ingredient.

Ultimately, when you’re buying a supplement, you want guaranteed results. Unfortunately, L-Carnitine Fumerate might not help you achieve your fitness goals.

If there’s one ingredient that we don’t like, then it’s Raspberry Ketones; it gained media attention for being some kind of ‘miracle’ ingredient for fat loss.

Since then, companies latched onto this and began adding Raspberry Ketones into their supplements to fool customers. However, studies have proven that this doesn’t promote fat loss at all.

Not only that, Raspberry Ketones are chemically treated with Synephrine, so it comes with the risk of side effects too. For this reason, we advise that you try to avoid this ingredient when you can.

Not much is known about Celery Seed Extract, but it’s believed to have antioxidant properties due to containing Sedanolide. It’s also been traditionally used as a diuretic too.

Ultimately, this adds to your risk of becoming seriously dehydrated. Again, we would have preferred to see a key ingredient proven to promote fat loss, such as Green Tea Extract instead.

White Willow Bark Extract is always a strange addition to any supplement, as it’s mainly used as a painkiller; it’s also suggested that it can replace aspirin in certain things as a result.

For this reason, we don’t consider this to be a necessary addition to Insane Labz Slender here. 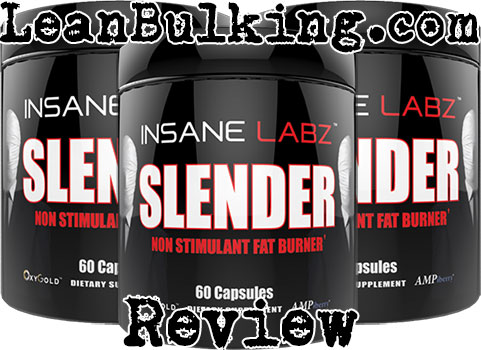 The main concern we have with Insane Labz Slender, is that it contains Dandelion Extract and Celery Seed Extract; these are both diuretics, which can cause serious dehydration to those who aren’t aware they’re diuretics.

As Insane Labz don’t clearly state that it contains diuretics, we believe that this is a possibility.

Not only that, Insane Labz Slender contains Raspberry Ketones, which has been chemically treated with Synephrine – this means it can cause side effects that we’ll bullet point below.

Here’s the potential side effects from taking Insane Labz Slender:

Ultimately, we feel that this review has been quite critical.

But we’ve been as fair as we can be; Insane Labz doesn’t contain any key fat burning nutrients proven to work, and can even put you at risk of side effects.

If it had contained ingredients such as Green Tea Extract and Cayenne Pepper Extract, it would have been a much more positive review.

However, we can’t recommend Insane Labz Slender to you, as we don’t believe it’s likely to help you burn fat.

Insane Labz Slender doesn’t contain the necessary nutrients to promote fat loss, but can put you at risk from side effects (in our honest opinion).

For this reason, we don’t believe that it can compete with the highest rated fat burners available right now.