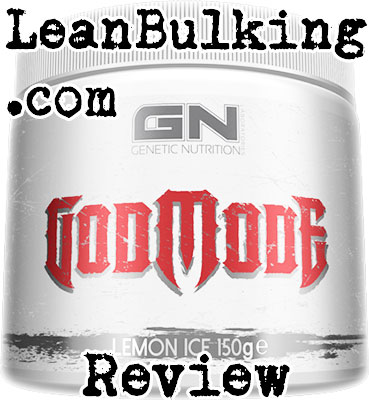 GodMode is a pre-workout supplement made by GN Labs. We found this product on amazon and other online retailers for the price of 39.90 EURO ($46.50/£35.80) - and the only flavor we found was Lemon Ice.

However, what we found strange was that GodMode came in 15 serving containers; usually, pre-workouts come in containers of 20-30 servings. So 15 servings, $46.50 is quite a big price tag.

Anyway, well look at the nutrient profile of GN Labs pre-workout - but first well tell you about this company (in case you dont know who they are).

Who are GN Labs?

GN Laboratories are a supplements company based in Germany. We like that their products are made in cGMP certified facilities, but they only deliver their products from Germany (this means people in USA might have to wait a week or more to get their order).

There wasnt much more information on their about us section - so we couldnt find out when GN Labs were founded.

But what were most interested in, is whether GodMode contains safe and effective ingredients. So lets take a look in the section below…

As we bullet pointed at the start of this review; one thing we really dont like about GN Labs GodMode, is that every ingredient is part of a proprietary blend (well explain what these are, are why theyre bad below).

Proprietary blends are mixtures of numerous ingredients thatre only shown to you as 1 quantity. As you can see from the GodMode stim blend on this pre-workouts ingredient list, the overall amount is 2,050mg - but youre not shown the dosages of each ingredient inside such as Caffeine.

Right, so now you know what proprietary blends are, and why companies shouldnt use them - well take you through each ingredient inside GN Labs GodMode (so you can see how effective this pre-workout really is). 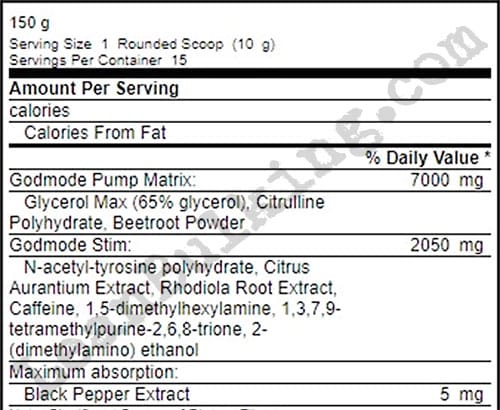 We dont believe Glycerol should be used in supplements. Why? Because its used in products such as soap and antifreeze…not something that wed want to put into our body.

Why is it used in supplements? Answer: its believed to improve your endurance when supplemented, but no studies have proven this (making Glycerol unreliable).

This is an ingredient we hadnt seen before. And after more research, we believe Citrulline Polyhydrate has been created by GN labs (as its not in any other supplements).

Does it work? Well, we know that Citrulline can enhance your muscle pumps, but theres been no official studies proving whether Citrulline Polyhydrate is effective.

For this reason, we have to consider this as an unreliable ingredient.

Beetroot is a popular vegetable in salads and even sandwiches. But its more beneficial than you think; Beetroot has shown to increase your nitric oxide levels, leading to enhanced muscle pumps in the gym.

Good addition by GN Labs here. However, as its hidden in a proprietary blend - no-one knows whether Beetroot Powder has been dosed optimally (so it might not work).

Also known as Synephrine; this chemical is banned in numerous countries (such as the UK & Canada) after causing harmful side effects.

Not only that, Citrus Aurantiums main benefit is promoting fat loss. As this isnt a direct benefit of taking a pre-workout, we believe this to be an unneeded ingredient in GN Labs GodMode.

If youre looking for a supplement to help you shred fat - then a fat burner supplement is better for the job.

Anyway, we mentioned that Citrus Aurantium can cause numerous side effects. Well, this risk is only increased due to it being part of a proprietary blend.

This is a key pre-workout ingredient; Rhodiola Rosea is a herb thats proven to reduce fatigue while improving your focus in the gym.

But theres a problem - as its part of a proprietary blend, there might not be an effective dosage of Rhodiola Rosea to work.

Ultimately, this is another example of why we dont like proprietary blends; you should always know the exact dosage of every ingredient inside supplements (so you can see whether youre getting the best value for money).

Caffeine is the best stimulant you can find in a supplement - when its dosed sensibly (under 200mg per serving). Its proven to increase your strength, endurance, focus and energy levels in the gym.

However, as its part of a proprietary blend, there might be an overdose of Caffeine here. Simply put, if you consume over 200mg Caffeine per serving, youre at risk of side effects such as jitters and energy crashes.

For this reason, its always better to know the exact dosage of Caffeine in supplements - so you stay safe and avoid side effects.

Also known as DMHA, this is another stimulant thats believed to improve your energy levels (like Caffeine). However, its not been researched much - making DMHA an unreliable ingredient.

Not only that; DMHA has been reported to cause numerous side effects, making it potentially harmful too. For this reason, we try to avoid supplements containing DMHA.

This is the fancy name for Caffeine. But this is a bad thing - were not sure why GN Labs has added Caffeine to GodModes ingredient list twice…

We believe that GN Labs has done this, as GodMode is likely to contain an overload of Caffeine (over 200mg per serving); ultimately, this would cause side effects such as jitters or energy crashes.

For this reason, we recommend consuming under 200mg Caffeine per serving in supplements - so you stay safe from side effects.

You might recognize this ingredient by its more common name - DMAE.

What does it do? Well, its believed to improve your cognition. This might seem good, but it can cause a serious side effect you might want to avoid…

Simply put, DMAE has shown to be teratogenic in numerous studies (meaning it can cause birth defects in unborn babies).

For this reason, we advise you to avoid this ingredient; Caffeine offers enough boost in focus to improve your gym session.

Youve probably sprinkled Black Pepper onto your food at some point in your life. In fact, Gordon Ramsay loves this ingredient (if youve ever seen Hells Kitchen or memes on Facebook….)

Anyway, its more beneficial than you think; simply put, Black Pepper Extract can improve your digestion and the absorption rate of other ingredients its consumed with.

For this reason, its a great bonus ingredient. But its not really a key fat burning ingredient either 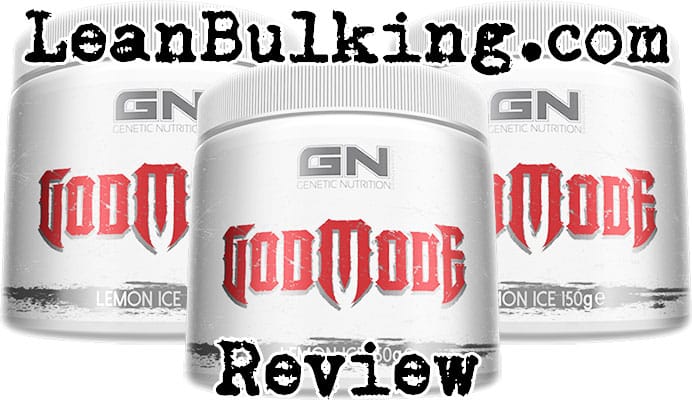 There are 3 things in GN Labs GodMode that can cause side effects; Citrus Aurantium (Synephrine), DMAE, and the overload of Caffeine.

Heres a quick summary - Citrus Aurantium has been banned in numerous countries after causing harmful side effects (which well bullet point below).

Not only that, DMAE has shown to be teratorgenic - meaning it can cause birth defects in unborn babies. And finally, consuming dosages over 200mg Caffeine per serving causes jitters and energy crashes.

Heres the potential side effects from taking GN Labs GodMode:

As you can see from the potential list of side effects above - we cant recommend this pre-workout to you.

In fact, we never recommend you to consume supplements that contain any proprietary blend. And as GN Labs GodMode contains 2 proprietary blends, youre at an increased risk from suffering side effects here.

Ultimately, the best pre-workouts on the market contain 100% natural ingredients and sensible dosages of Caffeine - without any potentially harmful chemicals such as Citrus Aurantium or DMAE.

For this reason, GN Labs GodMode cant compete with the highest rated pre-workouts that cost almost the same price.

For the same price, you can get much better pre-workout supplements.

For this reason, GN Labs isnt worth your money, and isnt good value for money either. Not only that, it can cause numerous side effects - something you want to avoid.