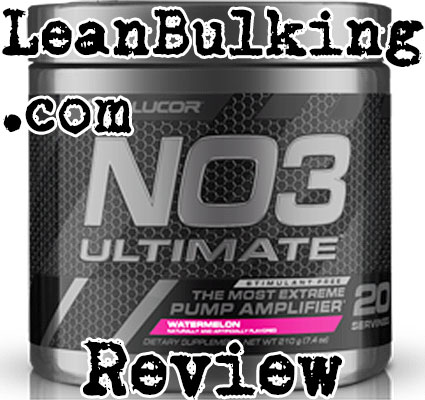 NO3 Ultimate is Cellucor’s pre-workout released in 2017. It’s priced at $39.99 for 20 servings, which means it’s competing with the highest rated pre-workouts on the market (as they come with similar price tags).

It comes in 3 flavors – Blue Raspberry, Fruit Punch, and Watermelon. However, we’re not sure why it costs so much – because Cellucor NO3 Ultimate is only designed to improve your muscle pumps in the gym.

While this is a great benefit, we also enjoy experiencing other advantages such as; energy boosts, improved endurance and strength when taking these types of supplements.

As most other pre-workouts offer these other benefits too (at the same price), we’ll start by saying that Cellucor NO3 Ultimate doesn’t seem like great value for money. But we’re going into this review with an open mind, and we’ll let you know our final thoughts in our conclusion.

But first, we’ll tell you a bit about the company behind this pre-workout (for those new to supplements).

Cellucor are a supplements company that was founded in 2002, based in Bryan, Texas (USA). Since then, they’ve become one of the leading sports nutrition brands; Cellucor has built a strong reputation for their pre-workouts (epecially their C4 series).

For this reason, we were always expecting big things from their release in 2017 – No3 Ultimate.

Anyway, this is pretty much all you need to know; you’re here to learn more about Cellucor NO3 Ultimate, and that’s exactly what we’ll give you below.

We always say that our ingredients section of reviews is the ‘main course’. Why? Because the ingredients determine how effective a product is – you can’t hide from the facts and scientific evidence that we use.

As we’ve already mentioned; after taking a look at Cellucor NO3 Ultimate’s nutrient profile, we were surprised to see only ingredients aimed at enhancing your muscle pumps.

Personally, we buy pre-workouts hoping to achieve these other benefits – improved strength, endurance and (maybe most importantly) energy boosts). As there’s no ingredients proven to raise your energy levels, you’ll still struggle after a long day at work with Cellucor NO3 Ultimate.

Anyway, we’ll take you through each ingredient inside this pre-workout – so you can see exactly how effective it is. 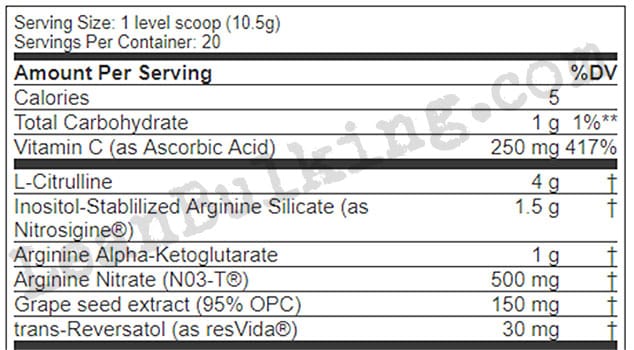 L-Citrulline is a great ingredient in pre-workout supplements; it’s shown to enhance your muscle pumps in dosages above 3,000mg per serving.

As Cellucor NO3 Ultimate contains 4,000mg L-Citrulline per serving, it’s been dosed optimally here. So this gets a strong approval from us, here at LeanBulking.com (you’d be surprised at how many companies under-dose ingredients).

However, as this is a review, we’ll offer a personal criticism; we prefer Citrulline Malate (which is L-Citrulline mixed with Malic Acid). Why? Because Citrulline Malate has shown to be more effective at enhancing your muscle pumps, while also offering the added benefit of improved strength too.

If you’re looking for Citrulline Malate in supplements, then its optimal dossage is 6,000mg per serving. But as we mentioned, L-Citrulline is still a good addition to Cellucor NO3 Ultimate.

This is a patented form of Inositol-Stabilized Arginine Silicate under the name of ‘Nitrosigine’. But there’s one problem here; this ingredient hasn’t shown to be effective in any study – making it unreliable.

*Disclaimer: we did find 1 study, but this was conducted by ‘Nitrosigine’, so we can’t trust this study (we only trust completely non-bias scientific evidence, as companies can pay for studies and only show the positives. Remember, companies can’t lie, but they can withhold information they don’t want you to see).

Anyway, what we told you above is sadly true. And until we see a non-bias study with Inositol-Stabilized Arginine, we’ll always consider Nitrosigine to be an ineffective ingredient in supplements.

Also known as AAKG, this is the salt from Arginine and Alpha Ketoglurate Acid. It’s believed to enhance your nitric oxide levels (which would increase blood flow and improve your muscle pumps).

However, there’s one problem; as AAKG is extracted from Arginine, it’s not likely to be effective in Cellucor NO3 Ultimate.

Ultimately, anything that’s taken from Arginine (and Arginine itself) has shown to have poor absoprtion rates in studies (making AAKG an ineffective addition to Cellucor NO3 Ultimate).

Anyway, as we mentioned, anything containing or extracted from Arginine has a poor absorption rate. For this reason, Arginine Nitrate is likely to be ineffective in Cellucor NO3 Ultimate too.

As there’s been no studies conducted on this ingredient, there’s nothing to suggest that it actually works either.

The name of this ingredient is quite self-explanatory. But in case your wondering, this is the seeds taken from the popular fruit, grapes.

You’ve either eaten the fruit, or consumed wine at some point in your life; however, you were probably unaware of the benefits that its seeds can offer (we’ll expand on this below).

We believe this might work, but we can’t say for certain until we see more scientific evidence.

We mentioned wine above, and Resveratrol has even more relevance to the alcoholic beverage enjoyed by many.

Here’s why; if you’ve ever heard the myth that red wine can increase your lifespan, it’s because it contains Resveratrol. But don’t get your hopes up yet – no study has actually proven that Resveratrol actually works…

After researching about this ingredient, here’s our conclusion; although Resveratrol won’t make you live forever, it can improve your general health. But this isn’t why you’d take a pre-workout for (that’s why multivitamins exist).

For these reasons, we don’t think Resveratrol is needed in Cellucor NO3 Ultimate here (but it doesn’t cause any side effects, so it’s not the worst nutrient either).

We probably sound like we’ve been very negative towards Cellucor NO3 Ultimate in this review. So we’ll explain which ingredients have proven to be the best in pre-workout supplements. 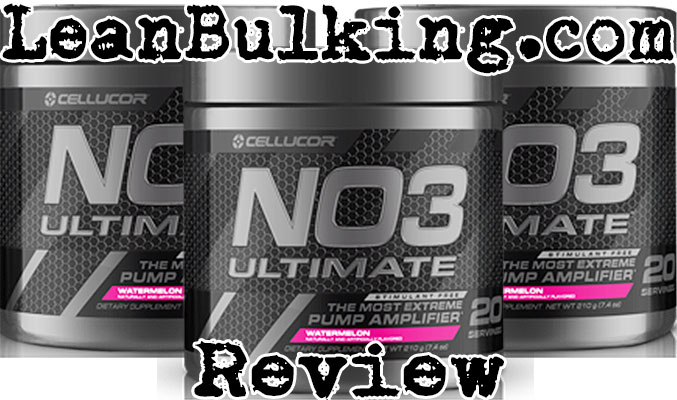 Although Cellucor NO3 Ultimate doesn’t seem very likely to give you those ‘boosts’ to break your personal records or train harder for longer – it doesn’t contain any ingredients that cause any side effects.

So we can praise Cellucor for this; we really don’t like when companies add ingredients that’ve been reported to cause side effects into their products.

As we mentioned at the start, we don’t understand why a pre-workout only designed to improve your muscle pumps has been priced so highly (at $49.99).

This price makes Cellucor NO3 Ultimate compete with the highest rated pre-workouts on the market. But the difference is that other pre-workouts deliver enhanced energy levels, strength and endurance, as well as muscle pumps.

For this reason, we don’t believe Cellucor NO3 Ultimate is good value for money at all. If you’re paying $49.99, you might as well choose a pre-workout that delivers many benefits to improve your gym sessions, instead of just 1 benefit.

For the same money, you can buy the highest rated pre-workouts that offer numerous benefits to help you achieve your dream physique.

However, ending on a positive note; we’re glad that Cellucor NO3 Ultimate doesn’t contain any ingredients reported to cause any side effects.