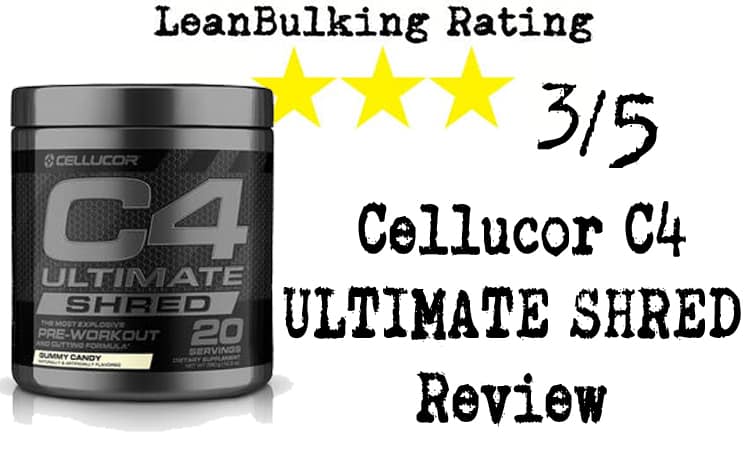 C4 Ultimate Shred is another addition to the well-known C4 series of pre-workouts by Cellucor. Back when there weren’t as many options as there is now, the original C4 was the ‘go to’ pre-workout available. So it’ll be interesting to see how much of an improvement this C4 Ultimate Shred is to Cellucor’s line-up.

It certainly sounds like a tasty product, as it comes in 20 serving containers for $49.99, in 2 flavor options – Gummy Candy, and Strawberry Watermelon. So you can see that C4 Ultimate Shred’s price tag makes it compete with the premium options on the market.

In this review, we’ll help you determine whether this pre-workout is worth trying out by providing our honest opinion; this will include a detailed analysis of C4 Ultimate Shred’s ingredients, safety, and effectiveness in this review.

From first impressions though, C4 Ultimate Shred looks like a good product. We’re happy that Cellucor has added an optimal dosage of Citrulline Malate, which is definitely a highlight of this pre-workout supplement.

Anyway, we’ll expand on this in the next section. But first, we’ll tell you more about the company behind it (for those new to the supplements game).

If you’re into fitness and bodybuilding, then you’ll definitely know about Cellucor. They’re one of the ‘big boys’ of the industry, and for good reason – they’ve been around for a while and sponsored some big names in the industry; their list of sponsored athlete has included Calum Von Moger and Jen Jewell in the past.

Not only that, Cellucor became extremely well-known for their original C4 pre-workout. While this is still a popular product on the market, Cellucor has since released numerous different versions of C4, which have been a mixed bag in our honest opinion.

But we’re not here to talk about other supplements. You’re here to learn more about Cellucor’s C4 Ultimate Shred, so let’s stop wasting time and see which ingredients have been added in the section below…

Even from first glance, you can see that C4 Ultimate Shred contains tons of ingredients. We have mixed opinions about this, as we prefer supplements to contain fewer nutrients in better dosages.

However, that doesn’t mean that Cellucor hasn’t dosed the ingredients in their pre-workout, C4 Ultimate Shred, correctly. In fact, we’re very happy to see that Cellucor has included an optimal 6,000mg dosage of Citrulline Malate, which we believe is essential for delivering enhanced muscle pumps in the gym – to help inflate your guns while you bicep curl!

There are other positives that you’ll find out shortly afterward in this section, but there are also some negatives too. One of the negatives being that Cellucor contains a proprietary blend (we’ll explain more in the red box just below):

Proprietary blends are mixtures of numerous ingredients that are only shown to you as 1 quantity. As you can see from the ‘C4 Ultimate Shred & Thermogenic Matrix’ on the ingredient list below, the overall amount is 1.334g – but you’re not shown the dosages of each ingredient inside such as Theacrine or Rauwolfia Vomitoria Extract.

Why is this bad? Well, we believe that this increases your risk of side effects such as jitters, and also makes it uncertain whether this pre-workout will work. For this reason, we try to avoid any supplement that contains proprietary blends.

So now you have our honest opinion on proprietary blends being used in supplements. We are disappointed that Cellucor has included a proprietary blend in C4 Ultimate Shred, as we’ve seen other companies cut-them-out of their products recently.

Anyway, we’re not here just to focus on the negatives. So we’ll take you through each ingredient in C4 Ultimate Shred. By the end of this review, you’ll have a good idea of how safe and effective this pre-workout supplement really is. 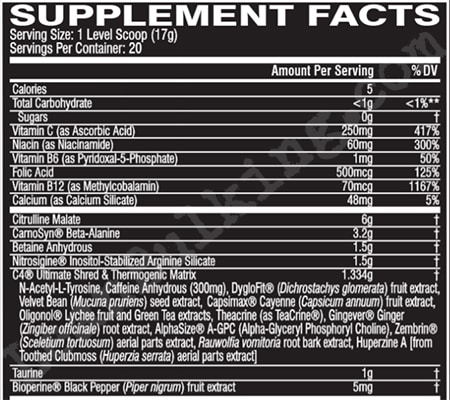 We’ve already mentioned that we love Citrulline Malate. Just take an optimal dosage of Citrulline Malate before your workout and you’ll see why; you’re muscles will look and feel bigger, and the pump even helps reduce muscle fatigue & damage too.

How does it work? Well, Citrulline converts into L-Arginine once in your kidneys, which increases your nitric oxide levels. This results in enhanced blood flow, which helps your body push more blood and oxygen into your muscles as you pump iron (that’s the short, not-as-boring version without getting too into ‘science’ anyway).

So you might be thinking to yourself, ‘why not just take L-Arginine directly?’. Well, there’s a reason for that; L-Arginine has a poor absorption rate when orally consumed, while Citrulline doesn’t have any issues with this.

Now, Citrulline Malate certainly works, but studies have shown that it only works when it’s consumed in dosages of 6,000mg or above. Cellucor has clearly completed their research here, as they’ve added the optimal 6,000mg amount in C4 Ultimate Shred.

You can’t really argue with this, and Citrulline Malate is one of the key ingredients that we look out for in pre-workouts. So great job by Cellucor here.

If there’s one nutrient that divides the crowd, then it’s Beta-Alanine; this is because Beta-Alanine has shown to enhance your muscular endurance, but also cause itchy & tingly skin too.

In case you’re wondering, this itchy side effect is officially known as ‘paresthesia’. And if you don’t believe us, then you can check out one of the many studies that prove it here: https://www.ncbi.nlm.nih.gov/pmc/articles/PMC3491570/

However, it’s not all bad news. We found paresthesia quite distracting at first, but after testing numerous pre-workouts containing Beta-Alanine, you get used to the sensation.

Anyway, if you clicked through to the study, then welcome back. Let’s get back to the review about C4 Ultimate Shred here.

We do know many lifters that don’t mind this side effect; as you can see, it really is up to individual preference, so we’re not going to make a general analysis of Beta-Alanine here.

But we’ll repeat that this is simply our preference, so don’t get mad if you’re a fan of Beta-Alanine.

We just mentioned that Beta-Alanine is effective but causes a side effect. Well, the bad news is that Betaine Anhydrous hasn’t really proven itself. AND it can cause a side effect: fishy odors in your breath and sweat.

Let’s be honest, no-one wants to smell fishy in the gym, and we know females that would especially stay away from this side effect. Now, it is believed that Betaine Anhydrous improves protein synthesis and also enhances fat loss – sounds pretty good right? Well, in our opinion, it’s because it’s too good to be true.

Why? Well, there have been many studies that show that Betaine Anhydrous has no effect on protein synthesis or fat loss. You can see one of the failed studies titled ‘Creatine but not Betaine supplementation increases muscle phosphorylcreatine content and strength performance’ here: https://www.ncbi.nlm.nih.gov/pubmed/21744011 – the title pretty much says it all, that Creatine works and Betaine Anhydrous is unreliable.

For this reason, we personally prefer Creatine Monohydrate over Betaine Anhydrous.

In case you’re wondering, this is a patented form of Inositol Stabilized Arginine Silicate. We usually prefer non-patented forms of nutrients because they cost companies less to add, therefore allowing them to offer supplements at a lower price. But in terms of effectiveness, we don’t believe that this makes a difference, in our honest opinion.

The good news is that Inositol Stabilized Arginine Silicate is proven to work in numerous studies; it’s shown to enhance energy levels and muscle pumps during a workout at 1.5g dosages. Cellucor has done well by adding the optimal 1.5g dosage in C4 Ultimate Shred here, so we have no problem with this here.

The only questions we’ll ask is this; whether this ingredient is necessary here, and whether C4 Ultimate Shred could have been cheaper without this being included; C4 Ultimate Shred already contains Citrulline Malate (which is proven to enhance muscle pumps) and Caffeine Anhydrous (which everyone knows raises your energy levels).

From now on, every ingredient that we mention is included in the ‘C4 Ultimate Shred and Thermogenic Matrix’ proprietary blend. This means that you’re not shown the dosages of nutrients in this blend unless Cellucor has specifically chosen to show you.

The only ingredient’s dosage that Cellucor has shown you here is Caffeine Anhydrous. This is good, as we always want to know exactly how much Caffeine we’re consuming, to try and avoid jitters and energy crashes.

But the bad news is that Cellucor has added a HUGE 300mg dosage in C4 Ultimate Shred; this would put us at risk from jitters, as we try not to consume dosages of Caffeine Anhydrous higher than 200mg at once.

Not only that, on top of the big Caffeine Anhydrous dosage, Cellucor has chosen to add numerous other stimulants including Theacrine, Rauwolfia Vomitoria Extract, and Huperzine A. These nutrients all increase your risk of suffering jitters, in our honest opinion.

In fact, the only really beneficial and necessary ingredient that we can see in this proprietary blend is L-Tyrosine; L-Tyrosine is known for being a ‘brain booster’ that boosts your focus, which can strengthen your mind-muscle connection.

So overall, we’re not really fans of the addition of the proprietary blend in C4 Ultimate Shred.

We’ve grouped these 2 ingredients together because we believe that they are the ‘bonus’ additions to C4 Ultimate Shred.

So while these 2 ingredients aren’t going to ‘make or break’ C4 Ultimate Shred, they are good ‘bonus’ features here. 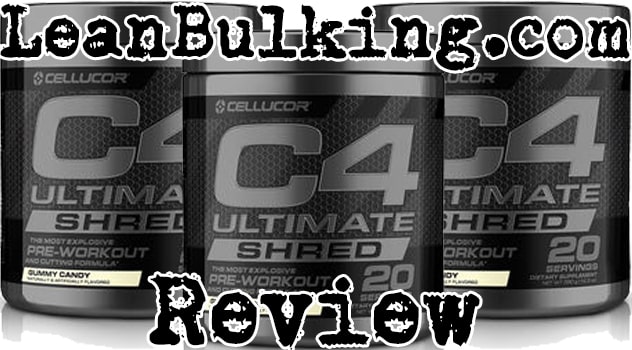 Cellucor C4 Ultimate Shred is, for the most part, a safe and effective pre-workout supplement. However, there are a few ingredients that let this product down, in our honest opinion.

While Caffeine Anhydrous can be a key addition to pre-workouts, Cellucor has chosen to add a massive 300mg dosage; this would put us, personally, at risk of jitters and energy crashes. And this risk is increased due to Theacrine, Rauwolfia Vomitoria Extract, and Huperzine A being included in a proprietary blend.

Also, we will mention that Beta-Alanine can cause paresthesia (itchy and tingly skin).

Here are the potential side effects of taking Cellucor C4 Ultimate Shred Pre-Workout:

It’s clear to see that C4 Ultimate Shred is another very respectable addition to Cellucor’s C4 series of pre-workout supplements. In fact, this has got to be one of the better ones that we’ve seen released recently.

There is a lot to like about C4 Ultimate Shred; this includes the optimal dosages of Citrulline Malate, Beta-Alanine, and Inositol Stabilized Arginine Silicate – all of which have shown to benefit your workout.

However, some of the issues that we have with this pre-workout are that it contains an overload of stimulants (which put some people at risk of jittery side effects, in our honest opinion). Also, we wish that Cellucor didn’t add the proprietary blend in C4 Ultimate Shred either; we always prefer knowing the exact dosages of each ingredient that we put into our body.

While there are positives to C4 Ultimate Shred, the negatives let this product down – especially when Cellucor are asking for the premium $44.99 price-tag.

For this reason, we don’t believe that C4 Ultimate Shred can compete with the highest rated pre-workouts available right now.