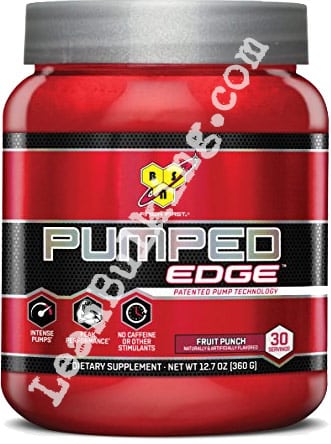 Pumped Edge is a pre-workout marketed by well-known supplements company, BSN. It comes in 30 serving containers, with a serving size of 12g.

This is BSNs latest pre-workout supplement (2017) - which has been engineered for extreme muscle pumps.

The main thing to note about this product, is that its stimulant free.

The company behind this pre-workout, BSN, are no strangers to the supplements industry. Theyve been around since 2001, and have endorsed some big names - such as Conor McGregor and Flex Lewis.

BSN has a great reputation, marketing a range of supplements from protein powders to pre-workouts - their NO-Xplode pre-workout was a huge success. But can Pumped Edge beat its precursor?

Read on to find out.

If you dont know 90% of the ingredients inside Pumped Edge - youve come to the right place, as weve analyzed each ingredient for you.

But first, we need you to know that this contains a proprietary blend…

A proprietary blend is a mixture of numerous ingredients - shown to you as one quantity (in this case, its 3g).

This causes a few problems, as you dont know the exact dose of each ingredient in these blends; simply put, you dont know how effective they are, or if theyll cause any side effects -which is why its important to know exactly what youre putting into your body.

Basically, companies often use proprietary blends to hide ineffective dosages - so you dont know youre getting bad value for money. This allows them to keep the price of their supplement high, while cutting costs to make more profit (making proprietary blends one of the biggest gimmicks in the industry).

Anyway, well explain the most important ingredients in this pre-workout - to show you exactly how effective Pumped Edge is.

This is a proprietary blend consisting of two ingredients, L-Citrulline and L-Arginine:

This nutrient raises your nitric oxide levels by turning into L-Arginine in your kidneys, after oral supplementation.

Its better than taking L-Arginine directly. Why?

Answer: Because L-Arginine has a poor absorption rate - meaning its ineffective when orally supplemented.

As you can see, its impossible for there to be an effective dose of L-Citrulline in Pumped Edge - as this whole blend only adds up to 3,000mg (3g).

BSN Shouldve left L-Arginine out, and increased the dose of L-Citrulline to 6,000mg.

But theres been no human studies conducted to prove that it delivers this benefit. Anyway, heart health isnt a key feature of a pre-workout supplement.

It doesnt offer improvements in strength, endurance, muscle pumps, or energy - so Hawthorn Extract is a useless ingredient in Pumped Edge.

This herb has been used in traditional Chinese medicine - its incorrectly believed to increase lifespan.

Studies have shown that it wont make you immortal, but itll benefit general health.

But a boost in general health isnt a key feature of a pre-workout supplement - basically, its useless in Pumped Edge.

Everyone knows what this is, as its used to make food taste better worldwide, on a daily basis.

But you probably didnt know this - it improves the absorption rate of other ingredients its consumed with.

Basically, Black Pepper Extract can boost the overall effectiveness of a product. But its not a miracle worker - its only really beneficial if the other ingredients are actually useful.

As theres not any key ingredients in optimal doses in Pumped Edge - it wont have much of an effect here.

Black Pepper Extract is more of a bonus, than a key ingredient itself.

Youll never know the exact dose of each ingredient in this Muscle Support Matrix blend - this is worrying if youre sensitive to any inside.

With this in mind, lets take a look at whats inside…

All You Need To Know About This Blend

It contains 3 forms of Creatine, but the only one proven to be effective is Creatine Monohydrate.

This is bad - this blend could be filled with the other two forms, making it unreliable. Simpy put, BSN shouldve just added Creatine Monohydrate on its own, without it being in a proprietary blend.

Creatine Monohydrates shown to improve your strength and endurance in the gym, but the other forms (such as Hydrochloride) arent proven to work. 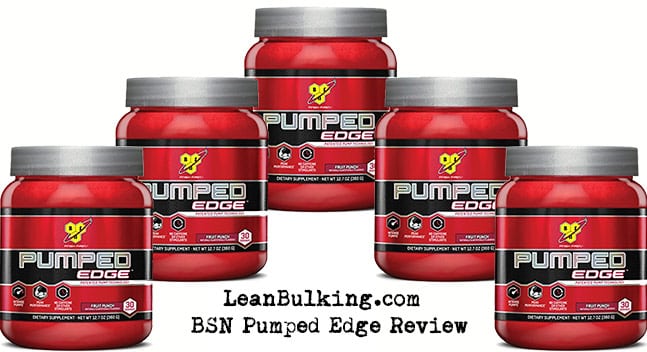 One good thing about Pumped Edge is that not many ingredients cause side effects. The only concern is with Hawthorn Extract - theres been no human studies conducted.

Basically, this means we dont know how effective it is, or whether it can cause any side effects.

Heres the potential side effects from taking Pumped Edge:

This is a disappointing product from BSN, and we expected more from a company as reputable as them.

Im not going to waste your time - Ill get straight to the point.

Heres why its 2 stars: