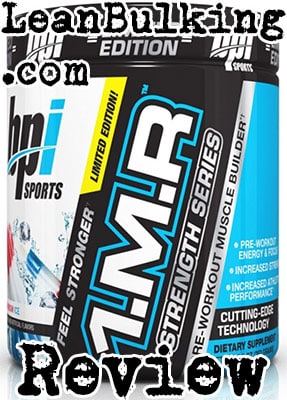 1MR Strength Series is a pre-workout by BPI Sports. It costs $29.95 for 30 servings, making it a reasonably priced product, available in 2 flavors – Fierce Blue Lemon and Rainbow Ice.

Our first opinions of 1MR Strength Series is pretty good; you can see the exact dosage of most ingredients, apart from 2, but the good news is that they’ve offered the amount of caffeine inside.

Anyway, we’ll expand on this and more in the next section, where we’ll analyze 1MR Strength Series’ nutrient profile for you. But first, we’ll tell you more about the company behind it.

Who are BPI Sports?

BPI Sports are a well-established supplements company based in the USA. They’ve marketed loads of products in the past, but they’re most popular creations are probably their pre-workouts – so we’re expecting big things from 1MR Strength Series!

Apart from that, their ‘about us’ page didn’t give us anymore information about their company, so see which ingredients are inside 1MR Strength Series below…

BPI Sports’ 1MR Strength Series contains 8 ingredients overall, which isn’t a bad number of ingredients to have in a supplement; we always consider over 10 nutrients to be ‘too many’ as this leads to companies underdosing nutrients.

However, one problem we have is that 1MR Strength Series contains a proprietary blends (we’ll expand on this below).

Proprietary blends are mixtures of numerous ingredients that’re only shown to you as 1 quantity. As you can see from the ‘Liposomal Matrix Delivery System’ on 1MR Strength Series’s ingredient list, the overall amount is 500mg – but you’re not shown the dosages of each ingredient inside such as Phytosterol.

But on a positive note, we like that BPI Sports have included a big dosage of Vitamin D3 in 1MR Strength Series; this has shown to deliver improvements to your general health, and even testosterone levels.

Anyway, we’ll take you through each ingredient inside 1MR Strength Series. By the end of this review, you’ll know exactly how safe and effective this pre-workout really is. 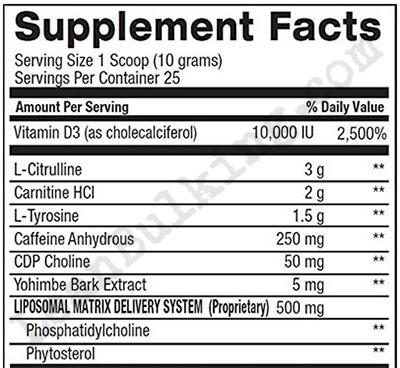 L-Citrulline is a great addition to any pre-workout, due to its ability to enhance your muscle pumps.

How does it work? Well, L-Citrulline raises your nitric oxide levels once in your body, which has a direct effect on your blood flow – allowing more to fill your muscles.

Apart from making you feel invincible in the gym, this also improves your muscular endurance too. Not bad, eh?

But one small criticism is that we prefer Citrulline Malate; this is simply L-Citrulline bound with Malic Acid, which is able to enhance your strength due to raising your ATP levels in the gym (similar to how Creatine Monohydrate works).

BPI Sports have clearly done some research into what makes pre-workouts tick, as L-Carnitine is another great addition to 1MR Strength Series here.

Why? Well, L-Carnitine has proven to reduce muscular fatigue and damage, while improving your focus in the gym too.

Not only that, BPI Sports have dosed L-Carnitine well here (studies have shown you need between 500mg-2,000mg for it to work). Good job by them.

L-Tyrosine is a ‘brain booster’ nutrient that’s commonly added to nootropic supplements. However, it’s not as necessary in pre-workout supplements, as Caffeine & L-Carnitine offers enough boost in focus to benefit your gym session.

The only reason you’d need this in the gym, is if you often forget your wife’s shopping on the way home…

But in all seriousness, while L-Tyrosine isn’t needed in 1MR Strength Series, it can be a good ‘bonus’ ingredient to have here.

In case you’re wondering, ‘Anhydrous’ simply means that Caffeine has been dehydrated into powder form, so it can be added to supplements.

It’s a pure form of Caffeine, so providing that the company shows you the dosage of Caffeine inside, you’ll always know the exact amount you’re consuming this is important, so you avoid side effects.

But the bad news is that BPI Sports have added a big 250mg dosage of Caffeine in 1MR Strength Series; this increases your risk that you’ll suffer from jittery side effects in the gym.

For this reason, we always advise that you choose pre-workouts containing less than 200mg Caffeine per serving – to stays safe.

Citicholine is a nootropic compound that converts into Choline after you consume it.

While this is effective at improving your memory and cognition, you don’t really need this in the gym. Not only that, consuming Choline during exercise isn’t great; it’s known for making your sweat smell fishy, which isn’t what you want.

For this reason, we wouldn’t even consider this a good ‘bonus’ to have in 1MR Strength Series.

Yohimbe is the worst ingredient in 1MR Strength Series by far.

Why? Because it’s been commonly reported to cause side effects, and the main compound inside (Yohimbine) has been banned from direct use in supplements.

We’ll acknowledge that Yohimbe Bark Extract has shown to slightly promote fat loss, but it’s at the cost of side effects; if your main aim is to get shredded, then we recommend looking at safe fat burner supplements instead.

We mentioned that 1MR Strength Series contains a proprietary blend…well, here it is.

As with all proprietary blends, you’re only shown the overall amount of the blend, and not the individual amounts of each nutrient inside.

Now, BPI Sports have done well by not adding any stimulants into this blend, so you’re safe from jitters.

In fact, this blend only contains 2 ingredients, which are only believed to improve your cognition and cholesterol levels; these are great benefits, but they’re not going to give you that immediate ‘kick’ you want when taking a pre-workout supplement before hitting the gym.

For these reasons, we don’t consider this proprietary blend to be necessary in 1MR Strength Series. 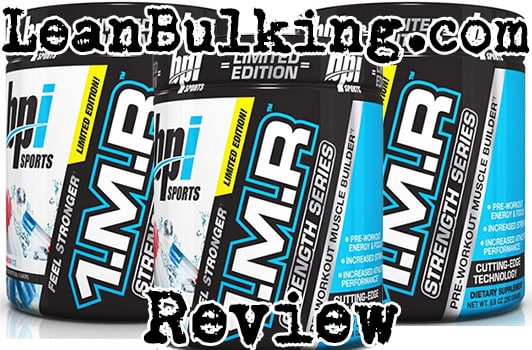 There are 2 main concerns with 1MR Strength Series; the fact that it contains Yohimbe Bark Extract, which is known for causing numerous side effects, and the big dosage of Caffeine inside.

We always advise that you consume under 200mg per serving in pre-workouts, to avoid jittery side effects. And unfortunately, BPI Sports have added a big 250mg dosage of Caffeine Anhydrous, which puts many people at risk (unless you consume 6-8 cups of black coffee regularly).

Here’s the potential side effects from taking 1MR Strength Series:

Our first impressions of 1MR Strength Series were pretty good; we were glad that it contained optimal dosages of L-Citrlline and L-Carnitine, and even a good dosage of Vitamin D3.

However, after delving further into 1MR Strength Series’s nutient profile, we were ultimately disappointed that it contained Yohimbe Bark Extract and over 200mg Caffeine per serving; these are things that are likely to cause most people side effects.

For these reasons, we can’t recommend 1MR Strength Series to you. Instead, we advise you to look at safer options in the highest rated pre-workouts on the market.

While 1MR Strength Series contains some great ingredients, it’s let down by the addition of Yohimbe Bark Extract the most.

There’s no need to risk taking pre-workouts that can cause side effects, when there are safe and effective supplements available.